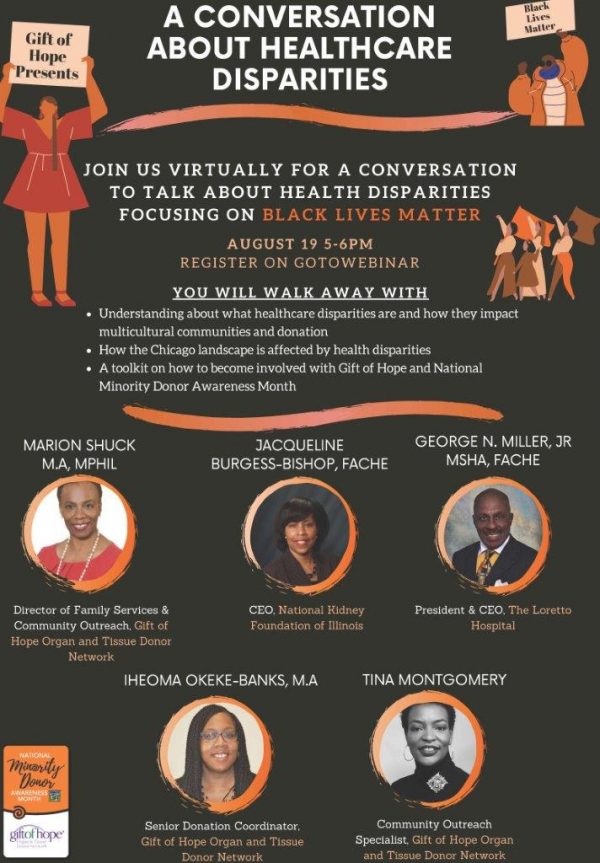 Gift of Hope and Loretto Hospital are celebrating National Minority Donor Awareness Month with a series of activities at the hospital, including an hour-long virtual conversation about health disparities and organ donation on Aug. 19th.

Throughout the month of August, Loretto Hospital will feature local organ and tissue donors on a video montage throughout its internal TV circuit. Viewers will get to meet donors like 18-year-old Evan Porter, a second-year college student and avid musician, who became a tissue donor after dying at Loretto Hospital from cardiac arrest in 2019.

Before he died, Porter wrote a poem titled “My Afterglow,” a fitting description of the lasting legacy he and other donors have left through the gift of donation.

Gift of Hope encourages the community to visit the outdoor donation-themed mural, which cascades over the side of Loretto Hospital, to reflect on the lifesaving gifts of donors and their families.

In Illinois, 1,450 African Americans, 800 Hispanics and 240 Asian Americans are on the transplant waiting list.

Ethnic minorities make up nearly 60% of people waiting for organs in the U.S. but only one-third of registered donors. Because transplant success rates are higher when the organ comes from a donor of the same ethnic background, there is a critical need for African Americans, Hispanics and Asians to register as organ and tissue donors, according to the Gift of Hope Organ & Tissue Donor Network of Illinois.

National Minority Donor Awareness Month (NMDAM) provides the perfect opportunity to spread the word about the need for lifesaving organs and empower minorities to “say yes” to organ and tissue donation by becoming registered donors and by authorizing donation on a loved one’s behalf.

“It is of extreme importance to all of us at Loretto Hospital to honor all of those that have given the ultimate sign of hope, providing the chance to live to another human being,” George Miller Jr., Loretto’s president & CEO, said in a statement.

“This month we want to highlight our diverse community while we continue to raise awareness and invite our residents, patients, family and friends to join the organ and tissue donor registry.”