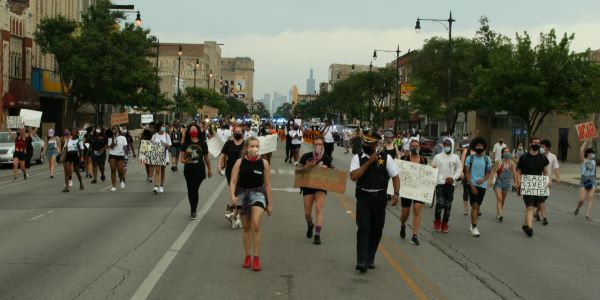 A few hundred people gathered at Columbus Park last weekend for a march in remembrance of Elijah McClain – a 23-year-old African-American Colorado massage therapist who was killed after an encounter with police while walking home – and to protest police brutality.

The march was organized and led by Oak Park activist Danielle Kovack, along with members of the Revolutionary Oak Park Youth League, or ROYAL, a group of middle and high school students from Oak Park that formed in early 2019.

Taylor Montes-Williams, a member of ROYAL, said their goal is to fight for equity in their community.

Montes-Williams said Saturday’s march was focused on the Colorado man because they “wanted to shine light on the fact that even somebody as sweet as Elijah McClain still has to face the wrath of police.”

McClain died in August 2019 after police placed him in a carotid control hold, which restricts blood flow to the brain, and paramedics gave him too much medicine when treating him. He suffered a heart attack on the way to the hospital and placed on life support. About a week later, McClain was removed from life support after being declared brain dead.

Montes-Williams said police see any African American as a threat, “it doesn’t matter how like nice or sweet or kind hearted you are.”

That’s what ROYAL is fighting to change, she said.

On Saturday, the marchers left Columbus Park and started east down Jackson Boulevard.

As the demonstrators walked, bracketed by cars carrying water and snacks at the front and back and cyclists on their flanks, Austin residents shouted support from their front lawns and windows.

A marching band near the back of the group played songs such as “When the Saints Go Marching In,” while people with megaphones at the front led chants such as:

“From the West Side, to the South, CPD we want you out.”

By the time the march reached Garfield Park, police had begun lining the street and blocking off intersections to traffic to allow the demonstrators to safely pass.

After a brief rally at Garfield Park, which included speeches by members of ROYAL and music from the marching band, roughly two-thirds of the demonstrators started west down Madison Street, while the others left.

As they started down Madison, Chicago Police Department Deputy Chief Ernest Cato, a former commander of the 15th District, began walking at the head of the march, despite jeers and insults from some of the demonstrators.

The protest was scheduled to continue directly to the Black Lives Matter mural on Scoville Avenue in Oak Park but made a detour to the CPD’s 15th District headquarters.

Members of ROYAL distributed sidewalk chalk to demonstrators, who then wrote the names of people killed by police on the sidewalk and cement pillars in front of 15th District building.

They held another rally there. Chloe Leach, one of the leaders of ROYAL, spoke about how Black women are targeted in the same way as Black men but cases of police violence against Black women have failed to garner the same public attention.

“Black women are often on the back burner when it comes to the Black Lives Matter movement,” she said.

From the police department, the marchers continued to their final destination, the mural near Oak Park River Forest High School – where the final rally was held.