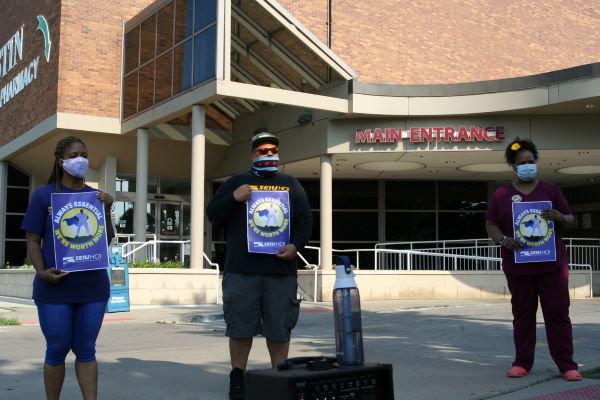 Members of SEIU Illinois stand outside The Loretto Hospital earlier this month to push for an increase in pay and other changes.

SEIU Illinois announced Friday it has reached a tentative agreement on a new contract with The Loretto Hospital.

The new contract will be for three and a half years and be retroactive to December 2019, when the old contract expired.

The contract must still be ratified; union members, who make up about one-third of the Austin hospital’s workforce, will vote Wednesday on the proposed agreement.

SEIU said in a statement the new contract “provides for significant, life-changing wins that will help safeguard workers, their families, their patients and communities.”

Changes include an enforced short staffing premium; a wage of at least $15 an hour for all workers; and regular pay increases based on seniority.

Anne Igoe, vice president for hospitals and health systems at SEIU Illinois, said understaffing has been a particular problem in the emergency room.

“Loretto is a very busy ER. Oftentimes, they’ll get new patients in, and halfway through the shift have to send more patients up to the floor, and that’s when they run into these scenarios of not having sufficient staff.”

Enforcement of the short staffing premium will involve the hospital posting staffing grids to make workers are aware of when they are understaffed based on employee to patient ratios.

When there are too many patients per employee, employees will receive a two to three hour premium on their pay, Igoe said. The short staffing premiums are meant to hold managers accountable and encourage higher rates of staffing, she said.

To address underpaid staff, all entry level employees will start at $15 an hour, with some higher-level positions, such as behavioral health staff, starting between $18 and $22 per hour. Staff will also receive regular raises based on seniority.

“The average raise in the first year of the contract is about $1.30,” Igoe said.

Wellington Thomas, an emergency room technician who has been at Loretto for nearly 14 years, said at a press conference earlier this month he has to work extra shifts as an EMT to make ends meet.

Igoe said Thomas will receive a $1.20 raise in the first year.

In its Friday statement, SEIU said workers will still gather outside Loretto Hospital on Monday morning as part of the “Strike for Black Lives National Day of Action.”

They will be showing “their solidarity for workers across the city and country calling for the resources, wages and workplace protections needed to protect Black lives on the job and in our communities.”

Igoe said worker’s participation in the Black Lives National Day of Action was being done jointly with Loretto and would not impact hospital operations in any way.

Hospital officials declined to comment Friday to AustinTalks but in a statement issued to the Chicago Tribune, Loretto President and CEO George N. Miller Jr. called the deal “fair and equitable,” but he stressed the importance of additional funding for the hospital.