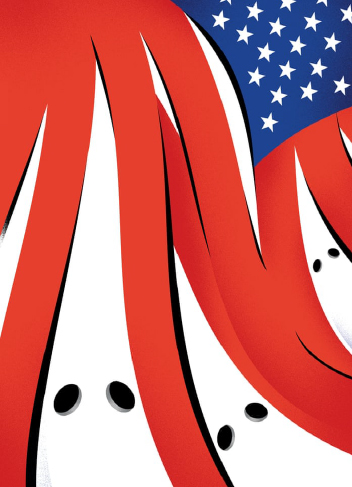 The blindfold has been taken off, and people see the racism that has blanketed the world – and they are disgusted by it.

On the other hand, chaos has spilled into the streets, and the world has lost its entire mind. Is marching with a fist and a sign a 1960s solution for a 2020 problem? Is tearing down a few racist statues the solution?

“I will draw Black Lives Matter on my sidewalk with my kids, and people will know I’m not racist.”

“And I will wear my ‘I can’t breathe’ T-shirt and Tweet catch phrases to show that I’m no sellout.”

Did the Democrats taking a knee change some racist policies?

We know returning back to normal is impossible. So what do we do now?  How do we destroy the sick system and build a world by the people and truly for the people?

Racism is indeed a health crisis. The sick system is the true virus that we need to defeat. But we must destroy this virus within ourselves first.

Is racism or fear our toughest opponent?

Racism seems like it has been around forever and will be here forever. Its like a cockroach. But we will learn how to defeat racism when we courageously face, dominate and defeat our fears.

Candidates have become president by speaking to voters’ fears. The cable news format – briefly highlighting a story and then featuring two opposing views to “discuss” it – keep us at odds and fearful of the other.

Some churches preach that we should fear God and fear going to hell. The first Birth of a Nation film scared white folks to death by convincing them black men wanted to rape their girls and women. That fear still exists. We are controlled by fear.

When I was a kid Russia was the enemy.  The Cold War was in full effect.  People feared a nuclear war would pop off at any time. Russians were the go-to villains in action movies.

In the 1990s, the villain was recast. Arabs became the go-to terrorists in most action films. 9/11 was the exclamation point. People still fear another foreign terrorist attack today, even though they are more likely to be struck by lightning.

Look, I get it. These are scary times. The uncertainty, chaos and incompetent leadership is maddening. “What the f%ck are they doing!?” We have all thought or said.

But in my humble opinion, God and fear cannot exist in the same place; and faith is our currency right now. Faith inspires miraculous actions, faith got our people through slavery, faith ignites revolution.

Our fears keep us at odds. I have more in common with a registered Confederate redneck than any politician in D.C. But many southern white folks fear their heritage is being destroyed with the Confederate flags and statues coming down.

African Americans have been convinced their history started at their kidnapping and enslavement. That is where the cliché, “If you don’t learn your history, you will be forced to repeat it,” comes from.

I hate the thought that my history is nothing more than slavery, struggle, misery and trauma. So I decided to start researching my history before slavery.

Hidden Colors also needs to be a part of your child’s curriculum.

What continent is the Middle East in? The answer is no continent because “the middle east” was created by Alfred Thayer Mahan in 1901 to take the light of the world – Egypt – out of Africa.

Anthony Browder has done some awesome work in Egypt. He created a 19-foot timeline of African history that goes back 300,000 years. Browder said, “If you were to write a 1,000-page book on our history, slavery would start on page 996 and would be two paragraphs.”

When you study your history, your self-worth is enhanced. It is healthy to know your true history.

Gill Scott-Heron wrote a song called The Revolution Will Not be Televised. I know many people believe this revolution is televised, and that is why it is successful. I get that.

But let’s breakdown what this brother truly meant. I was a Scott-Heron fan; I watched him perform in person twice and watched a documentary about him. Scott-Heron said the revolution will not be televised because he believed the revolution must start within each person’s mind.

When we see blatant bloody racism, we tend to react by taking to the streets. A reactionary lifestyle is a dangerous lifestyle. Take a step back and think. Research, collaborate with like minds and plan.

This is the best opportunity we have to destroy this sick system that has created some of the most incompetent leadership this world has ever seen.

This time of quarantine and unrest can feel like hell; I get it. Everybody in your house is working your last nerve; you secretly have never forgiven yourself for what you did (you know what that is), and it’s so noisy in your head with no distractions.

What if you changed your perception? What if you saw this as the perfect opportunity for transformation and tranquility? Embrace this time of solitude and create your metamorphosis. We must not come out of this quarantine the same way we entered it.

Original thinkers are so refreshing. I gravitate to people who have found their rhythm in this crazy world.

Sometimes on my nature walk I see a man dancing; his footwork is on point while he dances on his sidewalk. I remember when I first saw him I thought, “This brotha has figured it out.’”

So many people were scared, and he found his peace in the simplicity of dance. This was in April. I went to the park a couple of weeks ago to practice yoga. When I finished, I saw the same man killing his footwork.

I decided to walk his way to vibe with his energy.  We made eye contact, and he greeted me with a familiar and friendly hello. So different than the familiar mean-mugs I see on the bus.

This man told me that something told him to come to the park that day. He inspired me, and I invited him to join my company’s email list “Real recognizes real.”  [Daryl@Aleadingmanproductions.com]

Use your imagination to paint a new America in your mind. What does it look like without white supremacy? For me, I no longer walk around as a threat. I am judged on my actions by people who know me, not judged by anyone’s fear of me.

My America is filled with wellness and creativity. Originality is celebrated.  Theatre is as timeless and treasured as vinyl records. Success is living your true purpose and a joyful life. My family and circle are love and light beings. Laughing is a spiritual experience, and the stage is a sacred place.

I’m still working on it.

Lucian K. Truscott IV, an ancestor of Thomas Jefferson, wrote about his new America in The New York Times:

“It’s time to honor one of our founding mothers, a woman who fought as an escaped slave to free those still enslaved, who fought as an armed scout for the Union Army against the Confederacy — a woman who helped to bring into being a more perfect union after slavery, a process that continues to this day. In Jefferson’s place, there should be another statue. It should be of Harriet Tubman.”

Daryl Satcher has taught at Columbia College Chicago since 2003 and been a professional actor since 2002. He is a theatre artist/restorative storyteller, having produced, written, directed and acted in three plays. He’s also a yoga instructor and certified in mental health first aid training.