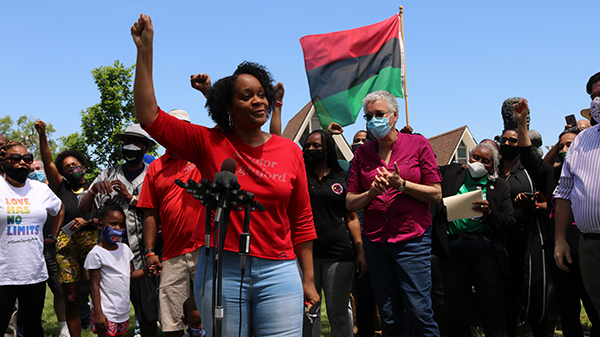 As I made my way to Cicero and Monroe, I saw block after block of boarded-up store fronts and empty lots and buildings in disrepair. Then it dawned on me that parts of the West and South sides of Chicago have looked like this since I could remember — destroyed and abandoned.

When I arrived, the area was surrounded by local residents who, quite frankly, were not interested in yet another spectacle in their neighborhood filled with empty promises and photo opportunities. And I agree with them.

As mothers cried out about the children they’ve lost to gun violence and others screamed about the lack of opportunity, Cook County State’s Attorney Kim Foxx reminded us that those of us who are successful are not exceptions and that we are only seen as such because we are expected to fail.

That was the first of four days of action hosted by the Joint Caucus of Black Elected Officials.

On the South Side, people gathered in frustration with elected officials. Their needs are not being met either, as other areas receive what they need and more. I hear them, and I am frustrated with them.

In the south suburbs, we heard stories from local business owners who have to rebuild after the looting that took place. Illinois Attorney General Kwame Raoul brought a message of no longer hesitating to be unapologetically Black as he had done in the past.

In the western suburbs, local officials discussed disinvestment, the need for better healthcare and education. They asked for help in making their communities a better place.

Those four days in those four locations (including Austin) were a hard reminder that we, the Illinois Legislative Black Caucus, have been tirelessly fighting for the well being of our communities. And still, their needs have not been met.

We have not failed.

To every person who needed to see buildings burning before doing something about racism, welcome to the movement.

To everyone who felt uncomfortable speaking on race issues, welcome to the movement.

To every corporation who made their first statement in support of Black lives, welcome to the movement.

To every young person who took to the streets in protest for basic human rights, you are the movement. Keep pushing.

In the coming days, weeks and months, we will draft bold legislation that addresses inequities in healthcare, education, procurement, job training, community redevelopment and everything in between.

I want our local residents to know that we did not disrupt their day for a show — we disrupted their day for change. We have commitments from the Gov. J.B. Pritzker and Senate President Don Harmon to work with us.

The people have spoken.

Sen. Kimberly A. Lightford is the Illinois Senate majority leader and represents the 4th District, which includes Austin.