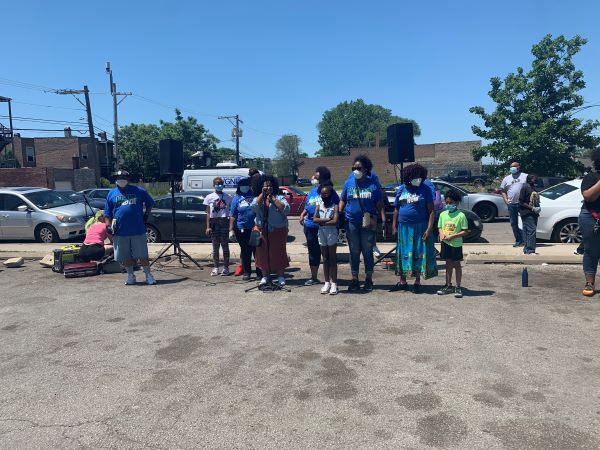 Dozens of people gathered in the Family Dollar parking lot at 4247 W. Madison St. for a resource giveaway and rally last week.

Residents were able to get food, water, masks, diapers, school supplies and other necessities that have become hard to find after looting earlier this month, free of charge.

While people moved past tables filled with necessities, leaders from community groups spoke about how to empower the black community, heal divisions and affect lasting change.

Deborah Harris, who lives in Austin and is Action Now’s executive director, said the idea for a resource giveaway came during their cleanup efforts after the looting.

As Harris and her teamed moved down Madison Street cleaning up trash and broken glass, people began started jumping in to help.

As they cleaned, people told Harris and her team with the stores closed they weren’t sure where they would get food and other basic necessities.

Harris said while Action Now doesn’t generally provide direct services, she knew they had to do something.

They put up a Facebook event for a resource giveaway and rally. Other organizations began to get in touch, offering to work together to collect what was needed.

One of the organizations that partnered with Action Now was BYP100, a national group focused on black youth between the ages of 18 and 35. Jeremy Tyler, chair of their Chicago chapter, says BYP100 looks at issues through a “black queer feminist lens.”

For Tyler, that starts with black liberation.

Harris said the global scale of protests shows everyone is ready to have systems of oppression removed from their governments and communities. “This is our generation’s civil rights movement, and it’s global.”

But it’s going to take hard work to keep the momentum up.

“I believe that people are finally ready to have those conversations. And it’s not going to be easy … to sustain it is going to take deep organizing, deep moments of education.”