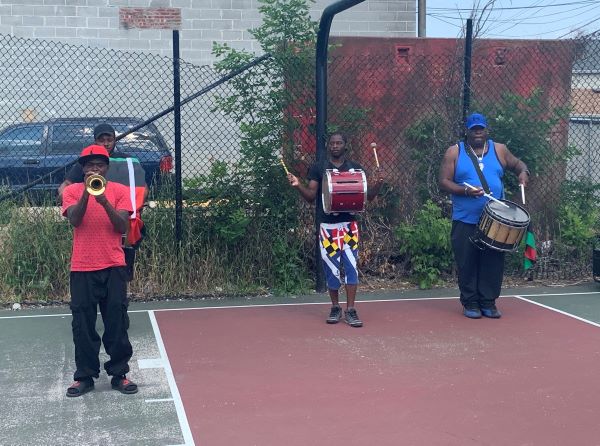 The Exodus Drum and Bugle Corps performed at the Westside Health Authority's Juneteenth celebration on June 19, 2020.

The Austin Peoples Action Center hosted the “heal the land” rally on Chicago Avenue on Friday with food, free supplies including diapers and milk, and performances by Cheri Soul and the Sax Preacher.

On Division Street, the Westside Health Authority hosted a rally of their own with food, T-shirt screen printing and a performance by the Exodus Drum and Bugle Corps.

Myleshia Harvey, who was registering people for COVID-19 testing at the event on Chicago Avenue, explained they were using an antibody test, which shows whether a person has had the virus previously.

After registering, attendees sat at a booth a few feet away where their finger was pricked; results were available after just 15 minutes.

According to the the Centers for Disease Control and Prevention, antibody tests show if a person has been previously infected but “cannot tell if you are currently sick with COVID-19.”

If you receive a positive antibody test and have symptoms of COVID-19, you should get a swab based viral test at a local testing center to determine if you are currently infected.

Juneteenth commemorates June 19, 1865, when Union Army General Gordon Granger announced in Galveston, Texas, that under the terms of the Emancipation Proclamation, all slaves in Texas were free.

Because of its remoteness, Texas was among the last Confederate states to receive news of the Emancipation Proclamation – more than two years after slavery ended.

Morris Reed, CEO of Westside Health Authority, said this was the first time the nonprofit has hosted a Juneteenth event.

They chose to host one this year as a response to the nationwide movement against police brutality and misconduct, sparked by the killing of George Floyd, he said.

Reed said he expects this year “to just be the beginning of Juneteenth celebrations to come.”

Westside Health Authority has made it a paid holiday for their staff, and the organization is advocating for the city and state to recognize Juneteenth as a holiday on par with the July 4th and Martin Luther King Day.

“This is a significant day showing where the country showed liberation for all of its citizens,” Reed said.