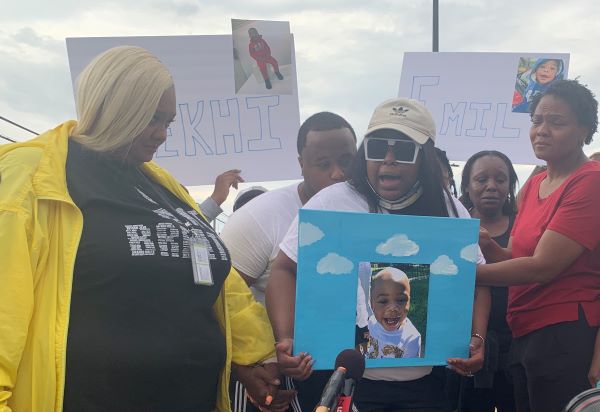 Mekhi James' mother holds a picture of her 3-year-old son who was shot to death in Austin last weekend.

A few dozen people gathered in the rain at the corner of Cocoran and Central Monday evening to remember Amaria Jones and Mekhi James.

They were killed in separate shootings in Austin Saturday night.

She was sitting inside watching TV in her home in the 1000 block of North LeClaire Avenue when a bullet – fired from outside – struck her in the neck.

She was taken to Stroger hospital, where she was pronounced dead, the Sun Times reported.

He was shot when someone opened fire on the car his stepfather was driving in the 600 block of North Avenue a few hours before Amaria was killed.

His mother said at Monday’s rally her son had just gotten his haircut.

Faith leaders and community groups are offering a $13,000 reward for information leading to the shooter who killed Mekhi. The reward is several thousand dollars more than was offered three days ago.

The family also has a GoFundMe page to help cover funeral costs, according to the Chicago Sun-Times.

“We are asking if anybody knows anything — and we really do believe you do — about the whereabouts of this killer, speak now, please speak up,” said Rev. Ira Acree of the Greater St. John Baptist Church. “If you break the silence, we can end the violence.”

Of the deaths, 11 occurred on the West Side, at least four in Austin itself.

Crystal Gartner, who was carrying a sign with that read “#BlackLivesMatter” and the names of African Americans killed by police written on it, said there wasn’t much difference between this weekend’s violence and that of any other weekend.

“This has been devastating our community for decades,” she said.

Gartner has lived in Austin for 35 years.

She said her 12-year-old son has PTSD from a shooting he saw a year and a half ago while walking to school.

Speaking to the crowd about the perpetrators of last weekend’s shootings, Oliver said “they literally committed treason to the black community when they pulled that trigger.”

“They need to be turned in and locked up,” she said.

But, Oliver said, “we can absolutely change the narrative.”

She called on people to “figure out what your place can be in the movement and get in line for it.”