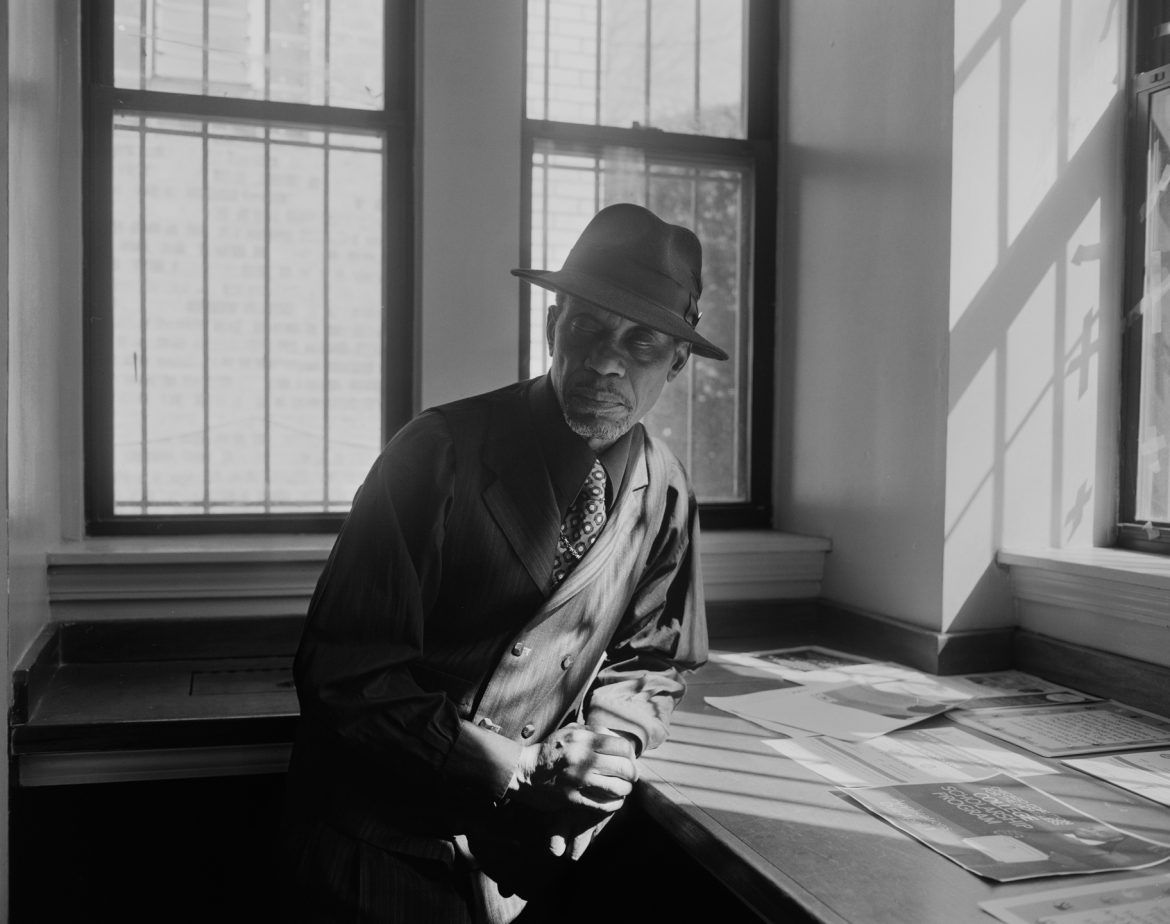 When Sasha Phyars-Burgess began taking photos in Austin, she didn’t know exactly what to expect. The photographer, born in Brooklyn, New York, and raised in Bethlehem, Pennsylvania, took her time getting to know Chicago’s West Side, well aware that “black people are not monolithic.”

She also came to the realization that “a state of a neighborhood doesn’t always tell you who is living there.” Phyas-Burgess said she once painted Austin with one broad brush but has learned, for instance, not everyone is low income, some residents are middle class; and many have lived there a long time, while others are new residents.

“People live full lives, lives full of full moments … People in Austin are just that – people,” Phyas-Burgess told more than 30 people who gathered recently at the Oak Park Public Library to see her photos and learn about the months-long project.

Phyas-Burgess discussed her work “UNTITLED,” a photographic exploration of race, class and space in Austin, which was supported by a short-term summer fellowship from the Black Metropolis Research Consortium. The project captures the ongoing effects of the dramatic changes Austin experienced starting in the late 1960s due to white flight, redlining and economic disinvestment. Phyas-Burgess noted Chicago’s West Side has long been neglected, both politically and developmentally.

“I’ve learned a lot about myself and about African American people in particular since I’ve been here,” she said.

Who do we keep out? Who do we keep in? Those were questions Phyas-Burgess asked herself throughout her time in Austin. And these are questions she continually asks herself as a black person, as a first-generation college graduate, as someone living in Chicago, as an American.

“This is really the story of African American people – perpetually in, perpetually out,” she said, later adding: “How does race and class affect who we even speak to?”

Phyas-Burgess said it really comes down to how we see one another when we meet on the street. White flight in Austin and other neighborhoods began when sharing space with “the other” became too much, she noted, adding that exclusion and profit too often go hand in hand.

“The conditions we see today aren’t natural … they’re man made,” she said, adding that images – no matter how they’re presented – stay with you, which is why Phyas-Burgess tries to be intentional about the images she is creating. “You see so many images every day, but what are the messages of those images?”

Phyas-Burgess, now a visiting artist at the School of the Art Institute of Chicago, is careful about how she represents Austin, because “context is everything.” Too often, “we get ideas about people that don’t have anything do to with their lives,” which is why she strives to depict people with care.

“I’m still learning to be an outsider and an insider (in) the same breath,” she said – and making sure not to assume anything.

She recounted visiting one of the library branches in Austin to attend one of their story times; the librarians were excited to see Phyas-Burgess because so few people go to story time at that location, yet the same event is always packed at the Oak Park Library. Why is that? She was told that because it’s hard for young people to physically get to the Austin library; there’s a need for bus service.

One attendee noted without that information about transportation being a barrier, the assumption might have wrongly been made that black parents don’t care about their children.

Another woman who attended the Feb. 24th talk said moving to Austin a few years back has been an adjustment for her. Residents have to leave the community for events like this photography discussion, Vanessa Stokes noted, and to even go to the grocery store.

“It’s upsetting because of all the disinvestment, but at the same time, I’ve never had (so many experiences with) more open and honest people,” Stokes said. If she needs something, she calls her neighbor – something she’s never had before, including in Lakeview where she grew up.

“That to me, really makes the West Side very special,” Stokes said, adding that it’s unfortunate there aren’t more Austin residents coming together because “there are spaces where we can be together – in Austin.”