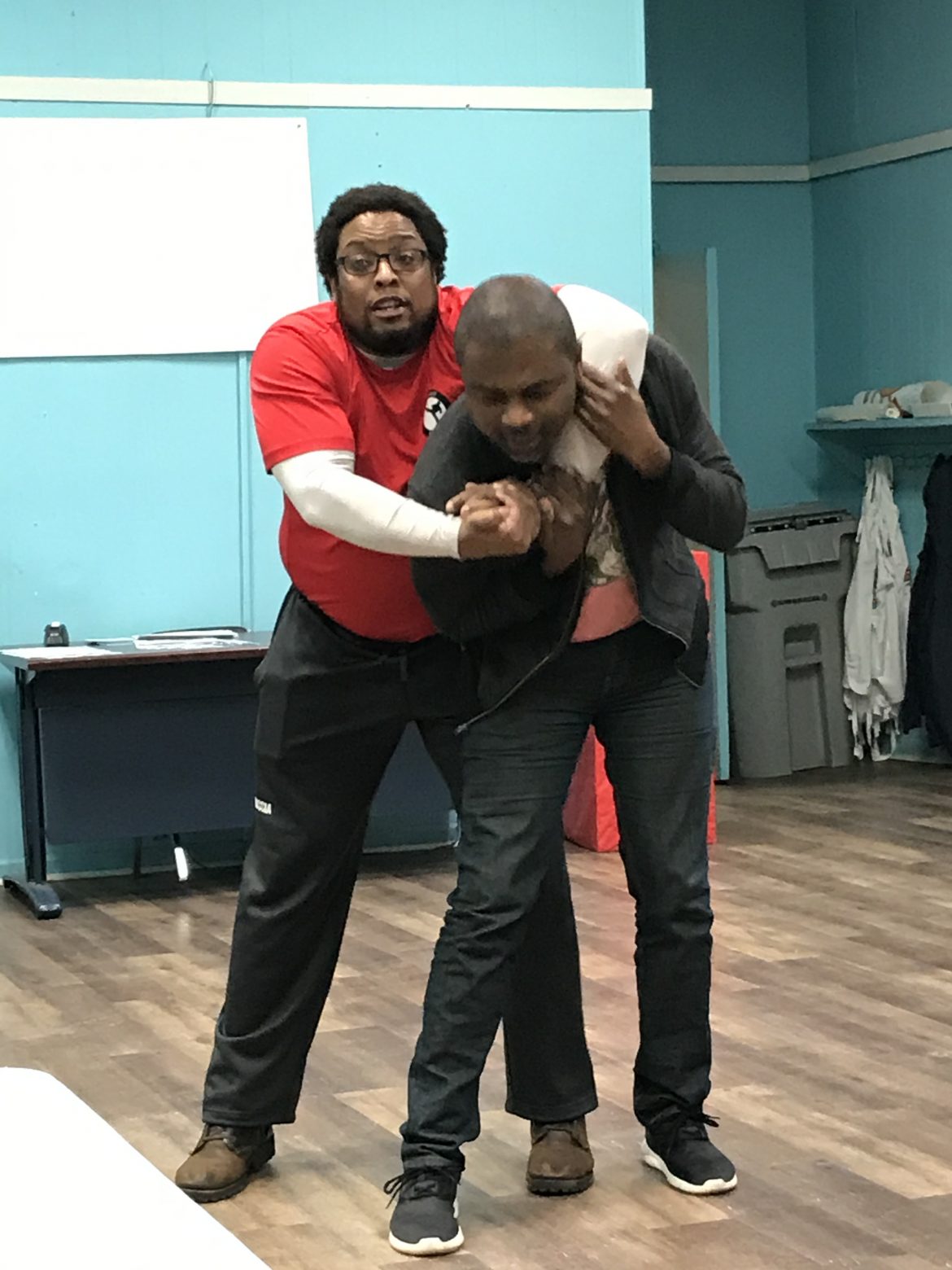 If you’re scared by someone who’s approahced you, step back, put your arms up and say something like: “Watch out there, you’re too close.”

Don’t let anyone take you to another location. And try to face your attacker; don’t let them get you from behind.

Ditch the whistle (which may be hard to blow if you’re frightened); instead carry a small flashlight or a Kubaton, a self-defense key chain about the size of a pen.

Those were some of the tips defense instructor Torriente Toliver shared with about 35 people who gathered Friday night at the Westside Health Authority to learn how to protect themselves from kidnapping and assault. Toliver, a former teacher, is the owner of Mind Body Defense. State Rep. La Shawn Ford organized the free session.

“Self defense is not just about defending your body physically but also about protecting your state of mind,” Toliver said before the nearly two-hour session. “Any situation that makes you uncomfortable is a self-defense situation.”

The key is recognizing when something isn’t right, he said, and having “a technique, some sort of strategy.” It could be learning how to use your arms and your center of gravity to fight off someone much bigger than you, or it could be simply being observant and reporting something out of the ordinary.

Toliver recounted the story of a man who noticed a stranger waiting outside a restroom at a restaurant for a woman to come out then took her and fled. The observer got the assailant’s license plate number and called police, leading the woman to be rescued.

At one point, Toliver invited Rep. Ford to the front of the room to demonstrate some basic techniques, like how to pull away from someone who’s grabbed you; raising your hands and turning your body away from the person is one technique.

Toliver encouraged everyone to practice how to escape or fend off an attacker, and that includes knowing how to use a flashlight or anything else you carry for protection. “You need to have confidence and capability.”

He discussed the three options someone has when in the midst of an emergency: Fight, flight or freeze – the three F’s. “You have three choices: You’re ready to fight, you’re ready to get up or you’re stuck. … The fighting and the flighting both work.”

An all-too-common reaction is to freeze, and that can happen in a couple of ways, Toliver said:  You have too many options or you have no options. One way to break the freeze is to move your body or to say something.

As much as possible, try to face your attacker, Toliver said. Once you’re facing them, it’s a different fight; the offender doesn’t want that. Another tip: The moment you feel anything constricting you, drop your body. Even if you’re just 100 pounds, that weight is not easy to lift if it’s dropping, he said.

Predators use a lot of different tactics. A good way to respond to someone if they get too close to you on the CTA is to extend your arm and tell the person, “You’re too close.” Make sure there’s intent in your voice, Toliver said. Once something has been said, the predator is likely to look for someone else.

A resource predator wants something – a bag, a car, shoes – while a process predators needs to do something because of the way it makes them feel. “They’re going after fights they believe they can win. Once they realize it’s not the same fight, they will back up and look for a different target.”

One woman said she was trained to always have her keys in her hand ready to use if threatened. Toliver said he prefers a tactical flashlight with a strobe or a Kubaton, noting that keys aren’t sharp and in the winter months would not likely penetrate someone wearing a coat. If you have a weapon, you have to practice using it, he said.

The voice can be a powerful tool. Toliver described four ways for someone to use their voice:

Think about the rate or speed at which you’re speaking, Toliver said. Lowering or speeding up the rate can both work, as can using a high pitch versus a low pitch. “Being loud can work, but so can being quiet.”

Tone, or the feeling behind the words, is also important. “When you say something, you have to mean it.”

Perpetrators are looking for bored or distracted targets. That’s why it’s good to have a script at the ready for when someone approaches you or gets too close – something like “Not right now, thank you.”

And if someone does attack you and there are people nearby, say something specific to one of those witnesses. It’s better to make a specific request such as “please call 911 right now” to one person rather than to no one in particular.

No matter what, pay attention and trust your gut: “You need to be able to quickly identify who is either on your side or who is not. And if you don’t feel OK, it’s not OK and don’t try to logic that away.”

Maywood Chief of Police Valdimir Talley Jr. also shared some tips, including having the frame of mind to get yourself home no matter what. “Never ever, ever, ever go to a second location,” Talley said, adding when that happens, it makes it “very difficult” for law enforcement to find the person. “If something happens, you want to stay in place, even if you’re defeated.”

And fighting back is often the best choice, he said, noting that 95 percent of attackers will disengage if the victim fights back.

“Always try to hit a carotid artery or a joint.”

Another meeting on safety will be held on March 6.