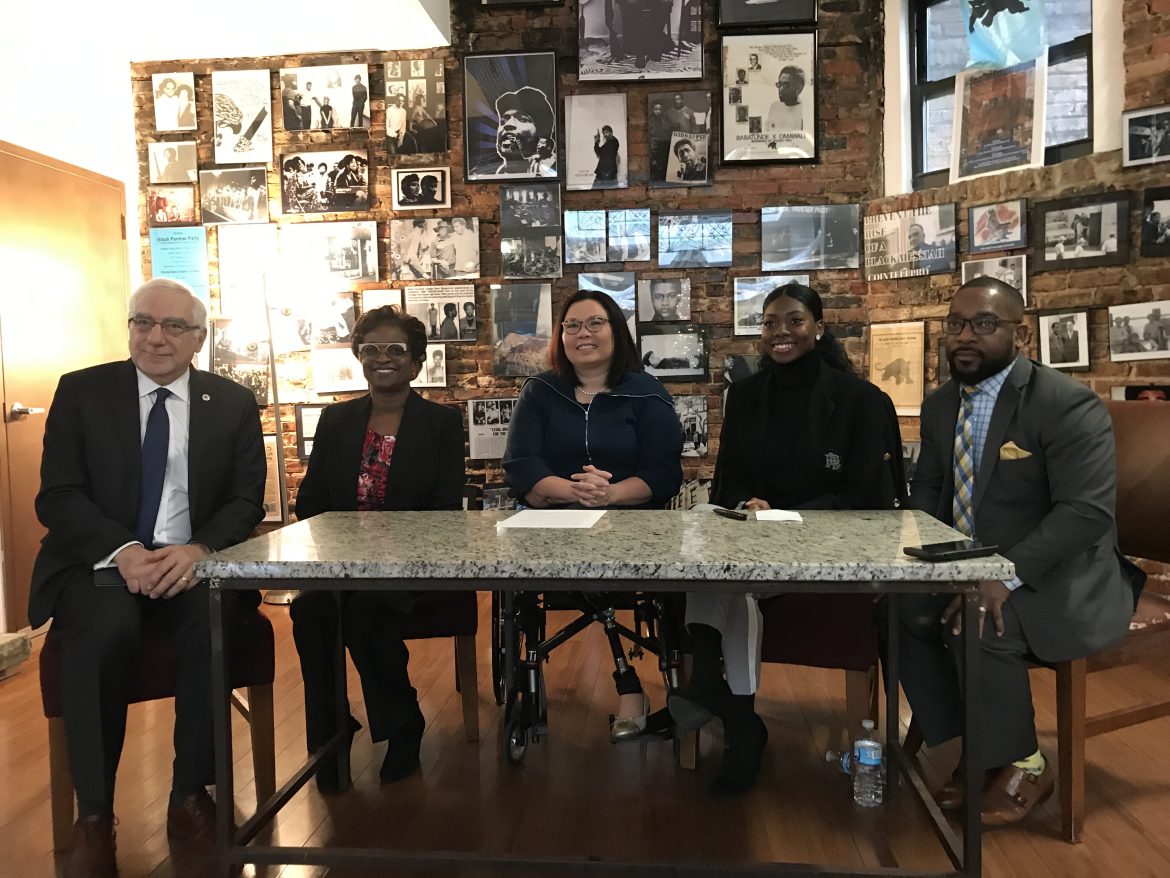 Advocates for federal legislation to lower rates for phone calls made to and from prison addressed the issue Monday. U.S. Sen. Tammy Duckworth (middle) was joined by others advocating for the legislation.

When Wandjell Browning was growing up in Champaign, both of her parents were in prison. Phone calls were the way they kept in touch. But with all the extra charges and high fees tacked onto the calls, she didn’t get to talk to them much, and their relationship suffered.

“This is a basic need – a child needs to communicate with their parents,” said Browning, now 23 and working as a mental health technician at a hospital in Houston. Too many children aren’t able to speak to their parents, and that hurts everyone, she added.

Browning was one of several people this week – led by U.S. Sen. Tammy Duckworth – pushing for support for federal legislation, the Martha Wright-Reed Just and Reasonable Communications Act.

Without this power, the 2 million people incarcerated across the U.S. and their families are forced to rely on a system that lacks competition and often charges unreasonable rates, Duckworth said Monday at a press conference held at the Westside Justice Center.

Though rates have been cut at some jails and prisons, including the Cook County Jail, a call can still cost 10 to 30 cents a minute, plus connection fees, Duckworth said. In all, families can spend hundreds, sometimes thousands of dollars, on these phone calls each year. In some cases, grandparents go without their medications in order to pay for the calls, she said.

Many prisons use this as a way to make money; they pay salaries off the profits from the phone calls, the senator said. “They’re making money off the back of prisoners, some of the poorest people in the country.”

The high cost keeps many of those incarcerated from being able to speak with their families, Duckworth said, adding: “This is unacceptable, and ultimately, it’s counterproductive to our mutual goal of reducing recidivism … the vast majority of those (in prison) will eventually be released.”

Browning remembers a 10-minute call to her mom or dad costing $5. Often, the call was filled with static, and they would hear someone else’s call on their line. Worse of all, eight out of 10 times their call would drop and they wouldn’t be able to reconnect; she’d have to wait until the next week to finish the conversation, to hear her mom’s voice.

The legislation, which has 10 sponsors, both Democrats and Republicans, in the 100-member Senate, is named after Martha Wright-Reed, who began advocating for affordable phone rates more than 20 years ago when her grandson, Ulandis Forte, was in prison and she discovered how expensive it was to keep in contact with him. Wright-Reed sued the Corrections Corp. of American for their exorbitantly high phone call rates, and in 2013, the FCC announced it was capping interstate prison phone call rates.

Forte, who traveled from Washington, D.C., for Monday’s press conference, said he was fortunate his grandmother accepted the expensive collect calls from prison; she knew he needed to remain connected to her and the rest of world outside prison. At that time – in the late 1990s – a call could cost $60, he said.

“Just because someone is in the inside doesn’t mean they can’t positively impact someone on the outside,” Forte said. And “kids shouldn’t have to pay the price.”