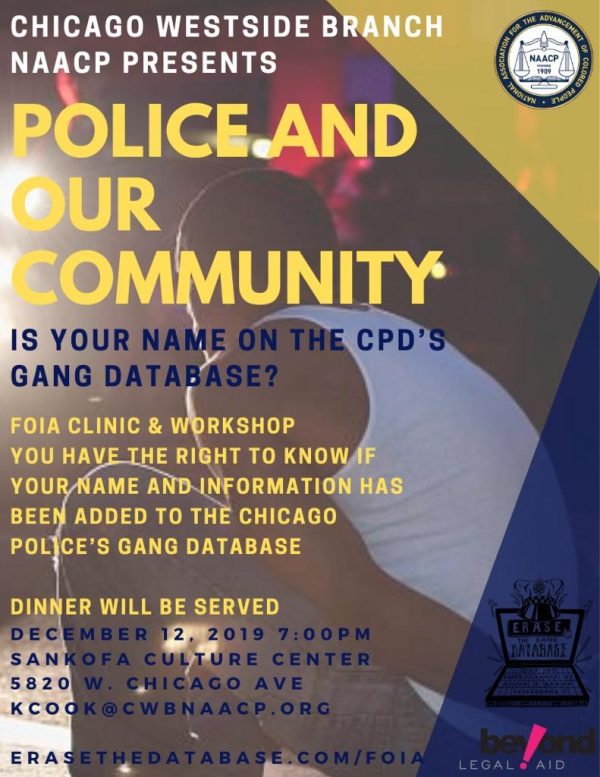 The man hoped to become a sheriff’s deputy. It wasn’t until he submitted his job application that he learned he was one of nearly 200,000 people whose names appear in the Chicago Police Department’s gang database. He was shocked to learn his name appeared in such a database as he had never been in a gang.

It’s not clear how the man’s name got added to the database, which the Chicago’s inspector general has found is riddled with errors. The police department doesn’t notify people when their names are added.

Perhaps he was pulled over in certain parts of the city, where police automatically enter someone’s names, said Allena Bradley, an organizer with Black Youth 100, one of the groups working to eliminate the database.

Others – some as young as 9 years old – have had their names added after a teacher or school resource officer filled out a sheet that ended up going to the police department, Bradley said. And sometimes, information included on contact cards filled out by officers listed gang affiliation that was then added to the database.

Most frustrating of all to Bradley and other advocates who want to get rid of the gang database is there appears to be no way for someone’s name to be removed. That has led a local coalition – which includes Beyond Legal Aid, Black Youth 100, Organized Communities Against Deportations and Mijente – to push for a city ordinance to eliminate the database. It’s been “an an uphill battle, to say the least,” Bradley said earlier this month at a community meeting in Austin.

She and Jacob Cantor, workshop coordinator for Beyond Legal Aid, told attendees that the only way to determine if someone’s name is in the database is to submit a Freedom of Information Act request to the police department.

The two walked through the steps, which are outlined here. Anyone can send an email to foia@chicagopolice.org asking the police department to run a search of their name and birthdate to see if there are any records indicating the person’s name is included in the database.

That’s the only way to determine if someone’s name is in the database, advocates say, because CPD hasn’t set up a process for the public to be informed if they’ve been included.

Cantor said the goal is to get hundreds of people to submit FOIA requests so that CPD sees people want this information. He estimates that about 120 FOIAs have been submitted as of early December, though it’s not clear how many of those people have learned they’re in the gang database.

About 95 percent of the estimated 195,000 individuals in the database, which was created in the 1980s, are African American or Latino; that means about 11% of Chicago’s black population, 4% of its Latino population and just 0.6% of the white population is in the gang database, according to the Erase the Database web site.

“A lot of people don’t know how big it is, how sprawling it is,” Cantor said.

Bradley noted that New York City and Los Angeles have similar databases, but there are fewer people on both of those lists. And some cities have eliminated their lists, including Portland.

A minister from the South Side had just learned about the Austin meeting – the 11th such FOIA workshop the coalition has held – and decided he needed to attend. He remembers being pulled over and seeing from the back of the police car that the officers had information indicating he was in a gang, that he was a gang leader, and he was considered armed and dangerous.

“That wasn’t my story,” the man said, surmising his advocacy work had led to him to being included in the gang database. “How do we combat this?”

One way is to contact aldermen to ask for their support of the proposed ordinance, advocates say. So far, about 11 of the 50 members of the Chicago City Council have signed up, they say.

Another way is to submit a FOIA to see if your name is in the database, but there are risks involved in doing that, including: