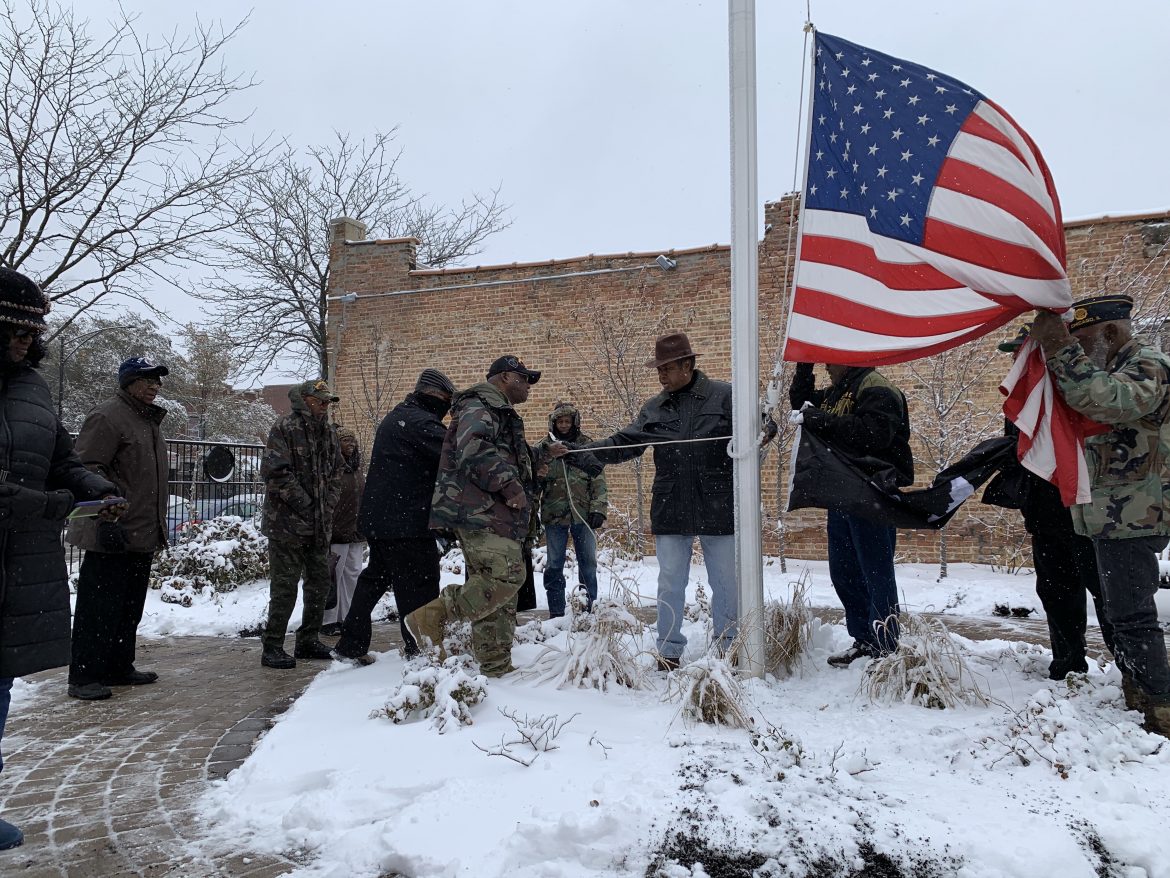 Members of the Austin Veterans Community Organization (AVCO) gathered around at the 29th Ward's Veterans' Garden, 5413 W. Madison St., to raise the flag.

In the midst of snow and freezing winds, about 20 Austin residents – many of them veterans – turned out Monday to celebrate and remember members of the military.

“It’s a day of acknowledgment, so that the people realize that veterans are out here serving the country,” said veteran John Tibbs, 72, who served in the Vietnam War from 1968 to 1971.

He showed up early to the Monday morning event – which was sponsored by the Austin Veterans Community Organization (AVCO) and held at the 29th Ward’s Veterans’ Peace Garden, 5413 W. Madison St. – to help clear away the snow.

Dressed in uniform, veteran Jerry Warren, 73, who served in Vietnam from 1967 to 1969 and received a Purple Heart and two Bronze Star medals, said he wasn’t surprised to see others show up for the event, even in the chilly weather.

“Veterans go far and beyond, and this weather is nothing compared to some of the things that we went through during war times,” said Warren, who also acts as the AVCO’s co-president alongside veteran Murray S. Williams, 64, who served during and after the Vietnam War from 1974 to 1977.

People gathered at 11 a.m. to raise the POW/MIA flag alongside the American flag, then there was a group prayer and the Pledge of Allegiance. Participants had coffee and donuts across the street at MacArthur’s Restaurant, 5412 W. Madison St., where they shared stories from their past as well as information on Veterans’ Affairs benefits.

Founded three months ago with the help of the South Austin Neighborhood Association (SANA), the newly formed Austin Veterans Community Organization was created for veterans and community members in Austin and the surrounding area to talk with each other, share experiences and organize events.

“We have all branches of the [military] in our group … and they all get along and they all tell their stories,” said Cassandra Norman, president of the South Austin Neighborhood Association. “The group was named to also be inclusive of the community, not just veterans.”

Norman hopes the Austin Veterans Community Organization can attract younger veterans to the group and continue to support military members of all backgrounds.

“I was only 14 during the Vietnam War, but I remember a lot of them coming back and the disrespect that they were given, and it’s just nice to try and give them the respect that they deserve,” said SANA treasurer and veteran Terry Redmond, who worked as a refueler mechanic from 1979 to 1983.

Redmond said for the time being, the South Austin Neighborhood Association will support the Austin Veterans Community Organization financially. AVCO also falls under their 501(c)(3) non-profit organization status, which allows them to receive tax-deductible donations.

Group meetings and cookouts will be held on the third Wednesday of every month at noon. Even though they usually meet in the 29th Ward Veterans’ Peace Garden, MacArthur’s restaurant has allowed them to use their space during the winter season.

“We didn’t just serve the United States of America, we serve our communities,” Williams said. “Veterans have a lot to do with the blocks they live on and the community that they live in because they are positive influences.”