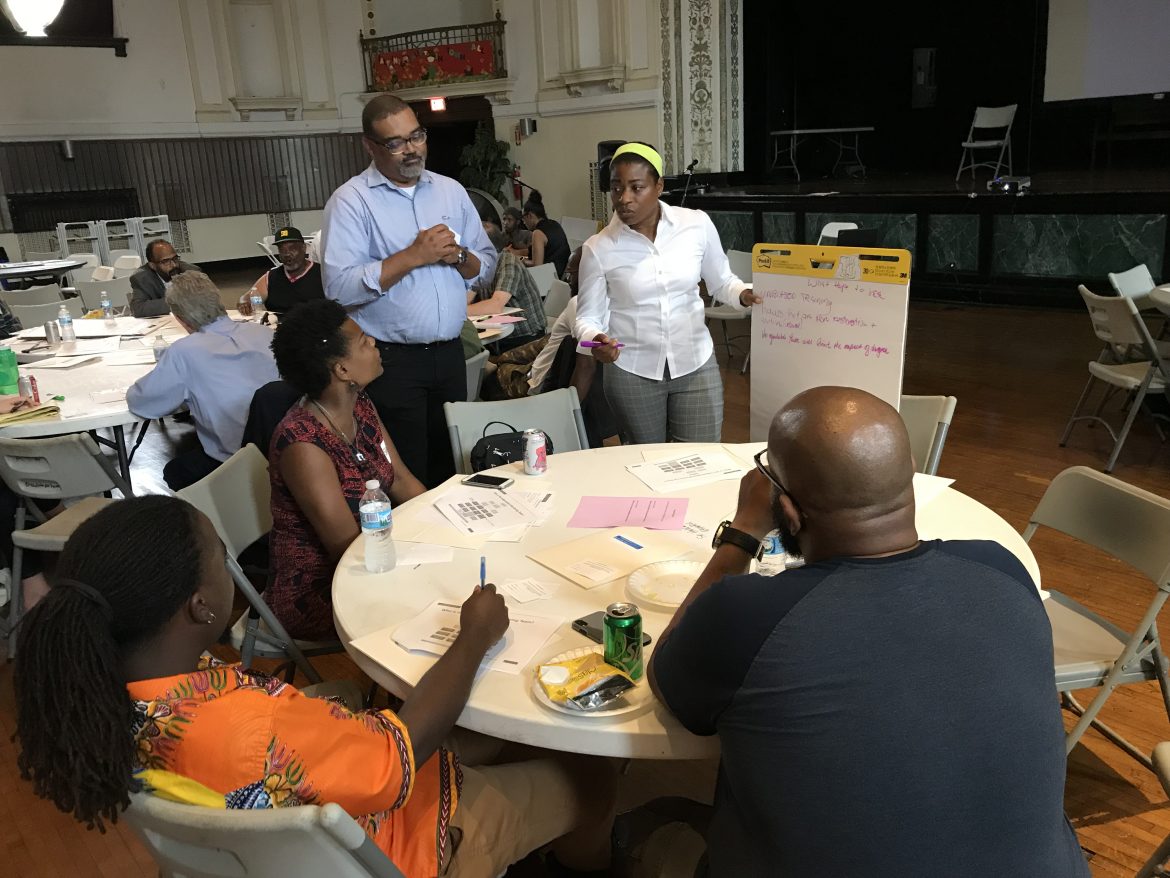 Chicago police need to be given de-escalation and anti-bias training. Officers on the beat should regularly interact with at-risk youth. And the police department needs to be more intentional about its hiring.

Those were some of the suggestions West Side residents offered this past weekend at a community meeting held by the independent monitoring team put in place as part of a federal court consent decree the Chicago Police Department is under.

Sitting at tables in the Austin Town Hall auditorium, about 30 people were asked to answer two questions: What are your hopes for the consent decree, and what are your concerns?

“One hope was that the community, not just in Austin but around Chicago, can begin to really trust and work with the police all the time,” said one woman, speaking for her table.

She said some officers in the 15th Police District have pulled over drivers, but rather than ticketing or arresting them for driving with an expired license have told them they need to get their license renewed. “There was respect and civility,” the woman said, adding the hope would be that “the same thing that’s happening in Austin will happen in other districts in the city.”

A man representing another group at Saturday’s meeting said it’s critical that laws be more equitably written and enforced. “What gets enforced in Lincoln Park isn’t the same as what gets enforced in Englewood. Laws should be applied universally,” he said.

A third group wondered why all of Chicago’s police officers couldn’t also be community policing (CAPS) officers, and there was concern voiced about officers rotating from one district to another without getting to really know any of the communities in which they serve.

Still another group noted that “racial disparities are really at the core of the problem” and warned that making systemic changes to policing in Chicago should not be rushed if it is to be done right. “We must resist just checking a box,” one woman said.

At the start of Saturday’s meeting, the second such community meeting held (the first took place earlier this year in Englewood), the woman leading the court-appointed monitoring team said she’s committed to seeing “true police reform.”

“Tell us where we should be and who we should be talking to … We’re going out to communities every day,” Hickey said, noting her team has been to baseball games, block club meetings and other places throughout the city where people come together as neighbors.

Hickey said she has signed up for this weekend’s Austin POWER 5K run/walk, though she joked she’s not in good enough shape to run the 3.1 miles. “I’m going to walk real fast,” she said.

One man reminded the monitoring team – several of whom attended Saturday’s meeting – that people have endured a great deal, including unjust incarceration, to get to this point where the police department is under federal oversight. He mentioned the shooting deaths of Laquan McDonald and Fred Hampton and the importance of residents being able to meet with the monitoring team.

“Our desire is to have direct contact with you,” he said. “We need direct access to bring out what is going on.”

He said the department has long kept a list of individual activists, including “some of the people in this room,” and he urged the monitoring team to get access to the list, which he said police have refused to share with the public.

That led another person to challenge the monitoring team to get the list the Chicago Police Board kept of people who spoke at the board’s monthly meetings. After the Chicago Tribune revealed that the Chicago Police Department was conducting criminal background checks on community members who signed up to speak at the meetings, the head of the police board denounced the practice.

People whose names appear on the police board list deserve to know “what our rights are, who we can sue, and how can we rectify this situation,” a woman attending Saturday’s meeting in Austin said.