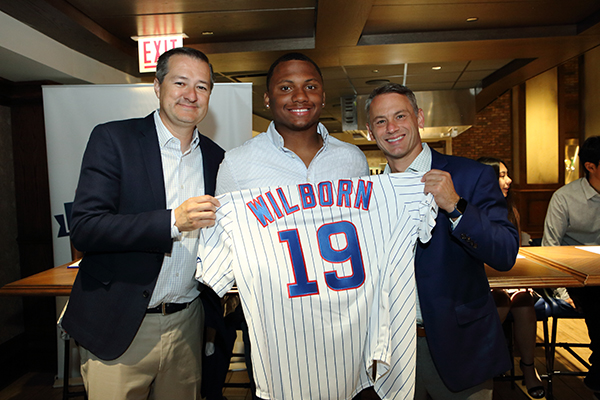 De’Andre Wilborn, a George Westinghouse College Prep senior, was speechless when he got the call informing him he had been selected for the Cubs Charities Cubs Scholars program.

Based on a nomination from Northwestern Medicine Scholars Program, a partner organization with Cubs Charities, Wilborn was one of eight students chosen to receive a $20,000 scholarship to a four-year college or university. The students were honored at a signing day ceremony brunch at Wrigley Field last month where they received a personalized Cubs jersey, met Cubs players and were escorted onto the field before the July 15th game.

“Seeing my name on the jersey, an official Cubs jersey, I was just so happy and smiling the whole day,” Wilborn said.

As an Austin resident, Wilborn said being receiving the scholarship means a lot because not many people on the West Side have the same opportunity. He has not decided on a college or university yet but has narrowed it down to Yale University, Harvard University and Wesleyan University for pre-med and African American studies. Wilborn said he will be the first person in his family to complete college.

“This is an amazing opportunity that a lot of people from my situation are not able to have,” Wilborn said. “This is a dream come true. I am going to fulfill my dreams one day.”

Students are nominated for the scholars program their junior year of high school, and if they are selected, they take part in a college prep program before graduating high school. The program was developed in 2013 after Cubs Charities wanted to direct its donation and charity money toward kids wanting to succeed in college.

Jennifer Nowak, senior manager of Cubs Charities Programs, said the program offers mentorship for the teens along with financial support. This is the first year eight students were awarded the scholarship, compared to five in previous years. In the six years of the program’s existence, 38 students have been helped and more than $600,000 has been awarded.

“We provide a full circle of support,” Nowak said. “The scholarship dollars help the kids immensely, but what sets us apart is the support the kids receive and the family we have built here.”

After being nominated, students complete an application that gets reviewed by Cubs associates, who then recommend the top students for an in-person interview. The scholars are selected on interview night.

Williams said while he was happy to get the scholarship, the best part was seeing the joy it brought his mom and the financial burden it lifted off her shoulders. Williams will attend Knox College in the fall for journalism and said the mentoring he received pushed him toward his dreams.

“It is a great feeling knowing I have someone in my corner who is always just a phone call away,” Williams said. “I have formed bonds, relationships with people that I otherwise would not have been able to make.”

Aside from receiving the scholarship, Williams said it was a big deal to go to a Cubs game and be on the North Side, which he said is a very different experience than being on the West Side. He said he felt a sense of security.

“All of the skills and tools I have learned through Cubs scholars helped me become a more well-rounded person and dig out the path I want for my life and provided guidance,” Williams said.