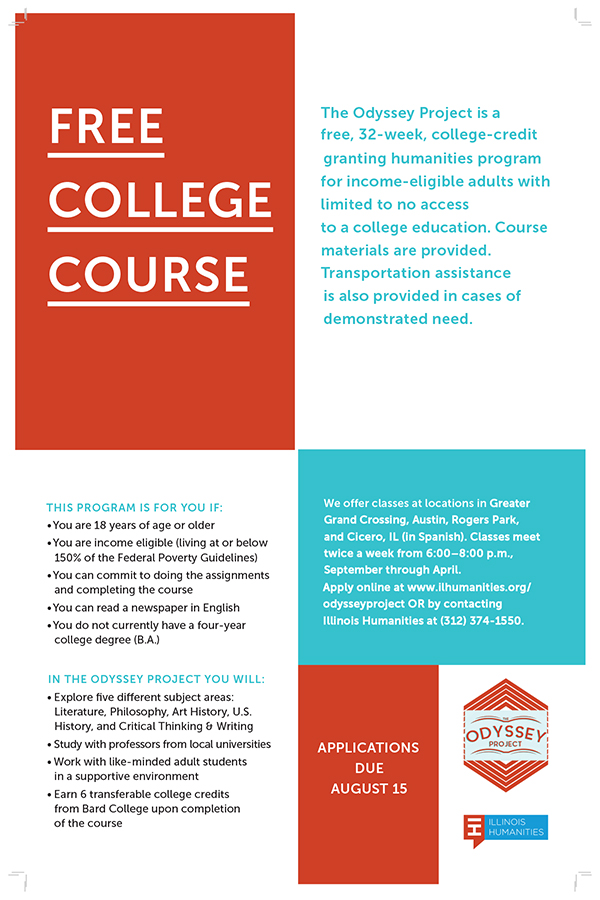 After nearly 20 years of offering a 32-week college credit program, The Odyssey Project will for the first time hold classes in Austin for adults with limited access to a college education.

Through Illinois Humanities, Austin residents can apply to be part of the free program to be held at Austin Town Hall, 5610 W. Lake St. The new location was added to the list that has included Greater Grand Crossing, Rogers Park and Cicero to make the program more accessible for Chicagoans across the city, according to Audrey Petty, director of projects.

“We are committed to welcoming and serving as many students as we can,” Petty said. “We really prioritize locations that are accessible by public transportation.”

Petty said the opportunity to expand the program to the Austin community has to do with equity and offering meaningful and high quality education to adults living on the West Side.

At the age of 55, Mateo Gonzalez said it’s intimidating to go back to school. In 2013, he joined the program, taking a Spanish language course after hearing about it on a radio show. He called and got an interview the next day, going on to attend the class, which was in Pilsen at the time.

“Pushing myself to take the course has helped me in many ways,” Gonzalez said. “I have personally grown as a human being.”

Gonzalez said he never heard of philosophy before taking a class on the subject,  and he even learned aspects of his own culture he had not known before. The program was the first time he was able to communicate with people his age and of different backgrounds in a classroom setting.

“It really opened my eyes to a whole different world,” Gonzalez said.

In September he will finish his fourth year of classes through the University of Chicago Odyssey scholarship program. He said he wants to be involved as much as he can with his community and education, and share it with others.

“It has transformed the way I look at the world,” Gonzalez said. “Without the program I would be the same person I was back in 2013.”

Petty said the number of people accepted for each class location varies; she estimates the Austin location will be able to accommodate about 24 students.

Petty said the program is part of a national collective that revolves around the Clemente Course, which has a strong focus on humanities for adults facing economic hardships.

“We believe these are essential lenses and disciplines,” Petty said.

Toy Robinson, a teaching assistant, took her first year course in 2015 on the South Side. After continuing classes for two years, Robinson was asked to take on her current position in 2017.

Previously a student of the program herself, Robinson said it was difficult as an adult to do something for herself and make time. “For me, it was a place where I found my spot.”

Robinson will be in her second year of the University of Chicago scholarship program this fall and plans to pursue a bachelor’s degree.

Robinson said bringing the Odyssey Project to the West Side is important because residents will have the opportunity to find a whole new community of people in the place they live.

“The program filled a need in my life,” Robinson said. “I wanted to continue school, but I did not have the resources or the time … it was there for me.”

Students in the program study with professors from local universities and can earn six transferable college credits from Bard College.

The program, which is free for all accepted applicants, is made possible through funding from the state and federal government, the National Endowment for the Humanities, the Seabury Foundation, Northwestern University, University of Chicago’s Civic Knowledge Project and the Alice Kaplan Institute for the Humanities.

Funding for the program pays for classrooms, books, snacks and childcare for students’ children when possible. The program also offers transportation assistance if there is demonstrated need.

Petty said although there are specific locations for the classes, all Chicago residents are welcome to apply and attend the one closest to them.

To be considered, applicants must be 18 or older and be income eligible. Applications will be accepted until Aug. 15, and accepted applicants will be announced the last week in August.