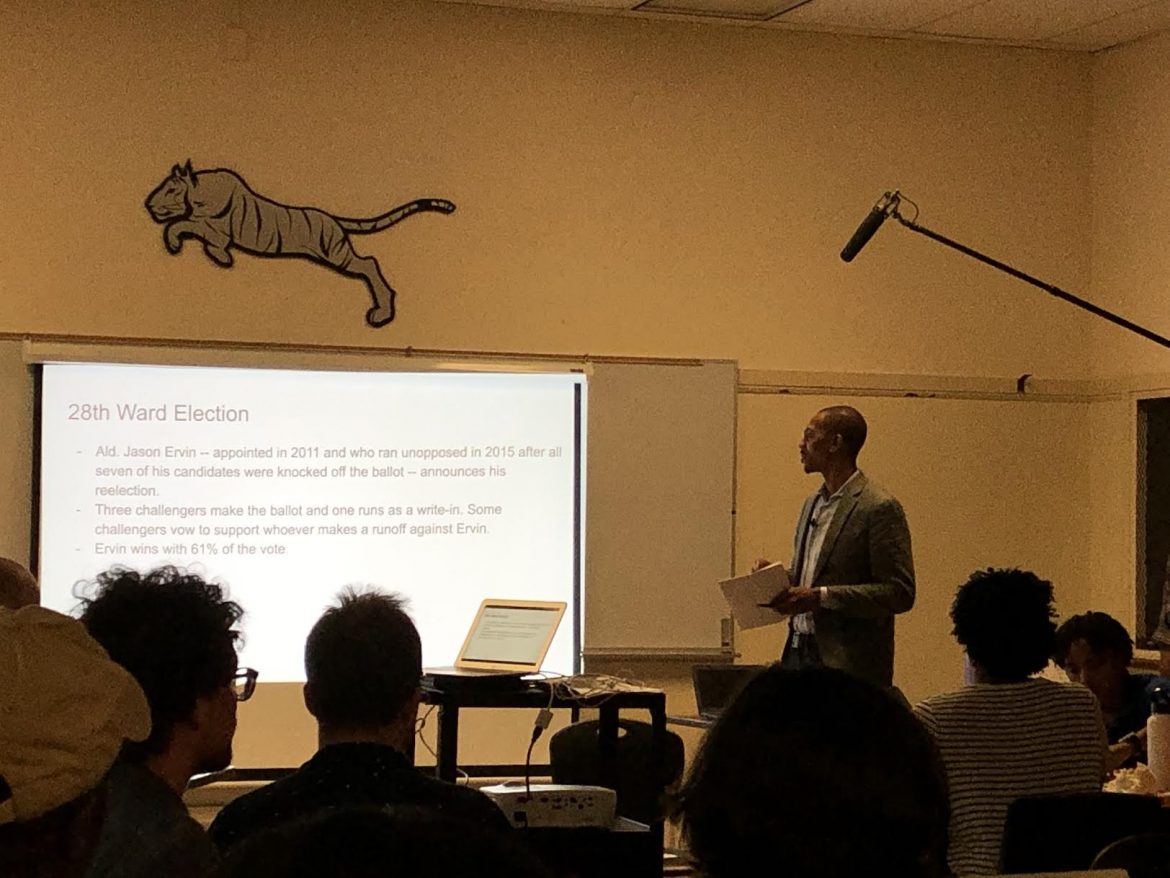 Michael Romain of the Austin Weekly News talks about how the Chicago City Council works.

Lifelong Austin resident Darlene Morgan and her family have lived in the same house for three generations, but now, for the first time in nearly 60 years, her family worries about public safety in their neighborhood due to dim street lighting.

On Morgan’s block, neighbors watch out for each other at night because they can not see anything, she said. And this issue and others have been a growing problem since  Ald.  Jason Ervin (28th) was elected in 2011, she said.

“We have a good community that helps each other,” Morgan said. “Our streets and our people have never experienced problems like these before.”

Morgan, along with her neighbor Venus Finley, voiced their concerns Aug. 15 at Austin College and Career Academy High School where the City Bureau’s Public Newsroom held a workshop on alderperson accountability. It’s one of several the non-profit news outlet is holding across the city to mark the 100 day anniversary since April city council elections.

The workshop also focused on two other West Side alderman: Chris Taliaferro (29th) and Emma Mitts (37th), and how residents in their wards can hold their alderman accountable on issues such as public safety, mental and physical healthcare, affordable housing, street lighting, potholes, blue lights and more.

With two teens attending Austin High School and a member of the local school council, Finley participated in the workshop in the hope of speaking to Ervin in person about her concerns.

Morgan said community members have been calling 311 for a over a year to get the street lights fixed. Although people did initially come out and replace them, she said less than a week later the lights were out again, and no one has been back since to fix them.

Although Ervin did not attend last week’s event, Finley and Morgan said they will be go to the next town hall meetings and try to talk to the alderman about what he is doing. One of Morgan’s main concerns is that although Ervin serves on a number of Chicago City Council committees, including public safety, in a June 11 interview aired on CBS Chicago the alderman initially said it is not his job to deal with street lights, blaming the situation on neighborhood criminals.

“Street light and potholes are an issue of public safety,” Morgan said. “How can you be alderman and a member of the (public safety) committee and say it is not your job?”

The workshop, designed to focus on re-imagining a new and improved South and West Side, helped residents identify their alderman, then discussed how to raise issues of concern with the ward or alderman; they also learned how to check on whether an alderman has done anything regarding those concerns and were advised on how hold their elected officials accountable in the future.

Susan Ellis has been a documenter with City Bureau for over a year, since seeing an ad for a meeting being held at Harold Washington Library. Since then she has attended meetings across the city to help residents take action in their own communities.

“I am extremely interested in community members and hearing their concerns and how they are affected by what is going on,” Ellis said.

Deborah Williams, a lifelong Austin resident and community organizer, said there is still a lot of work to be done on the West Side – and in the Austin community in particular – and that everyone needs to be involved.

Morgan and Finley left the workshop with a plan to speak to other community members and get them involved as well. Both women had not been previously aware of the number of committees and responsibilities Ervin has as an alderman.

“Now we know, and now we can hold him accountable,” Finley said.