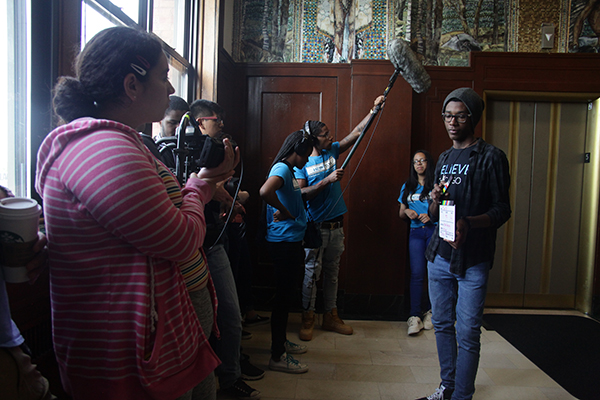 A group of 18 teens from the South and West sides of the city recently crammed together in a small, un-airconditioned room with Tim Kazurinsky for their last day on set.

On the fifth floor of an apartment building in Lakeview, cameras, lights, props and more filled the hallways where Austin resident Angel Saldivar, an incoming senior at ITW David Speer Academy, and other teens got the chance to work with professional filmmakers.

Saldivar said he jumped at the opportunity to work on set after his schools counselor mentioned it to him because of his interest in film and television.

This summer was Saldivar’s third production with Fresh Films. This time around, Saldivar and about 10 other West Side teens spent five days in late June and early July working for Fresh Films, an Illinois-based production company, on the pilot episode for a new show, “Just Jo.”

“It is important to me to have a sense of professionalism,” Saldivar said. “To be on set and working, you have to be very efficient.”

Saldivar said after interning with the program three times now, he has gained experience with a number of tasks including cinematography, audio and craft services. Being given the opportunity to work on a production of this scale is something Saldivar doesn’t take for granted, knowing not many from his neighborhood have the same chance.

“These resources and this type of work is not very easy or accessible for people on the West Side … anyone who gets this opportunity needs to take advantage of it because you never know when another like it will come along,” said Saldivar, who plans to study journalism after high school.

Kazurinsky, an actor and screenwriter best known for his work on Saturday Night Live and the Police Academy films, said when he heard about the program he wanted to audition right away.

“I jump at the chance to work and do things (that are) educational and enable young kids to further their experience,” he said.

During the first read through for the pilot Kazurinsky said he was amazed with how interested the teens were to work on set and get a taste of what it is like to work in film. He said he was glad to see the diversity of the group.

Austin Smith, a North Lawndale resident, joined the program as an 18-year-old intern in training to receive his union card, a card certifying personal membership in a labor union. Smith is part of IATSE Local 476, the largest union representing workers in the entertainment industry, which is how he learned about the opportunity to work with Fresh Films.

Smith said his goal is to work for Cinespace Chicago Film Studios and knew Fresh films would get him there with hands-on experience with grip and camera work.

“To be honest, there are not many chances for people on the West Side,” Smith said. “The public schools … they do not offer the arts.”

Estlin Feigley, director for Fresh Films, said he started the program in 2002 after working with kids in Little Village, where he would give lectures about film. He said he did not receive the response he hoped with the lectures so he created a more interactive experience to teach kids and young adults about film and TV.

“This is a chance for teens to make the professional content they want to … they grow, learn and get in contact with professionals in their field,” Feigley said.

Feigley said he is fortunate to help teens produce content and see them go on to work in the real world with the skills they learned.

“I get to do what I love and share it,” Feigley said.