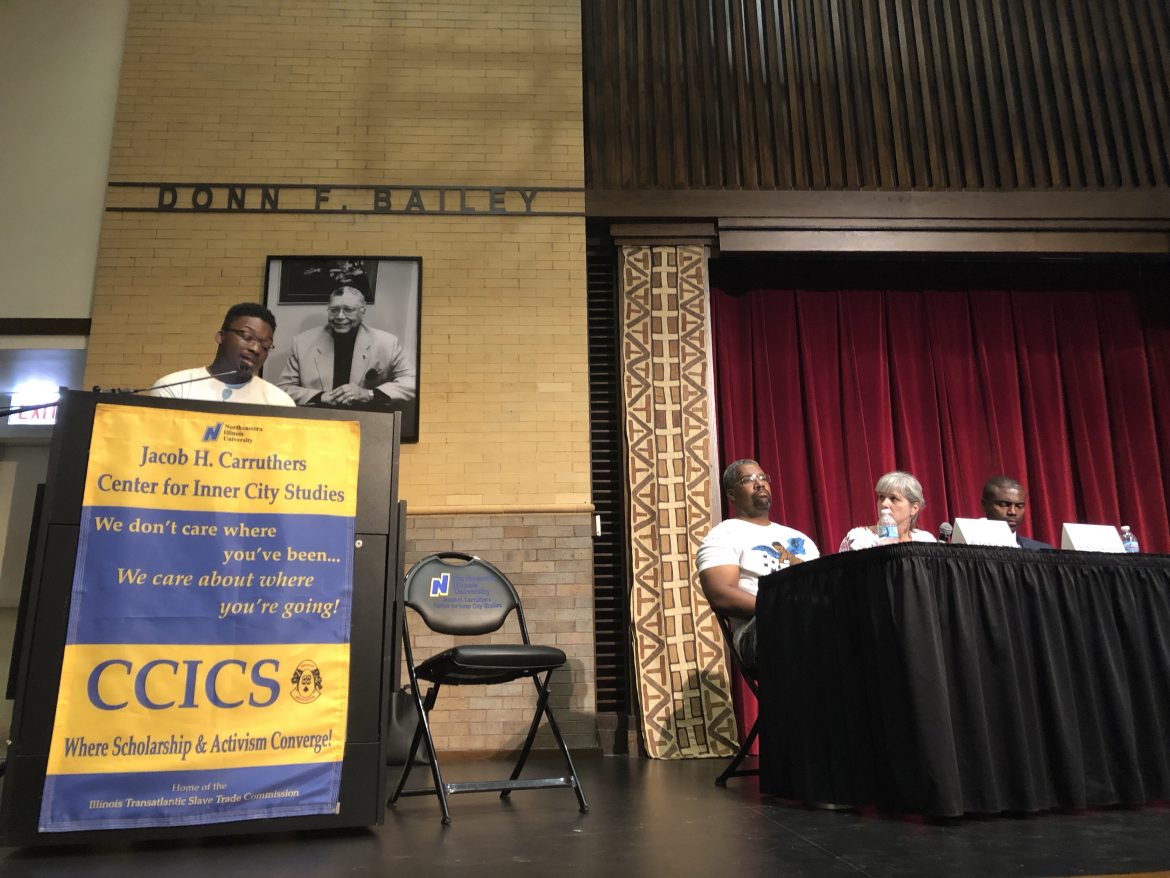 Cannon spent 24 years incarcerated after giving a false confession, which led to his conviction for murder in 1983. Cannon, who entered the prison system with a 6th grade education, went on to educate himself – and to insure his truth would be heard.

At a recent panel discussion, presented by the Alternative Schools Network and held at Northeastern Illinois University in Bronzeville, Cannon said part of the solution to changing the criminal justice system is telling personal stories and educating others.

“I get so mad,” Cannon said. “I want people to know I still feel that today … this cannot be tolerated again. When we are tired of being abused, we are going to stand up and say, ‘no more.’”

Cannon said the key to everything is education. He said young people have the power to make a difference and rid society of systemic injustice.

The July 25th panel discussion was inspired by the recent Netflix miniseries “When They See Us,” which tells the true story of the “Central Park Five,” five young black men wrongfully charged for the assault of a woman in New York City’s Central Park in 1989.

Along with Cannon, the event’s panelists – state Rep. La Shawn K. Ford, Dr. Elena Quintana, Flint Taylor, Amy Campanelli and Yohance Lacour – answered questions about the federal justice system, as well as Illinois’ criminal justice system, and what can be done to make a change.

“Take these issues into account in your everyday life,” said Taylor, a human rights and civil rights attorney. “This is not just something that happened in New York, it also happens here.”

Taylor said by tying together personal experiences and struggles, the country as a whole will be able to move forward and deal with the truth of what the justice system is about, especially when it comes to young people of color. As a lawyer he said it’s his responsibility to bring the people’s narrative to everyone and to put the spotlight on the torture people suffered on the South and West sides of Chicago during the Jon Burge era.

Tyrone F. Muhammad, executive director for Ex-Cons for Community and Social Change, served 20 years in the Illinois Department of Corrections. While in prison he came up with the idea for his organization, which focuses on restoring rehabilitated ex-offenders to useful citizenship.

Campanelli, Cook County’s public defender, represented Muhammad, which led to his release from prison in fall 2017. Muhammad joked he was the one who essentially made her career what it is today.

“It is going to take us to save us,” Muhammad said, reflecting on his mission to help others who have been through experiences like his.

The panel focused on what people can do in Chicago to change the power and role of the police department. Campanelli said the most important thing for people to know when being arrested is their rights.

Ja’mal Green, 23-year-old activist and former Chicago mayoral candidate, moderated the discussion while telling his own story of being wrongfully charged for nine felony counts after a peaceful march in 2016 at the Taste of Chicago. Green said to talk about change in the system, politics must be brought up, and there needs to be a focus on getting people out of office who should not be there.

Rep. Ford, who represents Austin in the Illinois House, said to change society, it’s vital to change laws, and he added being of person of color frequently made him a target of police.

Along with discussion over their personal experiences, the panelists unpacked the issues of trauma, injustice and institutionalized racism seen in the federal justice system. Collectively, the six agreed that educating young people on these issues will push the system in the right direction.

“Young people, you are today, you are tomorrow. Do not give up, and you will always stay on course,” Cannon said.