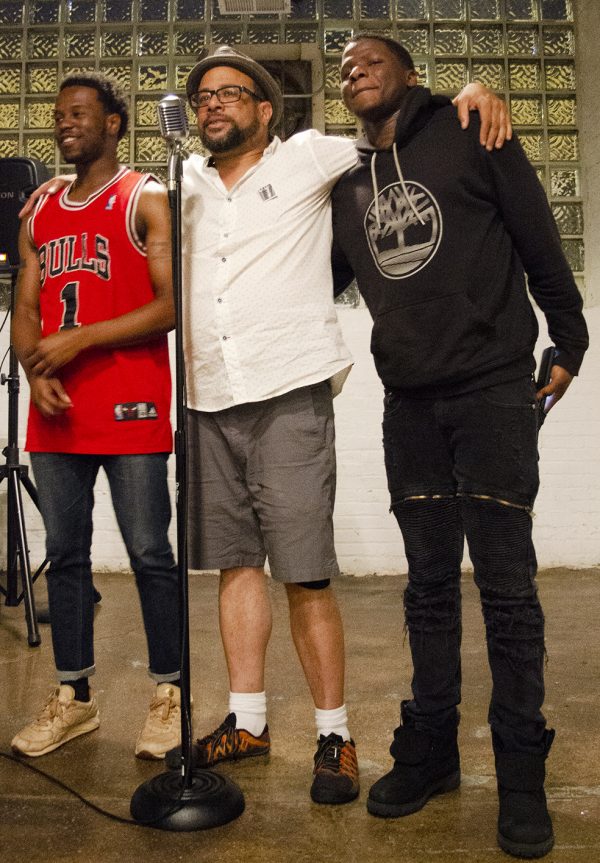 What does the West Side mean to you?

That was the question posed by Resita Cox and Keith Kelley to a group of Chicagoans who gathered recently at The Lab, 3450 W. Lake St.

Cox became inspired to work with Kelley on setting up an open mic event through a documentary film she is working on called “Regrowth.” The film focuses on three Garfield Park residents and entrepreneurs who are working to reclaim space and redevelop the neighborhood through urban farming and community service.

“The idea of doing an open mic (in) conjunction (with) the film was to give the overall community a chance to come out and to have their voices be heard,” Cox said.

The recordings – made June 28 of West Side residents who took to the stage to answer the question “what does the West Side mean to you” – will be used as some of the narration for the film.

For Kelley, who’s with the Spoken Word Academy of Chicago, the open mic was an opportunity to promote the spoken word art form as well as to highlight the cultural significance of the West Side.

Being a “born and bred” resident of Garfield Park, Kelley talked candidly about his relationship with spoken word.“When I was a teenager, I would go to the Conservatory to write because I knew nobody from the neighborhood would be there.”

Among the diverse crowd at The Lab were two young men from Garfield Park and Hyde Park, who sat eagerly waiting for their chance to share their thoughts on the West Side – and compare their perspectives with what they see depicted in the mainstream media. Antonio and Kenneth, who later shared the top prize awarded, both talked about misconceptions they’ve seen in the media and how that depiction impacts the attitudes of those living through them.

For Kenneth, his time on stage was a chance to speak candidly about the hardships of growing up surrounded by gangs and violence. “It’s hard being a black man on the West Side,” he said.

That life, he said, has included losing friends to violence before he turned 19; being in and out of jail; and being shot at multiple times. Kenneth later attributed his success in getting out of the gang life to someone in the audience who gave him an alternative.

“I put down the gun and picked up the camera,” he said.

Antonio, who grew up on the South Side, took the opportunity to explain his view of the West Side before he performed: “We really don’t realize the kings and queens that we are.” Love can seem few and far between, but there is hope, he said. “The West Side is this place that has so much potential. And it’s going to be this potential that is going to be manifested, I know it is.”

Antonio emphasized the importance of the culture on the West Side. This culture, on view last month at The Lab, came in white, black and brown residents who made up the audience.

Off to the side, Austin resident Jamar Wilson worked on a painting for the anticipated winner of the show. “The West Side to me is like a coal mine,” Wilson said. From the outside, it’s viewed as useless, unimportant.

“But given the opportunity to dig deep and get to know some of the residents, there are so many jewels, gems and talents and more worth here.”