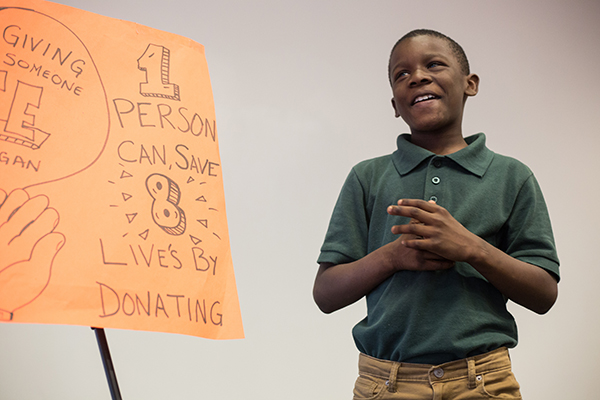 For the past six years, By The Hand Club For Kids, a nonprofit after-school program, dedicated the month of June to celebrate the life of a 2-year-old named Evan who was my brother and died in a tragic auto accident. I never knew Evan in life, but I have been honored to witness his legacy in action.

This year the theme of Evan’s month was organ donation, an inseparable part of Evan’s legacy. At the time of his death, a baby girl named Kara Thio clung to life, desperately needing a liver transplant to survive. Evan’s liver became available at the perfect time.

Over 200 By The Hand kids in 1st through 12th grades spent weeks learning about organ donation through a specially-designed curriculum. They were tasked with teaming up in pairs and creating posters that expressed their new knowledge.

Organ donation was a new concept for the majority of kids.

Bernadette Balinger, a club director, said although initially organ donation was a heavy idea to breach, it was quickly embraced with openness and excitement after the kids learned Evan’s story. They began to embrace the ground-breaking impact that organ donation can be the difference between life and death.

Death is far from a foreign concept for children growing up in Austin. It is woven into their lives and shapes their understanding of the world. Even the youngest children have experienced pain due to the death of loved ones through gang violence or natural causes. Ten-year-old Lavelle lost his mother last Christmas. Balinger said the loss visibly broke him, and he began acting out and getting into trouble. But as soon as the organ donation project started, everything changed.

“For Lavelle to be able to talk about death, changed his entire perception,” Balinger said. His behavior transformed after one simple realization: Life can come from death. It is not an ending.

Lavelle’s bright eyes and neon orange sign stood out to the judges, who named him one of three winners. With a contagious smile, he explained that one person’s organs could save eight different lives. His smile grew bigger as he added that his mom could have saved eight lives, too.

“I’m proud of myself for doing good for Evan,” he said. “I used to cry a lot when my momma passed, but now I only feel good cause I’m helping others.”

One of the other winners, Jorsai, was guarded and shy throughout, but her poster spoke volumes. She had drawn Evan’s face in marker, connected to a thought bubble that reads “I smile because I am still living inside someone else. My life will always be remembered.”

Jorsai has been struggling since her mother died of cancer eight years ago. The project helped her process the grief she had been trapped inside for years and allowed her to talk openly about her mother’s death for the first time.

At the end of the project, the three winners tied blue hearts honoring organ donors onto the branches of a pear tree donated by the Thio family, planted outside of By The Hand Club at 415 N. Laramie Ave. It seemed fitting that the tree was lush and blooming, weeks after Kara, now 27, married the love of her life.

My dad, Greg Samata, Evan’s father, spoke about his son and wiped a tear from his eye. Lavelle Carter beamed as he fixed his winning blue ribbon to his button-up dress shirt he had worn especially for this day.

Kara Thio lives another day with Evan’s liver as her pear tree basks in sunlight.

Hundreds of kids have new-found hope through learning about the miracle of organ donation. I can’t shake the feeling that Evan is not really gone at all. Life goes on.