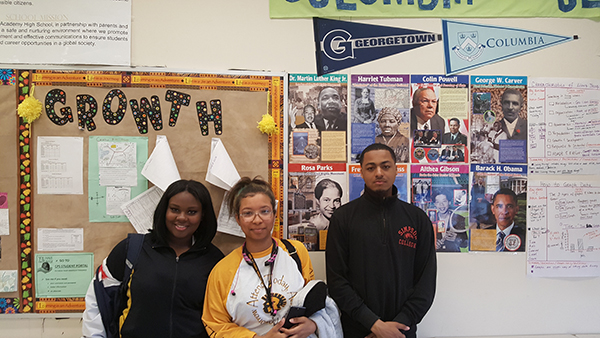 Washington said working as an election judge has helped her be a role model for other kids her age or younger.

“Many people bring kids with them, and I was also seeing a lot of people I knew while working. It gave people the idea that they could do what I am doing, too, the next time an opportunity comes around,” Washington said.

The Mikva Challenge, a non-profit that emphasize youth voice and participation in civic and political life, worked with the Chicago Board of Election Commissioners to recruit and train high school students who served as judges at polling places across the city last week. The student judges – including 12 from Orr – worked at 800 polling sites.

Chicago elections spokesman Jim Allen said the program has grown over the years as officials realized the polling places where student judges worked had fewer problems on Election Day.

Allen said election officials find it beneficial to have younger election judges serve because of their comfort with technology. Pay for working Election Day – which starts at 5 a.m. and ends about 7:30 p.m. – is $200.

Washington, who has worked three elections, said when she first learned of the opportunity she hesitated because she did not like politics. But after hearing about it from several teachers at Orr she decided to give it a try.

“When I first went in November 2018 for the midterm election I saw the importance of it,” Washington said. “I saw how many people actually do not show up to vote,  and I saw the numbers of how many people voted. It proved to me how important it was that I was there.”

As of April 9th, just 11,142 residents of the 29th Ward out of 36,240 registered voters had cast their ballots in the April 2nd runoff. That’s not quite a 31 percent turnout. As election officials continue to count mail-in and provisional ballots, voter turnout citywide is hovering at about 33 percent.

Allen partly attributed the low voter turnout to the fact that people assumed Mayor-elect Lori Lightfoot was going to win.

“There was this expectation among the voters, no matter who they may have supported, that Lightfoot was going to run with it,” Allen said.

He said Chicago leads the nation in terms of using young election judges – hopefully, planting the seed in these young people to be lifelong voters.

“There has been a lot of violence going on in this community,” said Mackey, who has worked the polls twice – last week and in the Feb. 26 election when 14 candidates were vying to be mayor. “This can help people learn that there can be a better change. It needs to be done.”

Stapleton, who has served three times as an election judge, said she has learned a lot, including how to calculate the number of voters who show up and how to use the scanner that records ballots.

She didn’t vote in this election because she did not register early enough, but Stapleton plans to register so she can vote next time.

“It does not matter what [your] background is, or what you do know and do not know. Everyone is still capable regardless of how much they may not like it … it is helpful for the community.”

The three students were recruited by Nhathong An, a diverse learner teacher at Orr who helps coordinate student election judges for Mikva.

An said she got involved after a student in her civics class asked her if she voted in  that year’s election, and An answered no. She didn’t know how. An made it her mission to educate herself so she could educate others.

“I went ahead and made sure that everyone at least had exposure to the opportunity,” An said. “The three students I chose did not have a lot of knowledge about what was going on, but with trust in me, they took the risk and tried.”