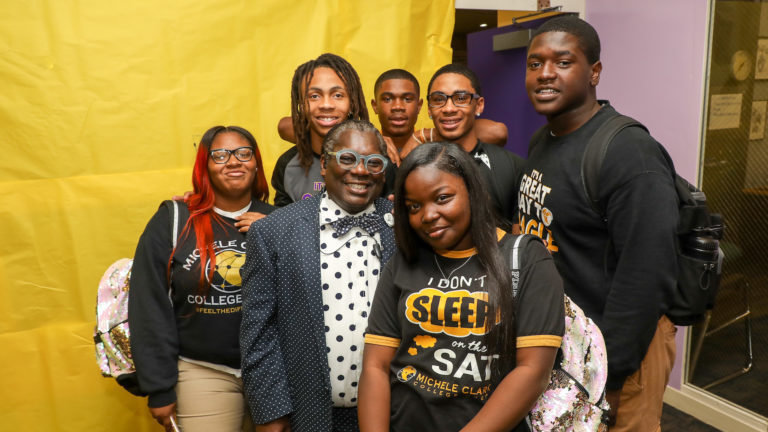 Michele Clark Academic Prep Magnet High School has been selected to advance in a process that may lead to it becoming the first high school in Austin with an International Baccalaureate program.

The school submitted an online petition to Chicago Public Schools along with letters of interest from community stakeholders to bid for an IB program being offered through a CPS Request for Proposal. Michele Clark and other selected schools were informed Dec. 3 they would continue in the RFP process.

With school enrollment dropping in Austin, a high school IB program may be a draw for some students considering schools in other neighborhoods.

Michele Clark Principal Charles Anderson Jr. said many students who attended elementary school in Austin leave the community for high schools that offer the IB program, especially if they were already enrolled in the program.

“We want to be able to tell students that we have the program right here in the community and you don’t have to leave to get that,” Anderson said. “If Michele Clark is awarded this program, this would just be another feather in CPS’ cap as to all the great things that are going on in the district.”

Only a week after the petition was created, it exceeded its original goal of 1,000 signatures and is now aiming for 1,500. Support for the petition and the application for the RFP came from Austin Coming Together, Kids First Chicago and other community organizations and leaders.

“This is one of those things that you hope the community gets involved with, and I’m just elated that they did,” Anderson said.

The bid comes not longer after the release of the 2017 annual regional analysis, a CPS report documenting school enrollment, quality, student demographics and program offerings. The analysis indicated that none of Austin’s high schools have either an IB program nor a fine and performing arts option. Twenty-three other public high schools currently have the IB program, according to CPS.

Jose Abonce, ACT’s community project organizer, said while the analysis provided information to a broader audience than just the West Side, the need for an IB program in the area has been discussed in earlier forums such as conversations held during the formation of Austin’s quality of life plan. (The plan is being officially unveiled 10 a.m. at Michele Clark, 5101 W. Harrison St.)

Abonce said the program may help reduce the dropping enrollment in West Side schools because it would allow elementary school students in the IB program the opportunity to continue at a local high school. The regional analysis stated West Side enrollment has dropped by 5,100 students, or 14 percent, since the 2014-2015 school year. Currently there are 28,841 more seats than students in the West Side.

“The lack of an IB program in high school is yet another factor of why maybe some eighth graders would leave the Austin community to go to high school, especially if they are coming from IB programs,” Abonce said.

Dwayne Truss, an education working group member on the Austin quality of life plan and candidate for 29th Ward alderman, said securing quality academic programs for Austin schools would help correct educational disparities between Chicago neighborhoods. Having an IB program in Austin would help make Austin an educational destination, potentially bringing in students from outside of the community, he added.

“[The programs] send the message that we as the Austin community are taking the initiative to address issues and let families know that this community is a destination, not an escape,” Truss said.

Michele Clark will be notified of its application status March 1 after a series of school visits and interview from CPS.