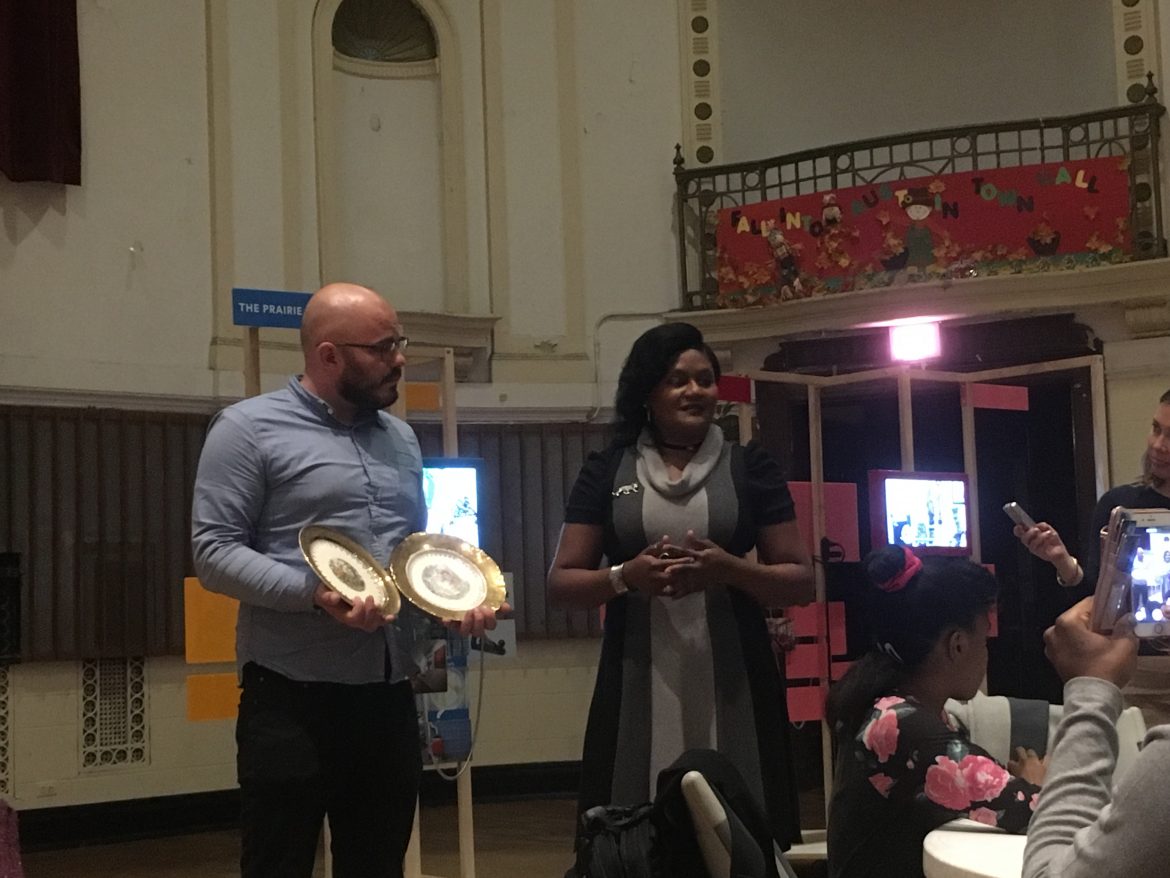 Elliot Heilman, program manager for public policy at Illinois Humanities, and Yolanda Anderson, the co-owner of the "pink house" in Austin, show off the gold-trimmed plates Anderson brought to the Everyone’s A Designer/Everyones Design exhibit.

On the corner of Central Avenue and Ohio Street, the hot pink and white Victorian house sticks out from the other surrounding brick houses, capturing the vibrance of Austin on a single lot.

The pink house and its co-owner, Yolanda Anderson, were profiled for the Everyone’s A Designer/Everyone’s Design exhibition, which recently made a stop in Austin.

West Side residents gathered earlier this month at Austin Town Hall, 5610 W. Lake St., to share significant objects from their own homes. The exhibit, produced by Illinois Humanities, profiles houses and their owners in lesser-known areas of Chicago.

“I think we really try and come in and help expand the kind of coverage in art and design in Chicago,” said Elliot Heilman, program manager for public policy at Illinois Humanities. “[We] try and get something that’s truly Chicago as a whole city.”

The exhibition, which has also featured houses and traveled to other parts of the metro area, is next at the Tuley Park Cultural Center, 501 E. 90th Place. By Dec. 8, the exhibit will make its way to the Chicago Cultural Center, 78 E. Washington St.

Austin residents were invited to bring objects important to their household and share the story behind them. A photo of the object and its story then are added to the exhibit.

“Over time the exhibition grows, there’s a component of the physical space with the drawings and descriptions of the objects added,” said Alice Kovacik, the program assistant for the exhibition. “When we reach the Chicago Cultural Center at the end of the exhibition, it will look very different than when we started in Calumet Park.”

Anderson attended the program, bringing two China plates with gold trimming and Victorian-styled portraits in the center. Hung on the walls near her dining room table, she said they celebrate the connection between family members.

“We forget about the realm where families cook, eat and talk together,” Anderson said. “The imagery on plates is people out there in nature, talking to each other — they’re getting to know each other organically.”

Another Austin resident, Diondai Brown-Whitfield, brought an Austin High School yearbook from 1965. She has been researching Austin the past 30 years and hopes to write a book on her findings.

“I found through the yearbooks a lot about the history of not just the Austin community, but life, the city of Chicago and the state of Illinois,” Brown-Whitfield said.