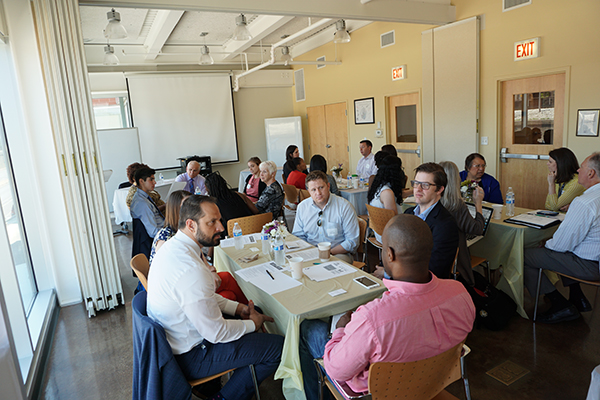 Bob Urso’s nephew got mixed up with drugs several years ago. “He was a lost soul, in and out of treatment centers,” says Urso, president and CEO of PCC Community Wellness Center.

But when Urso’s nephew became a dad, he “really turned his life around.” About to become a father for the second time, he’s still clean, no longer manipulating his parents and grandparents, living a productive life.

Christie M. Hahn’s family has also been affected by the opioid crisis. “My cousin sounds like your nephew,” Hahn says.

But her cousin’s story turned out very differently: It ended 25 years ago on the streets of Florida with his death from a heroin overdose, says Hahn, who works for Aetna Better Health and serves on the leadership council of The Kennedy Forum Illinois, a mental health organization.

Hahn and Urso shared their stories earlier this month at the PCC Austin Family Health Center, where health providers and others gathered to discuss how the opioid crisis is affecting them, their employers and the West Side.

Angie Kauffmann, clinical program manger at Thrive Counseling Center in Oak Park,  says it’s now common to see people addicted to opioids go from one hospital to the next – “hospital hopping,” as opposed to bar hopping – to maintain steady access to drugs.

Marta Alvarado, director of community wellness programs at Westlake Hospital in Melrose Park, says she and her colleagues have grown used to seeing patients they call “frequent fliers.”

Kauffmann says hospitals aren’t necessarily checking with each other to catch these “frequent fliers.” And some medical staff feel bad for these patients because they seem to be in so much pain that it’s hard to refuse a prescription.

A typical case: A doctor gives an elderly patient medication for back pain or arthritis, then they become addicted. They present differently than younger addicts, and they often don’t think they’re addicted because a physician gave them the drugs. “But it’s still addiction,” she says.

Opioid-related overdoses kill more people in Cook County than car crashes or gun violence, according to the sheriff’s office. In 2017, there were 999 opioid overdose deaths, up 83 percent from 2015, according to state public health department data. At the Cook County Jail, roughly one in five detainees admits to opioid abuse, and hundreds receive treatment every day.

Michael Rudolph, business development manager at Riveredge Hospital in Forest Park, says the years-long problem of I-290 being a “heroin highway” has not abated. An Elmhurst resident, Rudolph says kids from his local high school continue to travel to Austin to buy drugs in Austin. But now the pattern has reversed: people from Austin are going to the suburbs, “taking the product to the consumer.”

Rudolph knows firsthand the easy access many have to legally prescribed opioids.

About a year ago he broke three ribs, and within a week he had four narcotics prescriptions, including one he was given at the hospital when X-rays were taken and another later given by his primary doctor. Not long after that, Rudolph’s wife had her own medical issue, but she was given a prescription that limited how many pain killers she could receive; that’s because her insurance company was managing it, not the medical community, he says.

Urso’s wife had a similar experience. When she broke her foot she was prescribed opioids, but not once did someone tell her what the side effects would be or offer her alternatives, Urso says. His wife, a nurse, ended up taking 2 of the 30 pills she was prescribed. Were the health providers on auto pilot? Was it the drug companies? Urso wonders.

One solution is better training of medical staff to detect patients with an opioid addiction, especially those who may not on the surface appear to have a problem, Alvarado says. Medical staff need to be aware of  their own bias that allows them to overlook some addicts, like a well-dressed white woman, she says.

There’s also great need for people with addictions to be treated on an out-patient basis, not just as in-patients, Alvarado says. And there continues to be a shortage of psychiatrists, especially those who specialize in treating young children and adolescents, Rudolph points out.

And everyone – whether they’re a health provider or not – needs to understand the power of addiction.

Rudolph remembers a patient who came to Riveredge and flat lined, but the medical staff was able to revive her. The woman returned the next day and flat lined again. On the third day she was out using drugs – despite nearly dying twice.

“That’s how powerful addiction is.”