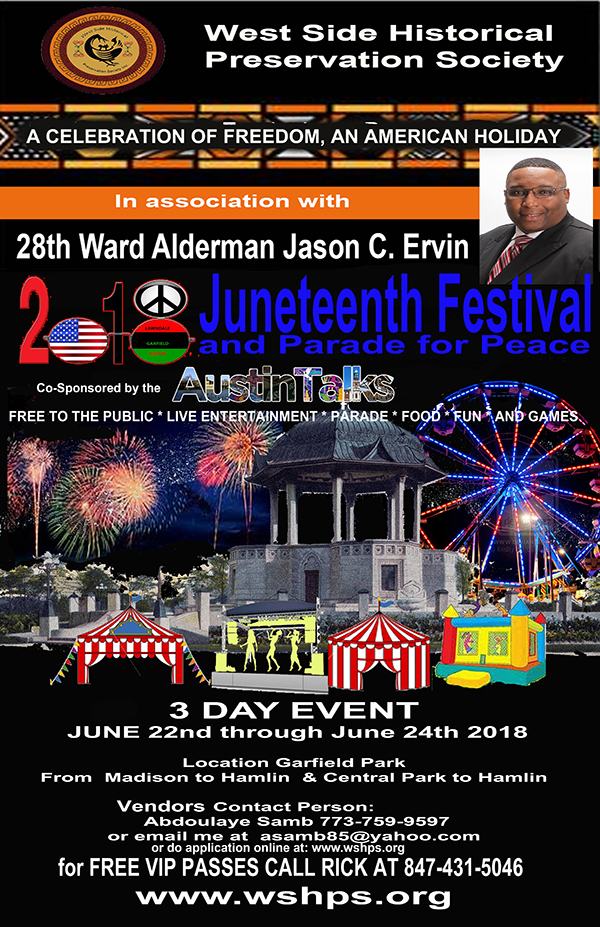 Rickie Brown, CEO and founder of the West Side Historical Preservation Society (WSHPS), has been fighting to raise awareness for Juneteenth since he first saw it celebrated in Chicago in 1995.

“I didn’t know anything about Juneteenth,” Brown said. “I happened to see something I hadn’t seen in a long time, and it was a red, black and green flag … over in Garfield Park.”

The red, black and green flag is the Pan-African flag, designed by Marcus Garvey in 1920 to represent the freedom and pride of African-descended people everywhere.

The June 19th holiday marks the liberation of the last African-American slaves in the United States in 1865, two and a half years after Abraham Lincoln signed the Emancipation Proclamation in Galveston, Texas. It has since become an independence day for African Americans around the country.

The 1995 celebration, though small, filled Brown with pride that he hopes to spread to other West Side residents. He’s been regularly holding annual Juneteenth celebrations since.

On Tuesday (June 19th), Brown, with the WSHPS and Ald. Jason Erven, will be holding a tribute to both veterans and victims of gun violence in Chicago at the Golden Dome Field House on Central Park Avenue to commemorate the holiday.

Red, black and green balloons will be released at the celebration to commemorate victims of violence. Participants will include 28th Ward Ald. Erven and representatives from various branches of the military, including a color guard.

“These are the same folks that have made the supreme sacrifice, and fought for our freedom as African Americans and Americans period,” Brown said. “We want everyone to come out and celebrate Juneteenth with us.”

Aurora artist Gregory Zanis will also be attending, bringing new work from his “Crosses For Losses” project. Zanis has been displaying handmade white wooden crosses across the country at sites plagued by violence – and in places where he wants his message for peace heard. Recently, his work was displayed in Parkland, Florida, and Washington, D.C., among other cities.

This year, Brown received a signed proclamation from Mayor Emanuel endorsing the celebration. And Gov. Rauner has declared June 19, 2018, a statewide holiday.

More celebrations will be held the following weekend in Garfield Park June 22nd, 23rd and 24th.

There will be a carnival, a peace parade sponsored by state Rep. Melissa Conyears-Ervin, a talent show, displays from the DuSable Museum of African American History and more.

“When you haven an event – when you have food and entertainment and a carnival type atmosphere – it brings out people in the masses, and you have a captive audience,” Brown said. “We want people to come back with a sense of dignity and pride in their community, and also in themselves.”

“If it can just be three days of camaraderie and peace for our community, then so be it.”

The memorial on Tuesday begins at 11:30 a.m. at the Golden Dome Fieldhouse in Garfield Park, 100 N. Central Park Ave. The celebration continues on Friday, Saturday and Sunday (June 22-24).