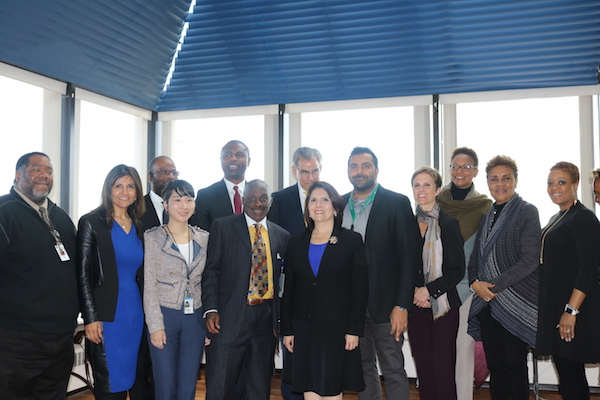 Pointing out the window of the sixth floor of Loretto Hospital, state Rep. La Shawn Ford expressed what others in the Austin neighborhood, hit hard by the opioid crisis, also wanted to make clear: “We’re here on the West Side today because we don’t want you to forget us.”

Ford was joined last Wednesday by Lt. Gov Evelyn Sanguinetti and members of Ford’s West Side Heroin Task Force. The event – held on the 50th anniversary of Dr. Martin Luther King Jr.’s assassination –  offered members of the task force, a diverse array of legislative and medical professionals, a chance to address the state of the opioid epidemic and outline plans to fight it.

Also present were residents from A Safe Haven, a residential treatment center for recovering addicts located on the West Side, who hope to see an increase in the number of long-term treatment programs like theirs.

Between 2014 and 2017, the number of annual opioid overdoses on the West Side have tripled from 600 to 1,900. Across the rest of Illinois, that number has doubled.

“Everyone has been impacted by this epidemic, and everybody needs to pitch in and help,” said Amanda Kim, head of strategic health initiatives at the Illinois Department of Public Health.

“But there are trends in how this epidemic is developing, and data is confirming what everyone in this room already knows – that the West Side of Chicago has been getting hit especially hard.”

Ford spearheaded the creation of the West Side Heroin Task Force in 2016 to address this inequality and to determine the best course of action for alleviating the opioid crisis. The task force includes staff from Loretto Hospital and Roosevelt University, drug policy experts, former users, physicians and advocates.

“What you guys are doing now is just so needed because the changes that we’ve seen taking place,” said Raymond Law, marketing outreach coordinator for Soft Landing Recovery. “This is what needs to happen. In the past there were no task forces … There was none of the things we see today happening back then.”

Loretto is the only hospital on the West Side to offer comprehensive addiction treatment including inpatient, aftercare and Suboxone treatments.

Jocelyn Wells, who has specialized in treating addiction at Loretto since 2010, said her patients “look forward to coming here because they know the staff here. They have a relationship with us … When people are homeless and helpless, they know where to come.”

Other speakers highlighted the numerous ways the opioid epidemic has affected the West Side.

Walker said she attributes an uptick of children being admitted into the care of DCFS to the growing opioid crisis: “I am asking all of us to come together and work together to do what we can to affect this crisis and to stop me from being the default system.”

The event was held on April 4 to underscore the social root of the opioid crisis. Eighty-three percent of Chicago’s opioid hospitalizations occur on the West Side, and the African-American community is disproportionately affected.

“There is hope at the end of the line,” Sanguinetti said. “And that is why our governor is working so hard to slowly move the needle every day so that we can make steps. So that we can have that conversation in the future about ‘do you remember the opioid epidemic?’ as something of the past.”

That action came after the first-term governor received flak for vetoing a 2015 bill known as the Heroin Crisis Bill, which was sponsored by Ford. The Illinois House overrode the veto.