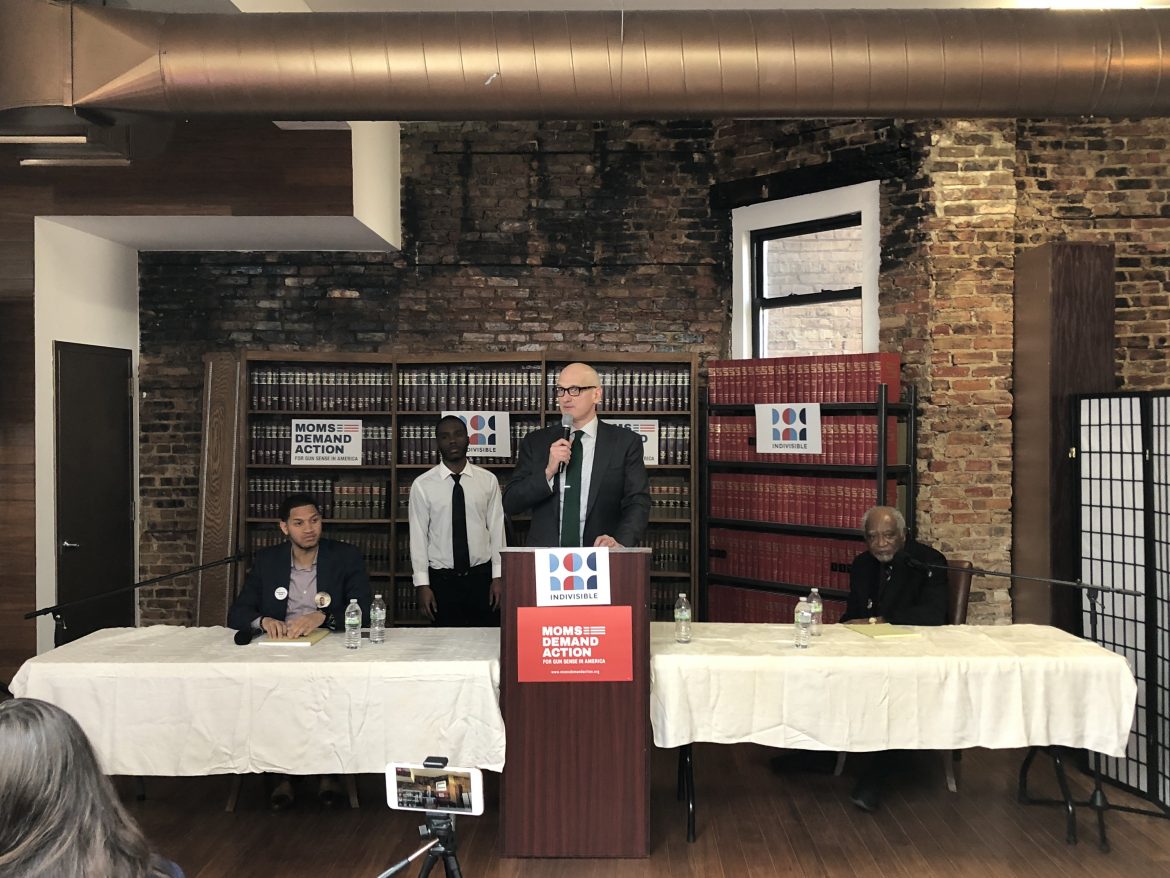 The two-hour forum held Saturday at the Westside Justice Center, 601 S. California Ave., attracted about 40 people and was moderated by Tom Moss, host of the Chicago podcast Indivisible.

Both candidates had the chance to discuss the pressing topic – one on the minds of students across the country after last month’s shooting in Florida that killed 17 people, most of them teenagers.

CNN reported that tens of thousands of students participated in a national “walk out” last Wednesday, exactly a month after the Marjory Stoneman Douglas High School shooting.

“I commend the young people who took off school for 17 minutes the other day to convince legislators that something more impactful has to be done to limit access to the weapons that people can get that they never should have,” Davis said.

She also asked both candidates to explain what they would do if they could allocate the money instead to the 7th District. Odessey said she thought Clark answered her question more directly.

Clark, a teacher at Oak Park River Forest High School, said he did not support funding of the training academy, and he would invest the money in researching and implementing urban agriculture in the community.

Davis said he supports the training academy but would prefer the money be used to pay not-for-profits to provide after-school activities for young people to be safely engaged in the community.

Another student representative from Global Majority Rising, 19-year-old Devon Temple, asked the candidates to give their opinions on Gov. Bruce Rauner’s recent veto of a gun store licensing legislation.

Temple said both candidates answered his question “half-way” and was hoping they would have an action plan for gun shop regulation.

The candidates also were asked to elaborate on their experiences with gun violence and how that has helped them approach the topic.

Davis said when he was a CPS teacher, six of his students were killed and five or six committed gun violence.

Clark briefly mentioned a personal experience he had with guns back in 2007 as he was about to be deployed overseas; later after the forum Clark explained that he was grazed with a bullet by gang members who were targeting people in the military.

He, too, has known students affected by gun violence, both while teaching in Austin and also at OPRF.

During his nine years as an educator, Clark said 11 of his students have been lost to gun violence, including OPRF senior Elijah Sims, who was shot to death in Austin a day before his 17th birthday, according to the Chicago Sun-Times.

The candidates also were queried about President Trump’s idea of arming teachers.

Davis responded: “If I had my way, the only individuals who could have access to an automatic or semiautomatic weapon would be the military. I’m not even sure if I want law enforcement to be armed.”

Clark’s response: “I have PTSD, and it’s tragic that when I look in the students’ eyes I see the same symptom.”

The forum was hosted in partnership with Moms Demand Action for Gun Sense in America, which was started in response to the Sandy Hook school shooting in December 2012.

Craig Cameron and Jeffrey Leaf are the Republicans seeking that their party’s 7th District nomination; the winner of that race will face the winning Democrat this fall in the general election.

Early voting for the 2018 primary ends Monday; polls will be open from 6 a.m. to 7 p.m. Tuesday. For more information, visit the Chicago Board of Election Commissioners.