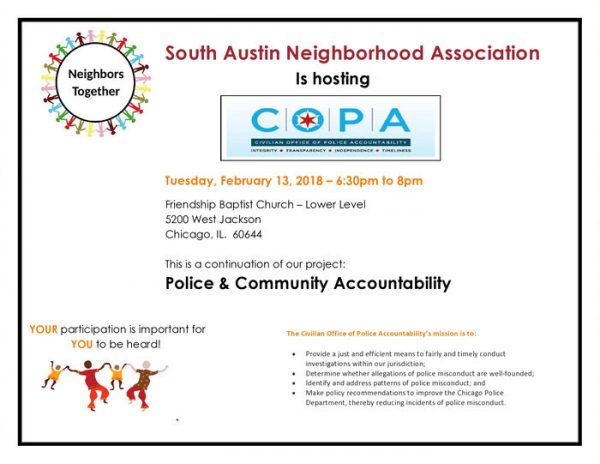 Several COPA staff members were present at the Feb. 6th community meeting, one of many the office is holding across the city but especially in West and South Side neighborhoods where, COPA staff noted, there are many interactions between residents and police.

“Anyone at any time can have an interaction with a police officer,” said Ephraim Eaddy, COPA’s director of community outreach and engagement. And COPA wants residents to have the knowledge they need to deal with officers.

Based on the number of complaints COPA received from West Side police districts in its first year of operation, the data “told us Austin was the place where we had to be,” Eaddy said.

That’s partly because of the history of the Independent Police Review Authority (IPRA), the agency that preceded COPA, Kersten said. During much of IPRA’s existence – it was created by then-Mayor Richard M. Daley after the fallout of former Commander Jon Burge – the office rarely ruled against police.

“It makes it really hard to get the complete picture” when witnesses are reluctant to come forward,” Kersten said. “We are really going the extra step to make ourselves available to people who may have relevant information for us.”

A complaint – which is supposed to be resolved within six months – can be closed by COPA by being categorized in one of these ways:

With each investigation, COPA is “tasked with giving every one an even playing field” – not favoring the officer or the civilian, Kersten said.

The office has 125 employees; fully staffed it would have 140. Is that enough? asked one audience member.

Another audience member wondered if it’s legal for a police officer to order someone to unlock their phone and for an officer to search it. No, there must be a search warrant.

What happens if an officer wants to file a complaint against another officer? At a certain level, Chicago Police Department employees are required to report misconduct to COPA, so there are complaints coming from CPD.

Toward the end of Tuesday’s meeting, Ernesto Cato III, the 15th District’s police commander, walked to the front of the room and said, “I do appreciate the work that COPA is doing. . . . The No. 1 thing is just doing what’s right and getting to the truth.”

Rev. Epting ended the meeting by encouraging West Side residents to reserve judgment while a case is being investigated.

“Whenever you see something on the news, try not to make your judgment right away. Please let the investigative process take its course,” Epting said, adding, “I’m praying for our commander every day. We have a lot of work to do.”

COPA will be back in Austin Feb. 13 from 6:30 to 8 p.m. The South Austin Neighborhood Association is hosting the event – at Friendship Baptist Church, 5200 W. Jackson Blvd. – as part of its police and community accountability project.