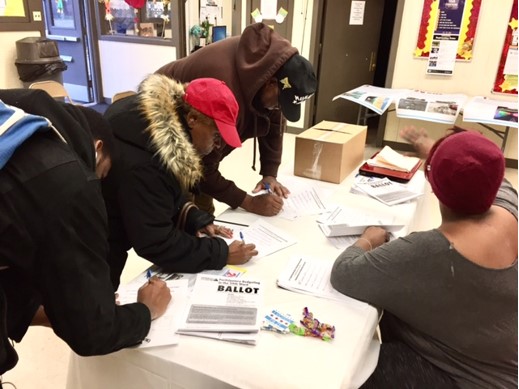 Voting has begun in the 29th Ward on which community projects will be funded in 2018 out of Ald. Chris Taliaferro’s annual “menu money” budget.

The alderman is hosting five expos across the ward, where residents at least 14 years old can cast up to three votes on five neighborhood projects being considered for funding. Residents can also vote at the alderman’s ward office at 6272 W. North Ave.

Five “most viable” projects made it on the ballot this year, Taliaferro told AustinTalks, noting he did not take part in the selection process.

“Our [participatory budgeting] committee handled all of the intake of ideas,” he said. “We are trying to get the community involved in the entire process.”

This is the second year the first-term alderman has used “participatory budgeting” to spend some of the $1.3 million “menu money” earmarked for ward infrastructure.

Ald. Joe Moore(49th) was the first alderman several years ago to use participatory budgeting, and since then, nine other aldermen across the city have joined in. In the rest of the wards, it’s up to the alderman on how the annual menu money is spent.

Taliaferro said he did not launch the process when he first took office in 2015 due to urgent infrastructure needs on Chicago’s West Side.

But last year he set aside $700,000 for participatory budgeting, something he promised to do during his campaign against then-incumbent Ald Deborah Graham.

Last year, the money was used to fund eight community projects, including murals and community gardens; about 80 residents participated in the vote.

This year, community representatives narrowed the list of projects to five based on 67 ideas received from residents from July to September, according to the alderman’s office.

The five projects will cost about $612,500, said Austin resident Terry Redmond, a member of the South Austin Neighborhood Association who’s in charge of the ward’s participatory budgeting process.

The five projects to be voted on would:

More information regarding the projects, including how and why they came about, will be on display at the alderman’s office through Nov. 20th, the last day residents can vote.

Residents will also have a say on how the remainder of the $1.3 million menu will be spent on street and alley resurfacing, Redmond said.

“The entire $1 million dollars is all open,” Taliaferro said last weekend before voting began. “And a certain percentage of that will remain for infrastructural repairs, such as streets and alleyways, sidewalk repairs.”

A federal subsidy will bring down the cost for the first five blocks of resurfaced streets in each ward to $43,500 per block, according to the alderman’s office. The average cost for each additional street resurfaced will be $72,000.

Specific streets to be repaved will be determined by a number of factors, including residents’ proposals and information from the Chicago Department of Transportation.

It has not been determined how many of the five neighborhood projects residents are voting on will appear on the final list, Redmond said. That will depend on how much of the $1.3 million people want to be allocated to streets.

“This is new,” she said, so the alderman’s office and her team have been working to spread the word over the past months. “That will determine how successful this participatory budgeting cycle is.”

“A lot of people are having a hard time grasping what it’s about,” she said.

Other expos will be held:

Some of the proposals that did not make this year’s ballot will be carried over to the participatory budgeting process in 2019, Redmond said. That includes building small book libraries like those in Oak Park and River Forest, she said.

“I think it’s a good opportunity to get (young people ) involved in the voting process actually before they are able to vote in the state, city, county and federal elections,” he said.

“It gives them an idea of seeing democracy, seeing the projects they’ve been interested in and supporting, and going out to support it by voting,” he said.

She said they are considering getting students from Douglass and Michele Clark High School involved in designing some of the neighborhood projects once the results are in.

The alderman’s office will announce the results a few days after voting ends, said Chris Abbasi, a staffer with Taliaferro’s office.

Approved projects will go to City Hall for approval once the menu money becomes available in January, Abbasi said. 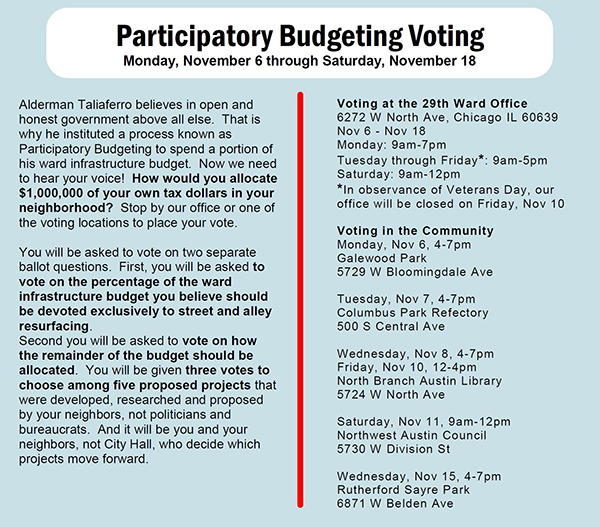