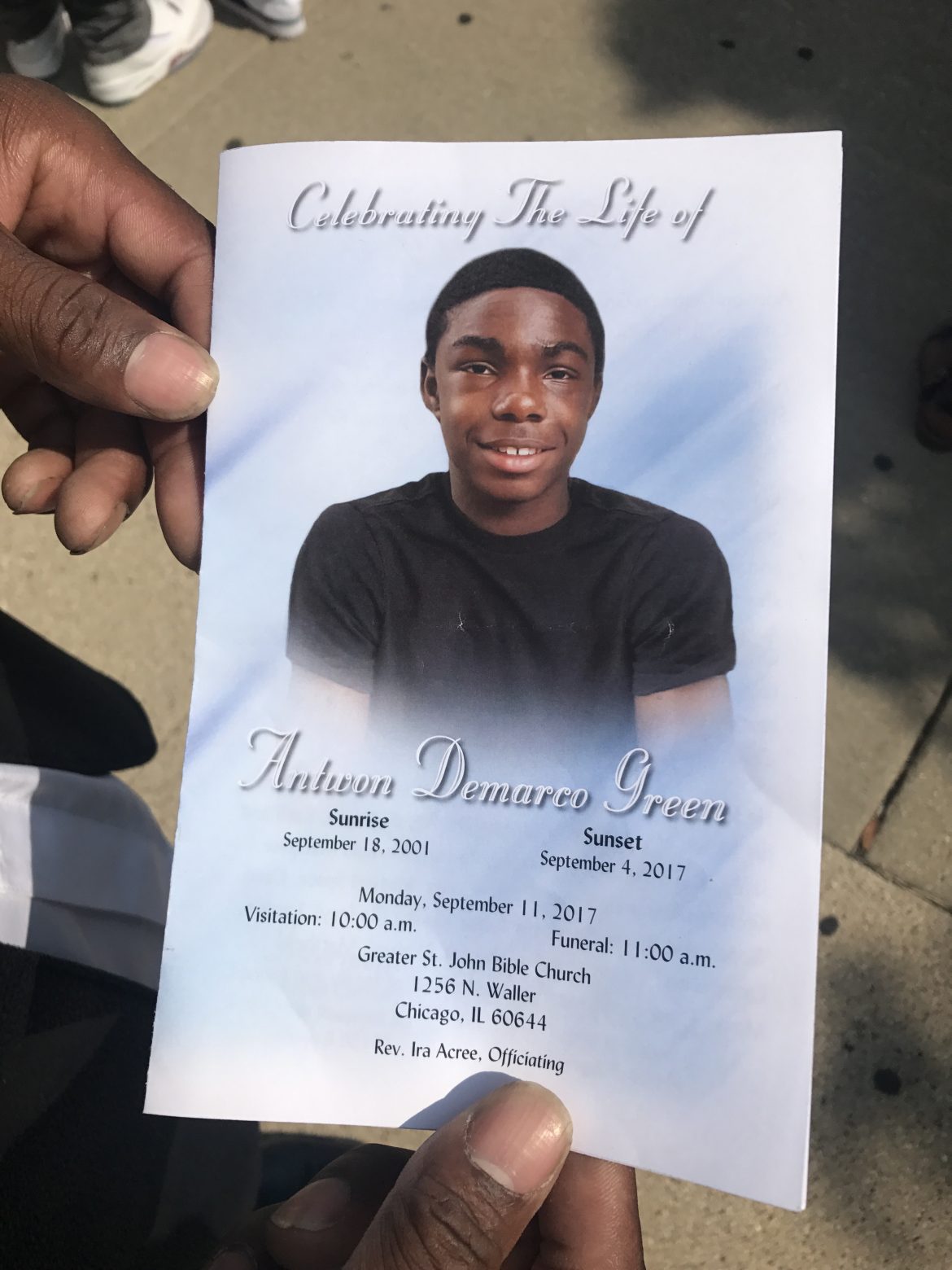 As hard as Michael Jones and Genneva Green tried to keep their 15-year-old son Antwon Green away from violence, his life was cut short in front of his grandmother’s West Side home Labor Day night.

“It’s a real shock that something happened to him,” said Jones, 40, “because we keep him so close to us.”

Antwon, who was visiting his grandmother in North Lawndale with other family, was shot in the back during an argument involving a group of young men, a few steps from his grandmother’s house at the corner of West 15th Street and South Drake Avenue, his father said.

He was pronounced dead at Stroger Hospital, about 30 minutes after the incident happened.

Antwon’s funeral was held Monday at Greater St. John Bible Church, where he was baptized at an early age by Rev. Ira Acree, the church’s pastor, and had since attended services with his family.

“We want the family to know that this church, we stand with you,” Acree said before he delivered a prayer at Monday’s service.

About 150 families, friends and community members bid farewell to the 15-year-old, who lived in the Pullman area with his parents, brothers and sisters, and studied at Corliss High School.

“I really don’t know what to do,” Jones said as he struggled to hold back tears during his son’s funeral. “I did the best I could.”

It took several pauses before he could continue his speech.

“He had dealt with pain and suffered in this murder,” he said, as the crowd started to pray. “But at least he’s got peace now. He’s gonna be dearly missed by me and many more.”

Others spoke at Monday’s service.

“My heart is grieving at the moment because I see so many times at so many places these kids are losing their lives,” said Levita Watkins, 36, who lives two blocks from where Antwon was fatally shot.

Although she didn’t know the family before, she wanted to show support as a parent and part of the community, Watkins told those gathered Monday morning in Austin.

“You have our prayers,” she said “Because it could have been anyone of our children . . . You are not at this alone.”

No arrest had been made in Antwon’s killing, Chicago Police officer Christine Calace said Thursday.

“Everything is still open,” she said. “There’s no suspect so far.”

The families are trying to get more details regarding the shooting, Jones said, adding he hasn’t yet seen the police report. They have put up a $2,000 reward for clues that lead to the arrest and conviction of the perpetrator.

“He didn’t run with a street gang or anything like that,” Jones said in an interview later. “We didn’t allow it. We did let him come out , but it has to be where we can see him. So he can go a little up and down the block every day.”

Antwon did what his mother told him the night he was killed, going a bit down the street without leaving the block, Jones said.

“We say, ‘don’t go up the block,’” he said. “It was just that it happened on the block that he’s supposed to be on, not like three blocks away.”

That’s when he was approached by some men and got involved in an argument, Jones said.

“Somebody said something unfaithful, and the boy that shot him didn’t like what was being said,” Jones said, adding it’s not clear whether Antwon was the intended target.

“But they say he got shot while he was on his way getting away,” Jones said.

Monday’s funeral ended with families and friends lining up to the front of the church hall, where Antwon’s body lay surrounded by bunches of white flowers. The coffin was later escorted to Oakridge Cemetery.

“He was a good kid, somebody who passed away too soon,” Jones said.

“He really liked basketball,” he said, adding he was on a basketball team before he died. “He was a very motivated person.”

The Labor Day weekend saw seven fatal shootings across Chicago, with 35 others wounded, according to the Chicago Sun-Times, with most happening on the city’s South and West sides.

“It’s so frustrating seeing these young people being gunned down on the streets of Chicago,” Acree said in an interview later.

“The senseless genocide is troubling and rather scary,” he said, adding there are too many “premature funerals” that he has had to officiate.

The community must bind together and begin to police itself, he said.

“The people must rise up and say enough is enough.”

“I don’t want it to happen to any more of my children or to anyone else’s children.”

Antwon had five brothers and sisters.

“I just wish it would stop.”