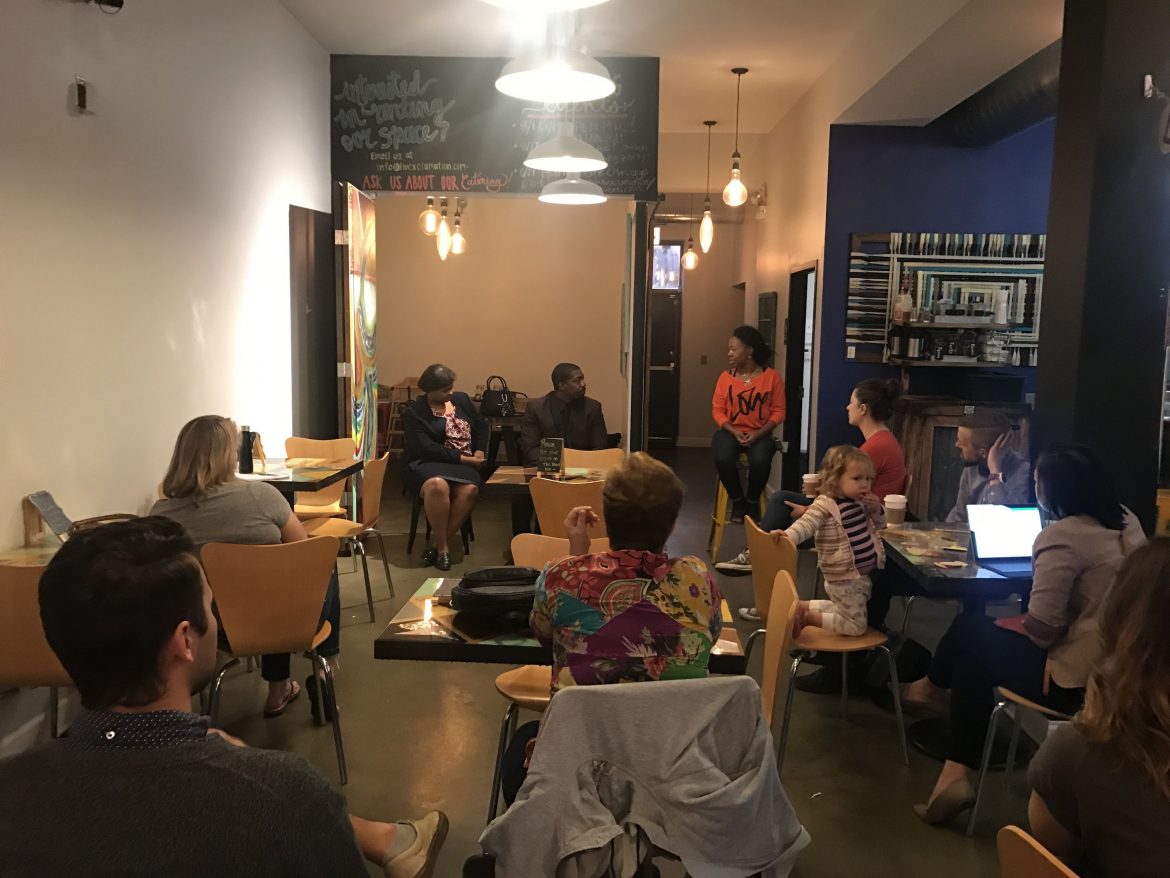 Austin’s George Leland Elementary School is seeking help from the community to get through a 10 percent budget reduction in the Chicago Public Schools new budget.

“We were met roughly with over $400,000 (in) cuts, and there’s loss of resources at the school,” Principal Turon Marcel Ivy told about a dozen parents and local business owners who gathered Sept. 12 at L!VE café in Oak Park to consider ways to help.

Leland is among most Austin schools that have lost faculty and/or staff members under the new budget, according to a recent AustinTalks story. In Austin, 16 out of 19 neighborhood schools lost a total of 47 teachers, classroom assistants and/or security staff due to the CPS cuts for the new school year.

Leland’s budget is far from adequate to cover its regular classroom activities while supporting the necessary programs, Ivy told the group.

The STEM school, which has about 400 students from pre-k to 8th grade, had to lay off its only music teacher, said Palisha Daughrity, Leland’s assistant principal.

“We cut the music teacher to bring technology in,” Daughrity said, adding the school also needs to worry about the funding of its dance program.

“We never know when that grant may be cut,” she said. “That’s why we are still crossing fingers.”

Leland has only one arts educator, who used to work as the librarian, Ivy said in an interview later.

Now that the library has no full-time employees, the arts teacher has to volunteer with other staffers to maintain its services, he added.

“We have a drama club and all type of instruments,” Ivy said. “We have a saxophone in place right now that’s just sitting there because no one [is available] to teach and provide that exposure to [students during] after-school activities.”

Other Austin schools face the same situation – having to go without full-time arts, music teachers and librarians due to budget cuts and enrollment decreases, longtime resident and school advocate Dwayne Truss said in a phone interview.

“There have been attempts to raise [money] from the Austin community,” Truss said, adding it could be “difficult but possible.”

The school used to have a partnership with the YMCA, which provided services and programs until 5 or 6 p.m., he said, adding Leland provides an “excellent education.”

While Leland’s focus is in its STEM programs, it’s important to have arts and music within their curriculum, Assistant Principal Daughrity said.

“Unfortunately, the resources have not been there to support us having arts,” she said, adding the school has plenty of young, talented students.

“Our children gravitate toward that,” she said. “You can see where they want to expand. But it’s just the limitations in which they can’t expand.”

Last week’s meeting was intended to shed light on Leland’s challenges as well as its strengths and assets, said Reesheda Graham Washington, executive director of Community First Association and owner of L!VE café.

Referring to budget cuts, “it really upset me,” said Washington, an Oak Park resident and Leland graduate, who moderated last week’s meeting, calling what has happened to Leland “injustice at its worst.”

It’s important for the community to hear from the Austin school, said Washington, the former principal of Plato Learning Academy. She encouraged the group to support Leland with their resources and connections, saying CPS has failed to provide “the capital to hire the human resources needed to support the needs of the kids.”

Daughrity said the Austin school has been through its ups and downs over the years.

“We were level 1, we were at the top of our game,” she said, citing their “uphill battle” in terms of management and academic progress since the school was forced to merge with George Armstrong and Horatio May schools in 2013.

Armstrong and May were among 49 schools closed in 2013 under Mayor Rahm Emanuel’s push for a downsized school system to reduce spending, according to the Chicago Tribune.

Leland, a former K-3 building, was relocated to May’s building, “flooded with funding and resources” at the beginning of the so-called school consolidations, Daughrity said, after which Leland lapsed into a funding shortfall, among other problems.

“We had after-school programming like the Joffery Ballet and leotards,” she said. “It was all good. But all that disappeared after that first year.”

Besides arts and music, team sports have also been cut for budgetary reasons, Principal Ivy said.

“The athletic clubs or team sports is where you are gaining confidence, collaboration and critical thinking,” he said, adding they hope to redevelop sports teams and take advantage of the school’s artificial football field and small track that are ready for use.

The school has already had a number of well-developed programs and great potential, Ivy noted.

“We have our STEM lab where they are coding and programming,” he said.

The school has fun, creative projects where children can enhance their problem solving skills for real-life issues, such as a competition where they build cars with edible materials.

“There are incredible things that are taking place,” he said, but this costs money. “We can’t do this alone.”

“It’s outrageous how they fund schools on the West Side where resources are already limited,” said Bryn Poulton of Oak Park, a clinical social worker at Barr-Harris Children’s Grief Center.

Her organization sends social workers to schools across Chicago to work with children who’ve experienced loss, she said, adding that’s a possible resource she could bring into Leland.

“We can also organize a book drive in Oak Park to help them set up their library,” she said, noting that would require a librarian to be in place.

Anne Pezalla, who owns an athletic boutique store in Oak Park, said she’d love to do something local that would have an impact in Austin.

She said she’s excited to bring a running group to Leland, adding her team is discussing details as to whether to provide volunteers or hire running coaches.

“I’m hoping I can leverage my connections with brands such as Sketchers and The North Face,” said Pezalla, adding they may be able to provide free shoes to Leland students.

Another meeting will be planned for further discussions, Washington said.

“We can mobilize and strategize the gifts and talents we have,” she said, adding she would help facilitate the proposals made last week and look for more community members to get involved.

“When the community is doing more, then the school can be freed to focus on what it’s intended for,” she said.