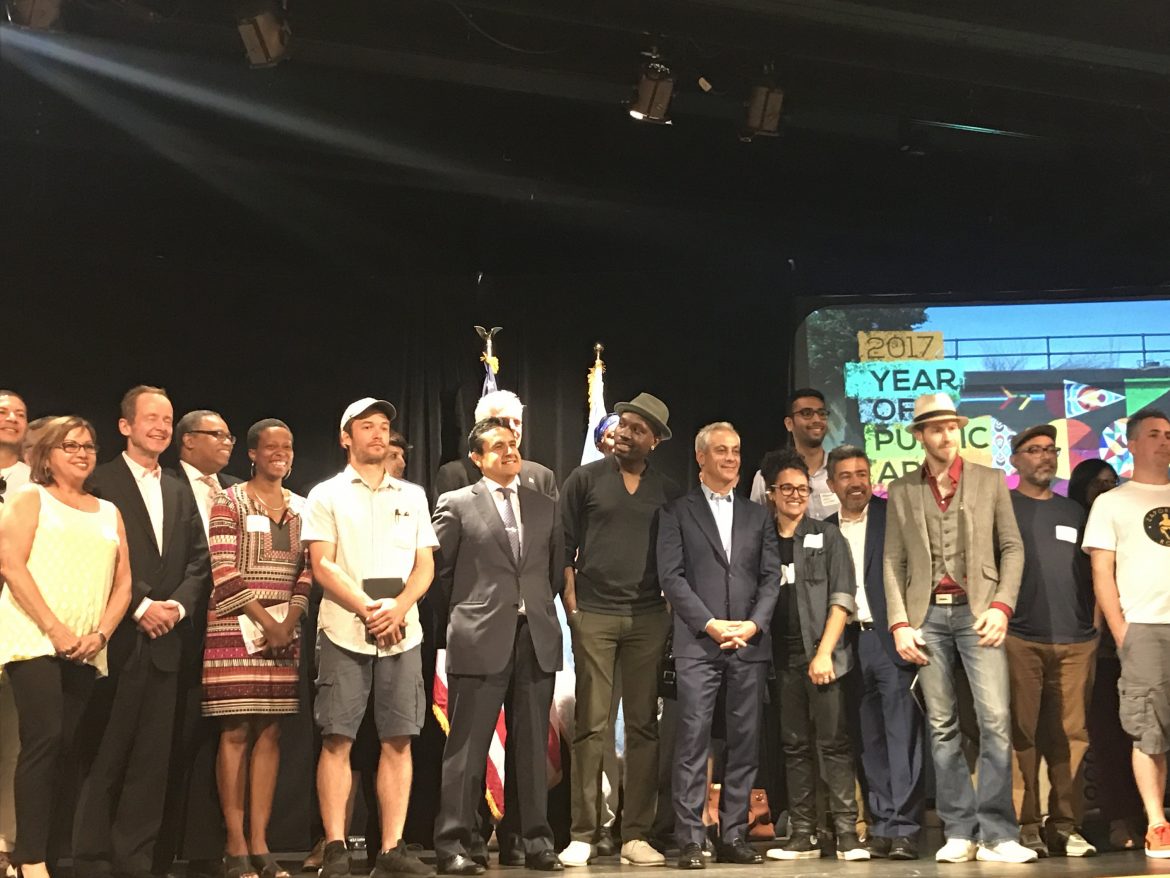 The 37th Ward is developing new art projects on Chicago Avenue and at other major intersections under a $1 million citywide initiative that will install public artwork in each of the 50 wards.

“Cities that are culturally alive and thriving are the cities that are succeeding,” Mayor Rahm Emanuel said last month when he announced 34 individuals and groups selected by 36 aldermen for the 50×50 Neighborhood Arts Project.

The project calls on each of the 50 aldermen to allocate at least $10,000 of their $1.3 million menu money – an annual fund used for neighborhood infrastructure enhancement – to install sculptures, murals and other public art this summer and fall.

The 50×50 Neighborhood Arts Project is part of the Year of Public Art – a citywide celebration of Chicago’s arts legacy and future, which will also include a series of exhibitions and events throughout the year.

“This 50 x 50 features art projects is in every ward, not just downtown or on the lakefront,” Emanuel told about 100 artists, city officials and reporters during an event earlier this summer.

The project is also marking the 50th anniversary of two iconic art pieces – the Picasso in Daley Plaza and the Wall of Respect, which once stood at the corner of 43rd Street and Langley Avenue.

Among 270 artists across the city who applied to be part of the initiative, 157 have been placed on the pre-qualified list, said Mark Kelly, commissioner of the Chicago Department of Cultural Affairs and Special Events.

“What’s exciting about this initiative is it’s something more organic and authentic, street artists being honored and celebrated in every ward of the city,” Kelly said, adding he expects the public arts to become Chicago’s “defining feature.”

Chicago has more than 500 public art pieces installed in CTA stations, park districts and on main streets, with almost 40 on the lakefront alone, according to the Chicago Tribune.

Fourteen aldermen are still in the process of finalizing projects in their wards, including Ald. Chris Taliaferro, whose 29th Ward covers much of Austin.

Some artists will complete projects in multiple wards, with each ward having a typical budget ranging from $10,000 to $30,000. The cultural affairs department will match the menu funds dollar for dollar.

So far, projects being installed on Chicago’s West Side include a photograph wall at one of the major intersections in the area and a banner at the corner of Chicago Avenue and Karlov Avenue.

The two projects, selected by Ald. Emma Mitts in the 37th Ward, are commissioned by Dorrell Creightney Photography and Industry of the Ordinary. Both are working with the alderman on the specifics and logistics, including how much money they will get from the $1.3 million aldermanic fund.

“We are right now discussing with the alderman about the location for the installation,” said Vanessa Stokes, managing director of Dorrell Creightney Photography and daughter of the late Austin resident and advertising photographer.

“We’ll have images printed on vinyl to be installed on the walls,” Stokes said, adding the project will feature two to four black and white photographs taken by Creightney throughout his life.

The images are very likely to be focused on Creightney’s street photography, especially those that document the lives and work of Chicago musicians, Stokes said.

“My father is a very versatile photographer,” said Stokes, who manages Creightney’s archive with her sister Samantha and her mother Maxine.

Dorrell Creightney, who died in 2011 at the age of 75, was the first black artist who owned a photography studio in Chicago. He’s known for pictures of models, fashion, nudes, landscapes and Chicago jazz greats.

The photograph wall will be the first permanent project developed by Dorrell Creightney Photography, she said.

The project is an opportunity to preserve Creightney’s art in Austin and to change the narrative of the West Side, Stokes said.

“We want to show positive images of black people and black lives in a black community,” she said, adding they hope to complete the installation by September. “There are positive things in our community.”

The voices of the underserved communities should be heard, said Adam Brooks, who formed the Industry of the Ordinary with English artist Mathew Wilson in 2003.

The team, currently based in Chicago, is developing a multi-part project in the 37th Ward that includes a 10-foot by 12-foot banner at the corner of Chicago Avenue and Karlov Avenue; a recorded oral history of the neighborhood; and a day-long performance Sept. 16 from 2 to 10 p.m. at the Silent Funny space at 4106 W. Chicago Ave.

The two artists, who have lived and worked in Edgewater, Pilsen, North Lawndale and Bridgeport, have done a handful of public art projects across Chicago, nationally and internationally, including a literary window at the Bucktown-Wicker Park Library building.

The oral history will be downloadable online and “stand as an ongoing record of the people who live and work in the 37th Ward,” Brooks said, adding their work is intended to reflect “the every day and the usual” through visual and performative arts.

The community needs to be more engaged in developing public arts, Stokes said.

“We do not have as much visible art in the lower-income communities,” she said, adding that’s partly because of the lack of knowledge and information about public arts promotion and its influence in communities.

“Sometimes art is secondary,” she said.

But it’s important for people to see positive images themselves, she said. And like other parts of the city where public artworks highlight their own culture and ethnicity, Austin needs the same imagery within its community, Stokes added.