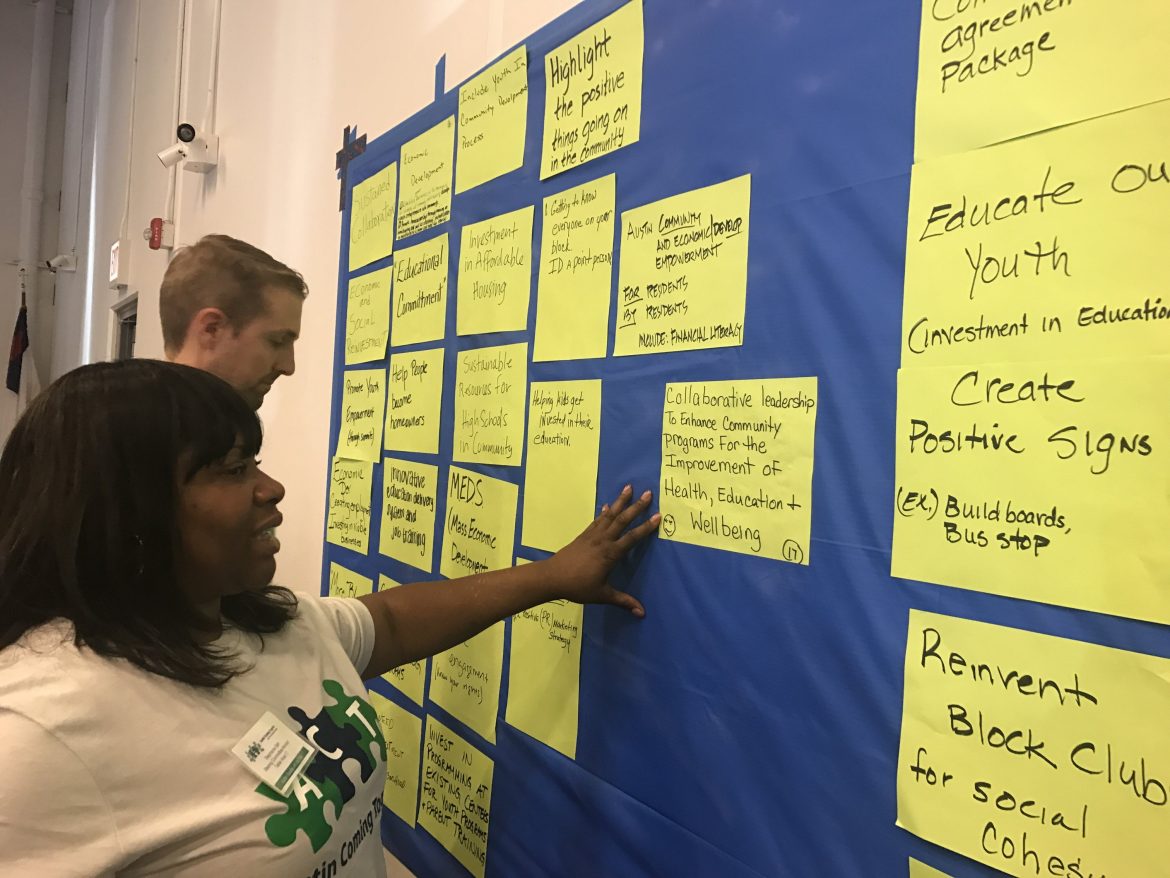 Rogers park resident Jason Toney is considering moving back to Austin with his family, probably in a few months.

“I just want the youth to have the same childhood that I had growing up,” the 37-year-old electrician who was born and raised in North Austin said last weekend during a community summit hosted by Austin Coming Together.

“We had all types of stores, grocery stores and better resources,” said Toney, who moved to Chicago’s North Side for school at the age of 16. “There was a nice middle-class work area. They had park districts, activities and everything.”

But now the former Austin resident said he couldn’t name one grocery store in or near Austin.

“We don’t have a Trader Joe’s or Whole Foods,” he said, adding the neighborhood now has too many liquor stores and too few places where Austin residents can buy healthy food.

“If we have less liquor stores (and) more food markets and community centers, it will help the community to become better,” he said, adding he wants to get involved in building Austin.

Toney was among about 200 concerned residents and civic leaders who gathered at By the Hand Club Saturday morning to share their vision for a better Austin and sign up for programs they want to see happen by 2025.

Saturday’s summit is the first of three community meetings aimed to create a Quality of Life Plan for Austin by June 2018, a comprehensive document sponsored by Local Initiative Support Corp. Chicago that is intended to help the neighborhood identify its problems while mobilizing its assets and manpower.

The document will lay out the resources and challenges facing Austin as well as specific ways for improvement, said Darnell Shields, executive director of Austin Coming Together.

“The plan process will help us agree on what priorities we need to advocate for and what access we want to take over the next five years,” the lifelong Austin resident said.

He and others have been working the past seven months to engage as many residents and civic leaders as possible to make sure the plan is “community-driven.”

Participants divided into 29 groups for small-table discussions, with each table having a moderator from Austin Coming Together.

The ideas were displayed on a wall, with residents adding their contact information under the area that they hope to work on.

“It represents unity in the community,” he said. “And it creates accountability, clarity and leadership around our potential projects.”

The next meeting will be in November, Shields said, adding they will be reaching out by Aug. 4th to participants who left their names and numbers at last weekend’s meeting.

The working groups will meet in between the summits to figure out details of the proposed plans and develop strategies.

“I think it’s very productive because not only they take your ideas they also incent an action to it,” said Toney, who put his name under the youth program category.

The plan that came from his table is to have “collaborative leadership to enhance community programs for the improvement of health, education and well being.”

“Our schools need to have better programs for those kids who take the buses and the train in Austin and Chicago as a whole,” he said, adding his 15-year-old daughter, who studies at a high school located in the suburbs, was scared to go to school in the city for safety concerns.

“A lot of our schools still use the same books like the early 80’s in Austin,” he said. “And we don’t have computers in those schools.”

Stephanie Bell, who moderated the conversation for Toney and five others, expressed the same concern.

“It is how we are educating the children and preparing them for a diverse world,” the lifelong Austin resident said, adding change needs to happen at the pre-school level.

“Sometimes we are only able to do what we are already accustomed to,” she said. “But we need to be introduced to different and better resources and avenues.”

“[People] see that even though we have the voting power, we are not given economic investment,” said Rev. Ira Acree, a 25-year pastor at Greater St. John Bible Church and longtime advocate for the West Side.

“Austin has a lot of assets and such a need for a vision for the community at large,” he said. “Hopefully, this sends a message that we are organizing in Austin, and that alone should allow bells to go off in the minds of people downtown – the mayor and all elected officials.”

Ald. Chris Taliaferro (29th), who also joined Saturday’s discussion, said the planning process is a good opportunity for community stakeholders to sit together and talk.

“One of the things that my table talked about specifically is what economic development looks like,” he said. “We were looking to identify small victories in order to make that big picture happen.”

Residents proposed a dozen of ideas on economic development, including creating more black-owned businesses and jobs that pay a living wage.

“All those colorful stickers or tips are people saying ‘I want to get involved and I want to work,’” said state Rep. Camille Lilly. “That’s important to see.”

It’s also important to let people realize they have similar ideas when envisioning a better Austin, U.S. Rep. Danny K. Davis said during an interview after the meeting.