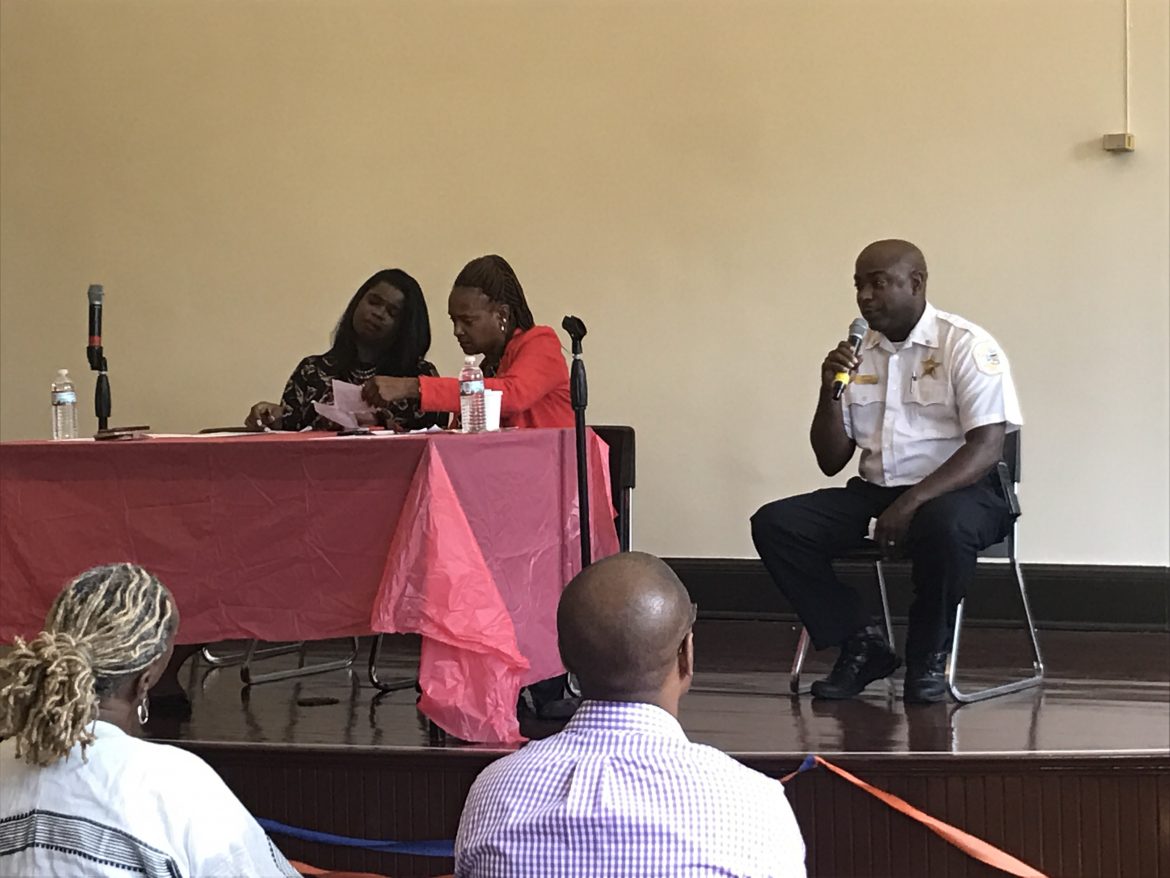 More than 30 local residents gathered at Austin Public Library last weekend to learn about recent reforms in the criminal justice system and community policing strategies that could have a major impact on West Side youths and families.

“Thirty percent of the costs in the office of the 78th District are about criminal justice issues,” state Rep. Camille Lilly said during Saturday’s discussion, where she, Cook County State’s Attorney Kimberly Foxx and 15th Police District Commander Dwayne Betts discussed major changes being made in the bond system, prosecution practice and police training as well as issues raised by residents.

“We want to increase the understanding of our different roles and ensure that we are expecting the roles we all are responsible for so we can move forward together,” Lilly said, adding the West Side needs to have more conversations about community justice and public trust.

The two-hour symposium touched on what the recent reforms would mean to those involved in the local criminal court, including the removal of cash bail for minor, non-violent offenders before trial (that takes effect Jan. 1, 2018), as well as the “vertical” prosecution process that demands each homicide case to be handled by one instead of multiple prosecutors at certain states (that was adopted in June).

“A significant portion of our $4 billion budget goes towards the maintenance of our criminal justice system,” Foxx said.  “And the biggest portion of that goes to our jail.”

The number of people held in the Cook County Jail was about 10,200 people each day in 2013 – which far outnumbered other county jails across the country, said Foxx, who took office in December 2016.

As legislative changes are pushed through the criminal justice system and significant resources flow to the jail each year, citizens are not sufficiently informed and don’t have enough knowledge about how the system works, Foxx noted.

“The presumption that people have of our jails is that people there are dangerous people who we have to keep away from us because they’ve done terrible things,” she said.

But the overwhelming majority of the jailed population is African American and Latino, a large portion of whom were there for non-violent offenses, she said.

“We have people charged with $20 worth of drugs, and we say, ‘You may have to give me $1,000 if you are to get out,’” she said, adding many minor offenders can not afford the 10 percent required to get out of jail before trial.

“We haven’t done a good job of explaining the difference between jails and prisons, and most people don’t get that,” she said. “And what we don’t talk about is the impact they (have) on the people who are poor in jail, who may actually be innocent (and say), ‘I can’t sit in jail for a month or two. I have a child. I have an elderly to care. I can’t lose my job.’”

The previous bond system led to wrongful convictions, she added, because people would plead guilty to crimes they didn’t commit to get out quicker.

Over the last eight months, the state’s attorney’s office has looked into at least nine cases of wrongful conviction that happened during the past two and a half decades, including a juvenile who served 20 years in prison due to the faulty decision, Foxx said.

Under the new law, people held in Illinois jails because of petty crimes will not be subject to cash bond as a condition of their release.

Another reform intended to address wrongful conviction is the vertical prosecution model launched two months ago, which requires the state attorney to stick with a case from police investigation to hearing, Foxx added.

That will help the victims and their families avoid re-traumatization and ensure cases are solid all the way through, she said, as a number of residents nodded in agreement.

“If you have five people who move from the decision point to the aim point, there’s something wrong with the system.”

The office has also created a gun crimes strategy unit that has taken prosecutors out of the court house and placed them in the 7th and 11th Police Districts. The goal, Foxx told residents, is to have attorneys on the ground working with law enforcement to gather intel, which will help build stronger cases.

A frequent question at the symposium: When it will be adopted in Austin and other parts of the city?

“We are trying to see how it works so that we can expand it throughout the rest of the county,” Foxx said.

The model, started in two of the police districts that had the highest rate of gun violence in 2016, is also supported by Lilly.

“I think it’s important to create a working relationship with all bodies that provide public safety to our society,” she said, adding trust between police and residents has long been a big concern on Chicago’s West Side.

In January, the U.S Justice Department released a 160-page report highly critical of the Chicago Police Department, citing the department for repeated and unreasonable use of deadly force as well as deficiencies in police training, among other issues.

The report also made recommendations in improving community trust, which, according to Lilly, is something many West Side residents have long wanted.

“We’ve seen some changes in our training about the use of force,” Betts said in response, adding concepts such as “sanctity of life” and “de-escalation” are being stressed with officers.

“There’s something we can do with our process with the individual, where we can [not only] look at distance, but we can also look at positioning and timing that could de-escalate this thing,” he said.

The 15th district police are also having more community interactions, Betts added, noting they’ve had back to school event at the police station in July and are working with the residents to prepare for the second Austin 5k run.

Residents said they had seen improvements taking place “slowly but surely” when it comes to community trust.

“The culture is slowly changing,” said Clinetta Clark, a longtime Austin resident and a member of the Greater Austin Independent Political Organization.

“Because I notice there’s area where people would congregate to make a change. They went to the police stations and they’ve cleaned up those corners,” she said, adding there’s also more police officers who would walk over and talk to the people in the community.

“That’s gonna help a lot of people who are wrongfully convicted,” she said, adding people should not be kept in the dark when “the system is biased.”

It’s important to educate people on what roles that different actors play in the system, said Foxx, who explained to the residents how the grand jury works before the symposium ended.

“The criminal justice system is a collection of a lot of players who wield a lot of power,” she said. “And how you have justice in the court is we hold all of the actors accountable.”