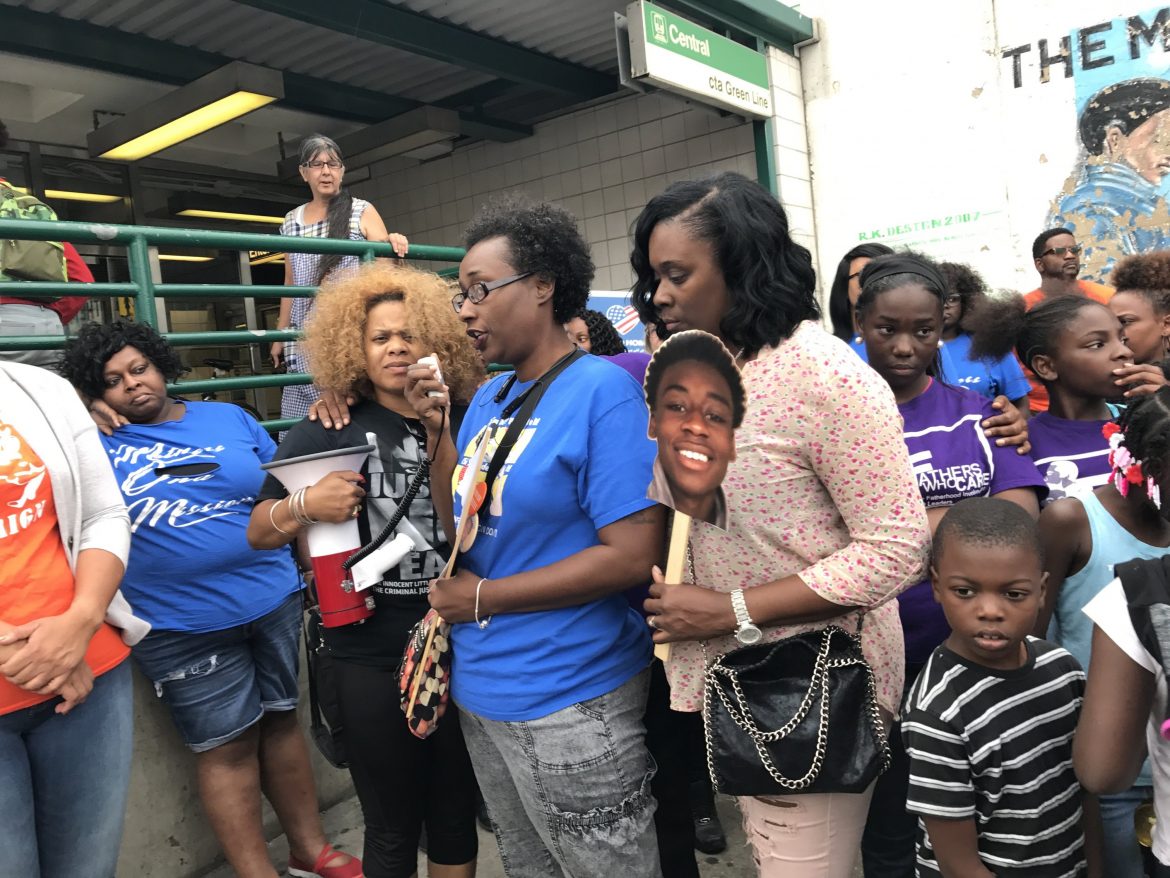 About 50 people met Saturday night at the corner of Central Avenue and Lake Street to show their support for families who’ve lost loved ones to gun violence on the West Side.

Community leaders and elected officials led a prayer of peace for the victims’ families, who gathered outside the Green Line station to remember their lost children while calling for justice. Most of their cases remain unsolved.

“It’s just devastated my family and the whole community,” Douglas said. “We have to wake up every morning and not see our child.”

The case is still not solved, he said.

“We are just waiting and trying to find out what happened,” Douglas said. “I’m really unsure of what really happened. No witnesses, not anything.”

Douglas was among more than a dozen parents and grandparents of murder victims who then marched to Laramie and Jackson, where Emmanuel Fleming, 34, and Michael Swift, 46, were killed on the front steps of Friendship Baptist Church as they made their way to Sunday services earlier this month.

Families and friends of the victims spoke about the surge in gun shootings in Austin, with their cases ranging from 2012 to just months ago – all of which remain unsolved due to the lack of witnesses, they said.

“It’s unacceptable that the solve rate for murders in Chicago is under 30 percent,” Rep. La Shawn K. Ford said. It’s almost as if you can “get away with murder in Chicago.”

According to Ford’s office, there were 537 shootings in 2016 in Austin, the most of all of the city’s 77 community areas. And the neighborhood is on pace to surpass that number this year.

Ford urged police and the community to work together to catch the killers.

“We want to help solve those crimes so that the parents [can be living] a lot more easy with the loss of their loved ones,” he said.

Among the crowd were also young children who’ve lost their mothers or fathers to violence.

“My son is gone; he left his children here,” said longtime West Side resident Bertha Purnell, mother of Maurice, who was gunned down in front of a barbershop after leaving his mother’s West Side house June 24.

She, too, was told there was no witnesses to her son’s shooting.

“I need help, I want justice,” Purnell said. “We need to have something done. In Chicago, kill somebody and get away with it. It has to stop.”

“There has not been any justice,” Galloway said. “We can’t sleep at night. Our lives have been changed forever.”

Sims, who was a student at Oak Park and River Forest High School, was shot as he made his way home on his bike before his new curfew.

“Elijah was turning 17. And he has always had a 10 o’clock curfew,” Galloway said. “But the first day of his new curfew, which is 10:30, he got shot. He never even got a chance … He would have started college if it weren’t a murder.”

Galloway urged neighbors to stand up and speak out as witnesses, as she and her sister are still actively looking for evidence.

“If somebody sees something, say something,” Galloway said. “We would have a little peace, just a little bit, if we had justice.”

Some in the crowd said there needs to be more support of young people in the community.

“The solution is we need these youths to have better employment and education opportunities,” Douglas said.

“What we need is some type of program to be implemented to get these youths off the street,” he said, adding the after-school programs such as Boy Scouts and sports team he knew while growing up in the 1970’s have all been cut out.

He also urged young men in the neighborhood to think twice before they act.

“I just wanna tell everybody, please put the guns down,” he said. “And there’s one thing I need all you youth to do: If you are ever to make any decisions again in life, just think, is it worth my life?”

While police should have the necessary technologies to solve murders, the city should also work on reducing the number of guns coming into the West Side, Rep. Ford said.

“There’s too many guns in our community,” Ford said later in an interview. “We need to urge and invite our federal government to cut the flow of guns to the city and the state of Illinois.”

State Rep. Camille Lilly said the community must come together against the senseless shootings.

“We are here today to address our issue – which is our young people are dying, our families feel broken,” she said.

“We must stand together and come up with a solution that together we can work on,” she added. “We will walk today to let you know that we care.”

The crowd then headed toward Laramie and Jackson, with parents, young people and community leaders chanting, “What do we want? Justice. When do we want it? Now.”