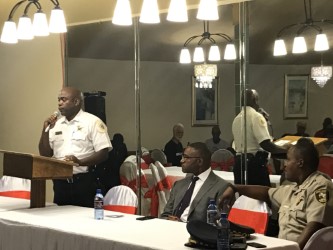 West Side residents, activists and elected officials rallied at a local church Wednesday evening, exchanging safety tips and discussing ways to curb gun in a neighborhood that once was the most populated in the city.

“Austin is no longer the largest neighborhood in the city of Chicago,” Commissioner Richard R. Boykin told about 40 people who attended the “state of emergency” meeting Wednesday at Pleasant Ridge Baptist Church, 116 S. Central Ave.

“We are now No.2 because people left big time,” Boykin said, adding the continuing violence worries many in the Austin community and drives some people away.

Austin’s population has dropped to 97,600, down by about 20,000 from 2000, according to a recent Chicago Tribune story. This is the first time in more than 40 years that Austin has lost its title as Chicago’s most-populated community area. Now it’s second to Lakeview, which has 98,200 residents.

But Austin still leads all the city’s 77 community areas in terms of the number of people shot and killed, Boykin said.

From Jan. 1 and July 13, Austin has seen 258 shootings, according to data compiled by the Tribune. As of May 2, there were 130 shooting victims in Austin.

“There have been at least six people shot in Austin today,” Boykin said, adding more than 2,000 people have been shot in the city so far this year and 400 have been killed.

Just two hours before Wednesday’s rally, three people were shot in the 5500 block of West Van Buren, including a 4-year-old girl and a 6-year-old boy, said Dwayne Betts, commander of the Chicago Police Department’s 15th District.

The shooting occurred just blocks from Pleasant Ridge Baptist Church. The bullets injured the 4-year-old’s and grazed the 6-year-old as they were sitting in a car, Betts said.

Evidence shows that several shots were fired from inside the car, he added, and the 27-year-old inside suffered a gunshot wound to the chest.

Incidents like this have caused people to leave the area, said Austin residents during Wednesday’s gathering. They called on the city to take action to curb the gun-violence in their community.

“It seems to have escalated,” said four-year Austin resident Patricia Lacey, 59, who lives in the 5400 block of West Gladys Avenue. “It’s just like living in a war-torn country.”

“They shot five people at the end of my block the other week,” she said, adding she’s careful about when she goes outside because she’s afraid of becoming a victim.

The city and state need to fund programs that can help reduce violence, Lacey said, and those programs need to be more visible. The city needs to take action, she said.

“Usually, guns in Austin is the last thing in the dock,” she said. “But something really has to be done because the hard-working people are going to move out of Austin and leave it to the drug dealers.”

“There’s no high school that offers a full curriculum from P.E. to social sciences in Austin, and that’s a huge problem,” said the 28-year-old, who volunteers in the Good Neighbors Campaign – which aims to empower residents and create safe communities.

She said the city shows little concern about the state of education in Austin, which leads youth down the route of crime and violence.

“Our kids don’t really have a chance competing in college and getting a job,” she said. “But the entire city does not care about having a full-service high school in this community.”

The Good Neighbors Campaign was extended to Westside Health Authority in 2016.

“There’s a lot that we can be doing to assist the Austin community,” Ousley said, adding their impact could be much greater than if there were more funding.

Commissioner Boykin repeated his wish for Gov. Bruce Rauner, Mayor Rahm Emanuel and Cook County Board President Toni Preckwinkle to recognize there is a state of emergency in Austin and other parts of Chicago.

“They declared one for floods, the governor in Nevada declared it for a shortage of weed,” he said in an interview after Wednesday’s meeting.

“There’s a failure of government at every level to protect people and serve the neighborhoods,” he said, stressing the need to share survival tips and encourage people to protect themselves.

“These are practical tips we all can do,” Boykin said, adding residents can’t wait for the government to act.

Three more tours will be held in West Garfield Park, Englewood and North Lawndale in August, Boykin said. He added it’s important to have honest conversations addressing the four communities experiencing the most violence.

View all state of emergency Posts →