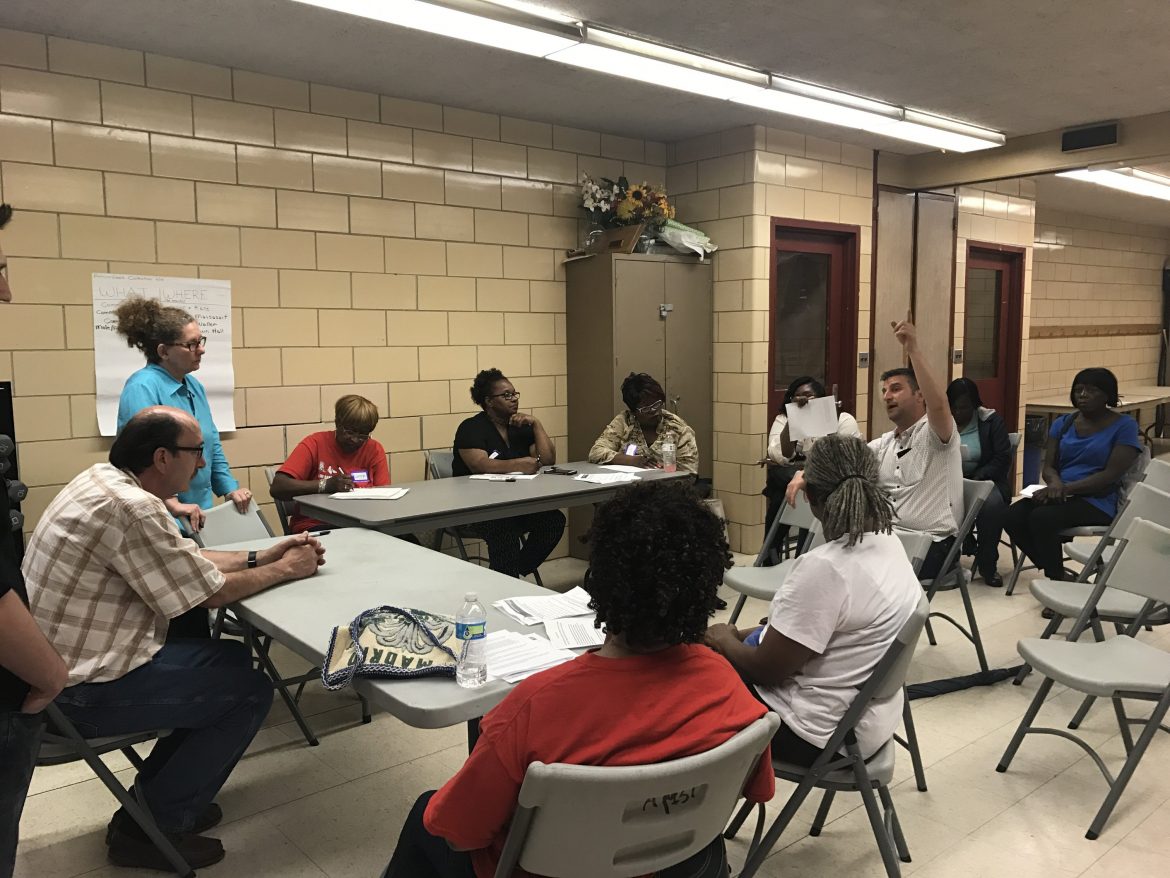 West Side residents turned out for the first of three meetings to share their thoughts on how to spend some of the approximately $1.3 million “menu money” slated to be spent in the next year in the 29th Ward.

“Austin is not a community where they are doing a lot of developments,” said Austin retiree Maria Sorrell, who suggested a community garden at the corner of Waller and Race avenues.

If vacant lots can be turned into community gardens, she said they won’t become eyesores or even trash piles.

Latrice Whitfield, 50, said she’d like to see an art tower on North Avenue that can represent the history of the ward.

“We need more visual landmarks that show people where they are, so more people can feel proud of our history and reflect on its meaning,” said Whitfield, adding she has taken pictures of the site and would e-mail them to Ald. Chris Taliaferro’s office.

Last week’s meeting is the first step in the 29th Ward’s “participatory budgeting” – a process that allows residents to propose and vote on  neighborhood projects they want to be funded. In most wards, that decision is made by the alderman without input from residents.

“Some past projects have been banners, dog parks or exercise equipment in a park,” said Terry Redmond, who’s in charge of the ward’s participatory budgeting process.

Projects should be permanent, require no upkeep, serve the public and be located in residential areas, she told about a dozen people who attended last week’s meeting.

Participants are asked to fill out forms that include their proposed ward projects and where they should be located. Forms can be obtained at meetings being held this week and next – Rutherford-Sayre Park on June 21 and Columbus Park Refectory on June 28 – or at the alderman’s office.

Redmond said attendance was lower than expected at the first meeting due to the heavy rain, but traffic on Facebook has been fairly good.

“I think [the meeting at] Sayre is going to be a lot larger,” she said, adding the residents would be breaking into small groups to discuss projects if turnout is better.

At last Wednesday’s meeting, participants came up with more than 10 ideas, including building community parks at Massasoit, Mayfield and Division avenues, fixing the lockers in Austin Town Hall and adding color changing lights on Central Avenue and Austin Boulevard.

“The purpose of this assembly is to get input from the residents as to what kind of project they want to see throughout the ward,” Ald. Chris Taliaferro (29th) said in a telephone interview. “It’s an incredible way to keep the community involved.”

Taliaferro wasn’t at last week’s meeting; instead he attended a community meeting about redeveloping the former Emmet School as a new health center at 5500 W. Madison Ave.

The first-term alderman has set aside $500,000 from his aldermanic fund for projects to be developed in 2018. The alderman’s office will work with community representatives to develop those ideas into proposals by the end of August; have residents vote on the list in October; the winning ideas would be submitted to the city in February.

Voting will be open to all 29th Ward residents who are 14 years old or older.

“We are still gonna have the discretion as to which infrastructure projects we should take care of when it comes to which street, which alley we will be paving or repaving,” Taliaferro said, referring to the remaining $800,000 menu money.

“I want to continue to work on our roads and streets,” he said.

Information from the Chicago Department of Transportation – along with citizen input – will help determine which streets are in the worst condition and most deserving of repair, he said.

Some residents say the amount the alderman allotted for participatory budgeting is too small to make a real difference.

This is the second year Taliaferro is using participatory budgeting to decide how to spend part of his menu money; that was a campaign promise he made before defeating incumbent Ald. Deborah Graham two years ago.

Due to urgent infrastructure needs on Chicago’s West Side, Taliaferro didn’t launch the process when he first took office in 2015 but waited until 2016 to set aside $700,000 for participatory budgeting.

That year, most of the 10 projects voted on by about 80 residents were funded: three community gardens, two pedestrian islands on North Avenue, two murals and exercise equipment at Amundsen Park.

The mural at the intersection of Central Avenue and Lake Street has been completed, Taliaferro said, while other work is either being designed or under construction.

Because of the relatively low voting turnout last year, Taliaferro is working with University of Illinois at Chicago Great Cities Institute – which has been providing information and training for other wards doing participatory budgeting since 2012 – to organize meetings, handle voting and enhance promotion.

“It’s always important, in my opinion, to allow the community to participate in government process,” Taliaferro said, adding he was aware of the model initiated by Ald. Joe Moore (49th) before winning a seat on the Chicago City Council.

Moore was the first alderman locally to adopt the participatory budgeting model. Since 2009, Moore has allocated about $1 million of his menu money each year in this manner.

This year, a total of 2,911 residents cast their ballots (some of them online) in Moore’s North Side ward. They decided 64 percent of the $1 million would go to streets and alleys, with the rest going to trees, gardens and new benches.

Ald. Emma Mitts (37th) did not respond to an interview request from AustinTalks to learn how she plans to spend her ward’s menu money; she has not used participatory budgeting.

Nine out of the city’s 50 wards are using this model, with the 29th Ward being the only participatory budgeting ward on the West Side and the newest one citywide.

Dick Simpson, a former North Side alderman who’s now a political science professor at the University of Illinois at Chicago, said participatory budgeting is necessary but not something many aldermen have adopted because it’s time consuming.

“I think the aldermen who use it are more in touch with their constituents,” Simpson said. “And the projects in those wards have satisfied more people.”