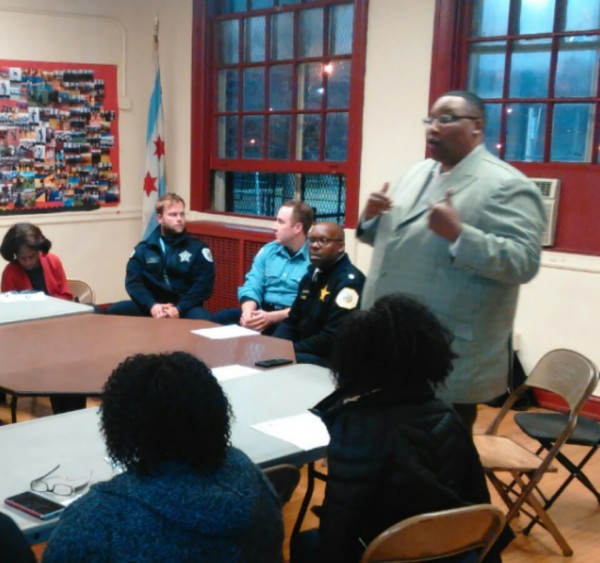 Residents of the 28th Ward want one of their closed schools to be used for affordable residential housing, and they want their alderman to ensure that happens.

Ald. Jason Ervin told residents at his monthly meeting last week that he agrees with their wish for William King Elementary School, 740 S. Campbell, which closed in 2013.

But Ervin stressed that housing wasn’t a done deal yet and the property still has to go through Chicago Public Schools’ bid/purchase process.

Residents were surprised when Ervin updated them on the process – that two bids for the school are currently being reviewed by CPS, one for single-family homes and the other for “school use.”

Residents said they made their intentions clear at an earlier meeting held by the alderman, where they took a public vote in favor of residential housing. Residents accused Ervin of backing away from that commitment and playing “politics” with the property now.

Ervin stressed that his position hasn’t changed but that he has no control over who submits bids to CPS and for what use. The alderman said if any winning bid is something other than residential housing, then that would need to come back to the community for more discussion.

But that explanation didn’t satisfy some of the roughly 50 people listening last Tuesday at Altgeld Park’s Field House.

“So what was our first meeting for? What was the point of that?” asked one resident.

Ervin said that meeting was to get community feedback about what they’d like to see at that site, adding: “Nothing has been decided. Nothing it final.”

King Elementary was among 50 schools closed by CPS in May 2013. Residents of the 28th Ward said the shuttered building, which covers roughly 51,000 square feet, has attracted drug selling and loitering.

Some closed schools have been purchased since 2013, including Austin’s Leland Elementary School, 512 S. Lavergne, last year by youth nonprofit KidzExpress.

This year’s deadline for bids on about 30 closed schools was March 13.

King Elementary is in an area zoned for residential properties, designated as “RT,” which includes two-flats and town houses, and “RM” for multi-unit housing. Ervin said any parcel can be re-zoned to a specific purpose based on the community’s desire.

“If somebody comes with something other than a single-family residential concept, we’ll be back here for discussion,” Ervin said.

One resident speaking with AustinTalks, who didn’t want to give his name, said they were being told something completely different.

“There was a vote. They sat their and counted, and they made everyone believe that’s what they were choosing, and now he’s telling us the opposite,” the resident said.

Ervin told AustinTalks it was unlikely that King would be used for some other use but acknowledged “there’s always the possiblilty” that might not happen.

“I can’t stop CPS from selling that property to the highest bidder,” Ervin told residents.”Whoever wins the [King] property, it’s totally up to the community to say yes or no to what’s being presented.”