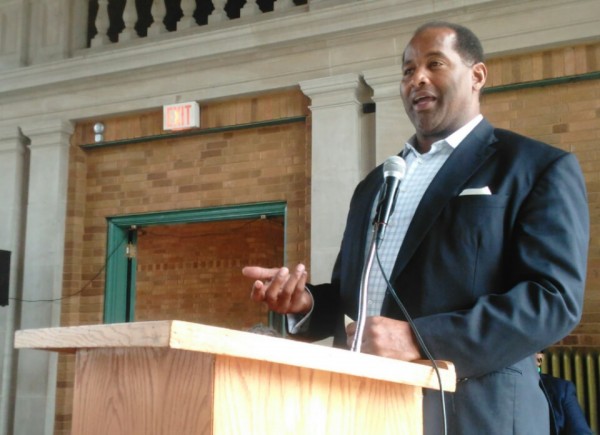 A Chicago Bear Hall of Famer and businessman visited the West Side last week to announce the launch of a new technology meant to help protect children and elders.

Dent’s company, RLD Resources, a energy and technology management firm, is developing the technology. The program will allow children and elders to sign onto the service on their smart phones.

Once activated, a child will be able to report a cyber-bully and other threats sent via text, a call or social media. A sick elder can use the service to contact family and a hospital if at home alone.

Dent said the technology is being rolled out locally in Illinois before going national. This program uses artificial intelligence (AI) to report activity in real time. The program’s signal will go to a child’s parent or school counselor, or to the police, whoever is signed into and has access to that child’s safety network, or to a loved one if it’s an elder.

The service is expected to roll out this spring at several schools throughout the state, including Austin’s Plato Learning Academy.

“It’s all about protecting people,” said Dent, who founded his Chicago-based firm in 1999. Dent said the company has been developing the safety program for about four years.

“We want to protect our kids,” Dent said. “Gang warfare, hate crimes, cyber-bullying – it’s a cyber-warfare going on in the technology space. There’s no filter sitting in that space to protect the kids.”

The AI technology is also set up to use motion detection, allowing a child under threat to shake their phone to send a signal to their safety network. The GPS can track a child’s location and, for instance, activate if he or she takes a different route coming home from school.

“If you’re a parent, someone needs to be aware of what is taking place, who’s receiving what and who’s doing what,” Dent said.

Once it hits the market, the service could be offered at a very low price, Dent said. The former Chicago Bear said the technology will eventually be offered to college students and adults.

Cyber-bullying is a problem affecting millions of U.S. children, according to federal government data.

About 2 million school children reported being bullied via text, instant messaging or email during the 2010-2011 school year, according to a U.S Department of Education survey of school children ages 12-18.

Some 24 percent of middle schoolers and 15 percent of high schoolers report being cyber-bullied, according to the Centers for Disease Control and Prevention.

Plato Principal Charles Williams said he hopes to introduce the program to his students before the school year is out.

“When I heard the idea that students can be protected, I jumped all over it,” Williams said.

Plato is a K-8 school located on two campuses – the middle at 116 N. LeClaire and the elementary school at 5545 W. Harrison. Williams said the program is like having another advocate in the building to protect the students.

“Unfortunately, my daughter had an issue herself where somebody was trying to mess with her online. So I always approach things not only as a principal but as a father. For a parent to have more advocates in the school if something happens is a wonderful opportunity.”

Dent said he wants to get local law enforcement on board with his program, adding that the FBI has endorsed it.

Dr. Afi Hasan of the FBI Chicago Citizens Academy Alumni Association touted the program’s possibilities. He said the technology is meant to identify objectionable behavior by people looking to harm others, with cyber-bullying as just one aspect.

“We’re talking about cutting-edge technology,” she said. “When you’re looking at organizations that work with children, and hospitals partnering with their patients that need monitoring, there is no limit how far this can go.”

Dent played for the Chicago Bears from 1983 to 1993, winning a Super Bowl and being named game MVP in 1985. The defensive end was part of the famed ’85 Bears. He retired in 1997 following stints with the Indianapolis Colts, Philadelphia Eagles and San Francisco 49ers, where he won a second Super Bowl in 1994.

Dent, who entered the business world in the late 1990s, said he expects his new safety program to hit the market big.

“We know that we have a ground-breaking technology, and we want to get it in folks hands so they can monitor their kids,” he said.