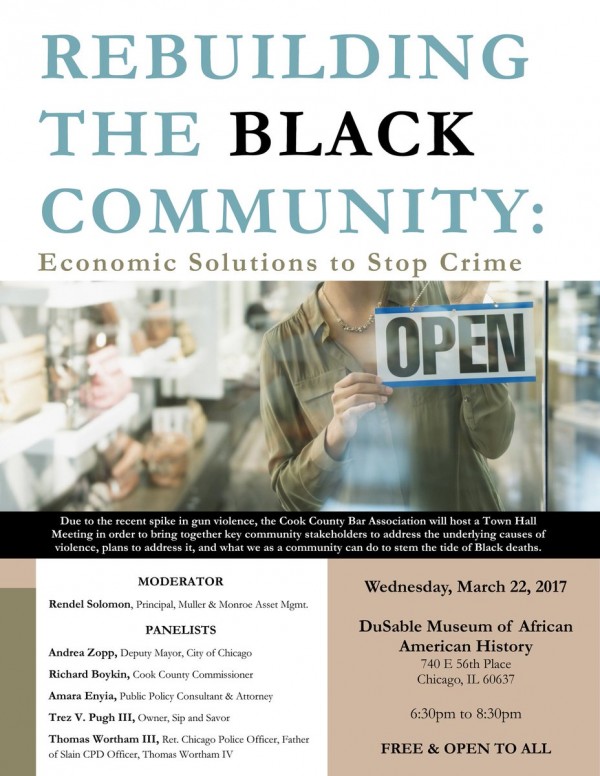 The room was so packed at the DuSable Museum of African American History Wednesday night the audience was lined against the wall and spilled out into the hallway.

The South Side museum and the Cook County Bar Association hosted a panel discussion on solving violence in Chicago’s African-American communities through economic opportunity.

Boykin said young people in the African-American community need mentors and visible leadership to deter them from becoming involved in gangs or selling drugs.

“A child can’t be what he can’t see,” Boykin said. “They’re going to eat one way or another. I’d rather that they eat legally.”

Pugh said he valued mentorship but countered that as a business owner, he often finds it difficult to hire reliable people in his coffee shop, Sip and Savor. He said young people have an “attitude of entitlement” and frequently show up late, or not at all, to a new job.

He recounted a  new employee telling him, “I’m only an hour late.”

Panelists hotly debated whether Chicago youth are the problem, at one point requiring the moderator to step in amid shouts of disagreement from the crowd.

Zopp said the city has programs like One Summer Chicago, which offers employment and internship to 14- to 24-year-olds unable to get a job or training elsewhere. Zopp said programs like these help better equip young people for the workplace, but she acknowledged training and soft skills should continue to be a focus.

One Summer Chicago employed more than 31,000 young people last year out of 77,000 who applied.

Boykin said another issue facing the black community is lack of unity. He challenged the audience to work to solve problems themselves, instead of waiting for city and state government to work through slow, legislative processes.

“The reality is, will we support each other? We could have collectively [worked together] but we didn’t do it,” Boykin said.

He noted that Willie Wilson, a former Chicago mayoral and presidential candidate, chipped in his own money to cover bail for those who couldn’t afford it and to help others pay delinquent property tax bills.

After the panel discussion, Enyia said she felt confident the discussion would lead to actionable solutions, especially for the Austin community. She said many of the organizations mentioned were specifically founded to address the needs of a community like Austin or are already operating in the neighborhood.

“For me, it was about offering solutions, tangible solutions,” said Enyia, who serves as executive director of the Austin Chamber of Commerce.