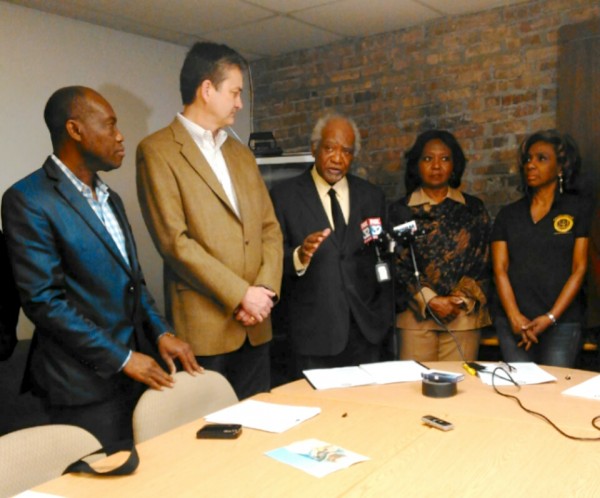 About 20 million Americans are currently covered under the health care reform law that took effect in 2009 under President Barack Obama. In Illinois, roughly 1 million people are covered.

The Trump administration and Republican majorities in Congress are intent on gutting the law with their “Repeal and Replace” strategy, Obamacare supporters warned Saturday in Austin.

“We have to make sure that our citizens have the highest form of life that we can possibly afford and the opportunity to live it,” said U.S. Rep. Danny Davis, speaking at a press conference at Circle Family Health Care Network, 5002 W. Madison.

Davis, a former 29th Ward alderman and Democratic committeemen, was among a dozen or so lawmakers and health officials at Saturday’s press conference. The state’s poor population, they noted, would suffer the most if the law is repealed.

About 3 million Illinoisians are insured through Medicaid, according to state data compiled by The Civic Federation, a Chicago-based watchdog organization. Roughly 670,000 recipients enrolled last year alone via Medicaid’s expansion under “Obamacare,” a population that’s at risk of losing their coverage, advocates warned.

“The thought that someone would even talk about repealing the Affordable Care Act is unconscionable,” said South Side state Rep. Mary Flowers, whose district includes the Auburn-Gresham neighborhood.

Flowers said anything short of “Medicare for all” is not worth discussing with respect to repealing Obamacare. She also had a message directly for the president.

“Trump needs to be put on notice: health care needs to be affordable and accessible to everyone,” she said.

John Stroger Hospital on the West Side has seen an increase in patient covered under the ACA, said John Shannon, CEO of Cook County’s Health and Hospital System.

“For the first time in the history of my health system, we are taking care of a majority-insured population. That has happened directly because of the expansion of Medicaid under the Affordable Care Act,” Shannon said, adding that Cook County has about 300,000 new Medicaid-expansion recipients.

Congressional Republicans have changed their tune since Trump’s election, going from “Repeal and Replace” to “Repeal and Repair” but have yet to offer a specific proposal.

Advocates insist the current law should be strengthened, not eliminated.

“What we should be talking about is how do we insure more people, not turning the clock backwards,” Shannon said.

Monica Fox, a kidney transplant survivor, said her ordeal would have been more difficult without her health coverage.

Fox, a retired medical administrator, was diagnosed three years ago with end-stage renal disease, resulting in kidney failure. Her treatment, including daily dialysis, was costly but covered through Medicare.

“To have to be worry about your insurance coverage while going through that adds a level of stress that would literally kill you,” said Fox, who received a new kidney just before Thanksgiving of last year.

“We can’t sit back and allow people to determine that we are not worthy of the care needed to maintain our lives.”