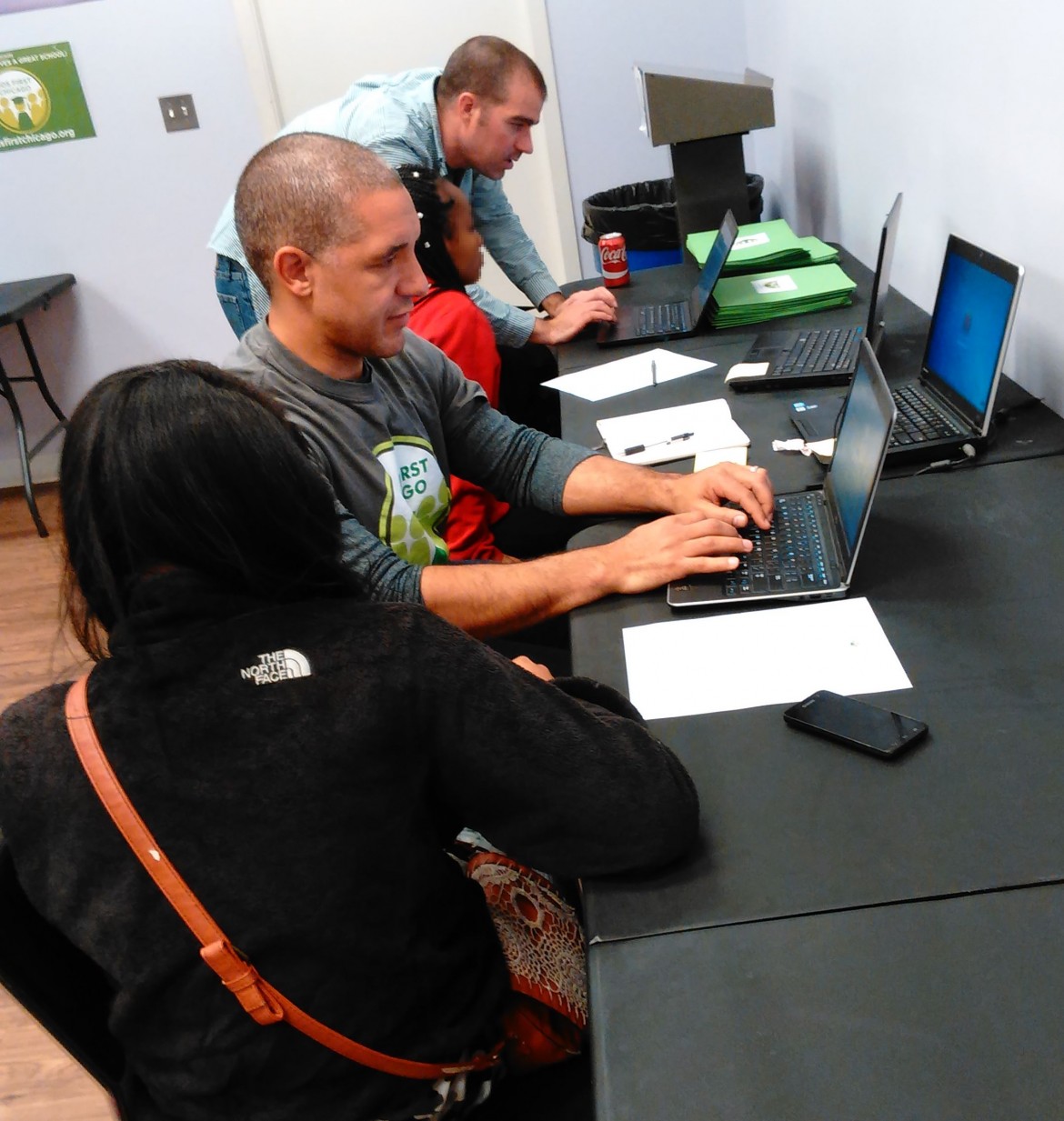 About a dozen teens spent that time pecking away at computers searching for high schools and filling out enrollment applications. Angela Bowman’s 13-year-old son was among them, spending about an hour with a Kids First Chicago volunteer.

“If you don’t know a lot about the high schools in the area, it makes it just easier for parents and 8th graders to know their options,” said Bowman, who also works at BUILD in its youth entrepreneurship program.

That’s the idea behind the workshops, said Daniel Anello, New Schools Chicago’s CEO, who was there on that recent afternoon helping teens at BUILD, 5100 W. Harrison.

Some 2,000 applications were filled out and submitted online during the workshops, in time for Chicago Public Schools‘ Dec. 9 enrollment deadline. CPS is expected to begin notifying students of which school/s they got into in March.

The workshops were not just for 8th graders but any elementary school student or parent looking for high school information, Anello said.

Of the roughly 250,000 students enrolled this school year in grades 1-8, about 27,000 are 8th graders, according to Chicago Public Schools data. Along with applying to schools, volunteers help families determine a school’s overall performance rating or if it has a selective enrollment process.

And while some families know how to navigate the system to find good high schools, many do not, said Cymone Card, a community organizer with Kids First Chicago.

“Some kids can have their parents come, and some kids are doing a lot if this on their own,” she said. “It’s really hard for parents to navigate it, so for a kid to navigate the system on their own can be very overwhelming and confusing.”

For Bowman, who lives on the West Side, this was her first time looking at high schools for her oldest son.

She said she started looking for schools during his 7th grade year. Bowman wants to find a high school nearby, not wanting to travel too far if there’s an emergency at his school. Bowman said her son’s not sure where he wants to go, but she’s interested in him attending a military academy.

“He’s a young man, and I believe they need structure, and I think that would be very helpful for him. He has good test scores, so he wouldn’t have a problem getting into any school,” she said of her son, who attends George Tilton Elementary School in West Garfield Park.

Kids First Chicago focuses on public high schools but helps direct parents to the best resources for private schools if that’s their choice.

The workshops helps students find schools with a good sports program if that’s what they’re interested in. For students with special needs or a medical condition, the workshops help make sure a school has a nurse on staff.

“As a former educator, I know all that. But you can’t expect a parent who’s got 50 million things on their plate to be able to do this,” Jenkins said. “There’s a lot of things to think about, and this information is not always easy to get.”

It was mostly students attending the recent workshop at BUILD. Some helpers, like Jenkins, were on the phone with parents while helping their students. The nonprofit even helps families after enrollment session.