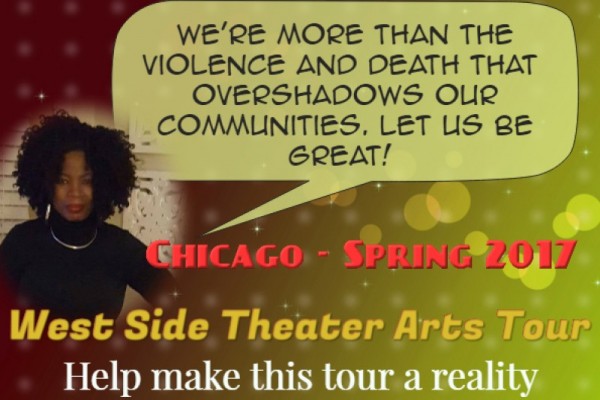 A Chicago playwright wants to use the arts to address the growing violence in the West Side community where she was raised.

Growing up in Garfield Park, Larryann Aaron saw firsthand how violence ravaged her neighborhood. Aaron is planning a string of theatrical productions throughout the West Side starting in the spring, with a focus on positive solutions to violence.

The “West Side Theater Arts Tour” is slated to run from March to August. Aaron has launched a GoFundMe campaign to raise money for the productions, and she’s reached out to the Chicago Park District for possible locations for some of the shows.

“The tour is meant to be an outlet for people to have positive activities that they can engage in,” said Aaron, who began writing and producing plays four years ago.

Her first play “Angry Sistah” addresses the stereotypes associated with how black women deal with their anger in relationships and society. She was inspired to write it after networking with black women on a Facebook group. She’s also written plays about gun violence and how black men are displaced from their families and community.

The theater tour will tackle some of those issues as well, Aaron said. Her shows are largely self-funded, sometimes at a financial lost, leading Aaron to try GoFundMe this time.

“Sometimes we put on these plays and don’t make a dime, but we’re not doing this for the money,” said her sister, Pearlie Aaron, who helps with marketing and producing.

Garfield Park nonprofit Fathers Who Care is co-sponsoring the theater tour, part of a “Arts Against Violence” initiate the organization has launched. Aaron said she wants to recruit talent from the community to perform on the tour, which will happen regardless of whether she reaches her $30,000 GoFundMe goal.

“It might be on a smaller scale, but it’s a go regardless,” she said. “I’m 100 percent confident that the tour will be a success and do everything that it’s supposed to do.”

Pearlie Aaron adds that they’re not looking to make a buck but a difference. The sisters are part of a large family, with 12 children in all. Pearlie said they routinely recruit their siblings to help out with their shows.

The two sisters work well together, both noted, with Aaron more of the artistic introvert and Pearlie the organizing extrovert.

“We’re kind of a tag team, so whatever needs to get done we typically do it together,” Pearlie Aaron said.

Her sister is hopeful next spring’s tour will lead to another of her goals: creating a cultural arts center on the West Side.

“We feel really passionate about trying to bring some culture back to the West Side of Chicago,” Pearlie Aaron said. “A lot of the black authors and plays typically take their venues further south, but we’ve been trying to keep our venues out west.”

Aaron said her shows are free to the public. And while she wants to entertain her audience, she also wants to leave them with a message.

“What I have to offer is just words of encouragement through my writing that God has put upon me to utilize,” she said. “I’m just passionate about my people and seeing them in a better condition.”