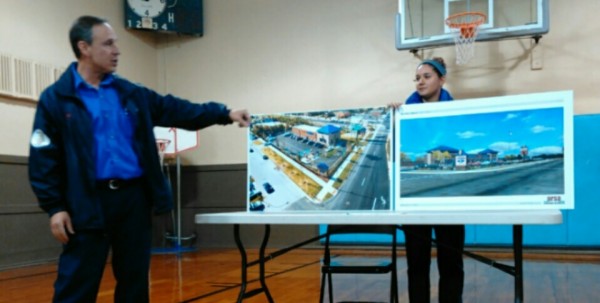 A vacant former US Bank building on North Avenue in Galewood is drawing interest from potential developers, says the property’s owner.

A national fast food chain as well as a grocery store are among those interested in the former bank and adjacent parking lot.

US Bank moved out of that location earlier this year. A Chicago car wash chain is also interested in the property.

The owner, Phillip Degeratto, discussed the property with Galewood residents at a community meeting Wednesday night.

The majority of residents, however, were vehemently opposed, and some even hostile, to the idea of a car wash at that location.

But residents cited traffic and safety problems that the business would bring. Residents were also concerned about whether the site would be able to sustain the amount of water needed for a car wash.

Barbara Lewis, who lives on the 1600 block of Normandy north of North Avenue, was among those opposed to a car wash.

“I’m concerned about the volume of traffic,” she said. “Right now, I can’t even get across the street to get to the bus, so I need something that brings a low volume of cars.”

Residents instead suggested either a library or office building at the site.

Ald. Chris Taliaferro (29th) said he’s open to a library, but the city would have to purchase the site. Taliaferro said the city has no plans to do that because of its current budget shortfall.

Any other proposal for the site will be brought to the community for vetting, the alderman added.

Taliaferro also assured residents that the car wash idea is not a done deal but one of many proposals he plans to bring to the community.

“Any project that wishes to be a part of this ward, we present it to the community first,” he told the roughly 60 people in attendance.

After hearing from residents Wednesday, Degeratto expressed doubt that his proposal will be accepted.

“I think right now they’re not too warm to it,” he told AustinTalks. “They’re worried about the traffic, legitimate concerns. Maybe if they do experience one of our car washes, they may feel more comfortable with it.”

Degeratto, who’s been in business for 30 years, said he’s interested in Galewood because he grew up nearby in Oak Park.

Cairo, a Galewood resident himself, said he was surprised by the residents’ hostility toward the car wash. Cairo said he liked the library idea and ultimately wants to do what’s best for the community.

“You can put a pretty nice library there if we can work something out with the city, maybe,” he said.

US Bank, meanwhile, is consolidating its footprint in the area. The company is doing a tear-down and rebuild of its drive-thru facility at 6729 W. North Avenue in neighboring Oak Park.

Residents will have a final say about the car wash proposal at Taliaferro’s community meeting next month at Rutherford Sayre Park.