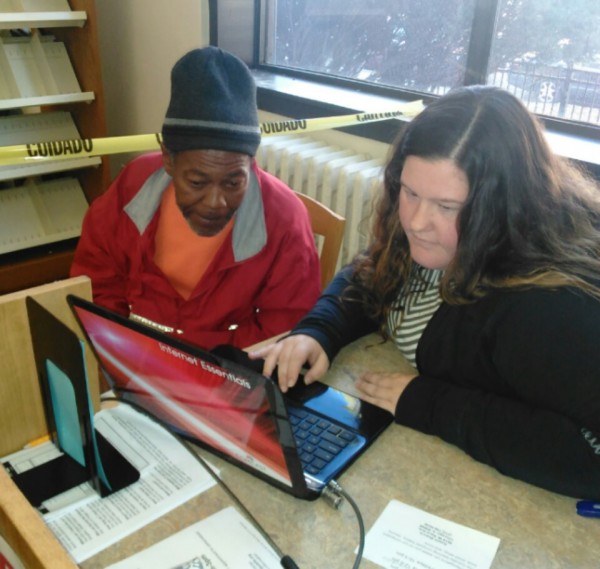 A laptop computer, a mouse and the internet.

It was all new to Austin resident Lamont Ballentine, who had never used a computer until now.

Ballentine doesn’t own one of his own, so he’s being going to the Austin Branch Library at 5615 W. Race Ave. A recent Wednesday was his third time there, working with the library’s cybernavigator on setting up his resume online.

“I did need the help, so I’m grateful because I didn’t know that you could come here,” said the 53-year-old, who just happened to come to the library one day to ask for help.

The front desk sent him over to Rachel Jaicks, the library’s cybernavigator. The Pilsen resident previously worked at libraries in Wicker Park and Bucktown before transferring to the Austin branch in September.

She spent about a half hour on that Wednesday with Ballentine finishing up his resume. Happy with the result and experience, he’s planning to sign up for a class at the library to learn how to use a computer on his own.

“Looking at these things (computers), you’re on your own. I don’t even know how to turn them on,” he said.

Mayor Rahm Emanuel announced in April his plan to increase the program, particularly on the West and South sides still stifled by a “digital divide.”

The mayor’s $10 million “Connect Chicago” effort includes having cybernavigators at all 78 library branches. The paid staff position is already at 49 branches, including Austin’s.

Ballentine is among many West Siders without access to computers or the internet, according to the Chicago Tribune. Broadband access on home computers and devices was lowest on the West Side compared to other Chicago communities, the Tribune reported.

Having a cybernavigator at your neighborhood library is one solution to the problem, Jaicks said.

Ballentine is typical of a lot of folks Jaicks sees – people, including elders, with little or no computer knowledge. Searching for jobs and setting up online resumes is where most people need computer help, Jaicks said.

For some elders in particular, computer use is a whole new experience.

“With seniors, you get some who are really excited about it, but you also get people who are nervous the whole time, and I’m like ‘it’s OK, we’re doing it,'” Jaicks said, adding that others are just frustrated by this new electronic world.

“When they applied for jobs, they just walked into the place and brought their resume. But you just encourage them; this is kind of the way the world is and there are people here to help you,” said the 27-year-old Jaicks.

Austin Branch Manager Jo Anne Willis said she’s glad to have her there.

“For a person who is not computer literate, all this stuff is beyond them. The cybernavigator makes it easier for them,” said Willis, who’s worked 10 years at the Chicago Public Library, including the last two at the Austin Branch. “Rachel does a great job. She just started here so a lot of people probably don’t know that we have someone here who’s available.”

Jaicks said she’s learned a lot herself working as a cybernavigator.

“I feel like I have a much better grasp on cyber security and what people need to watch out for on the internet, and also how people learn,” she said. “You learn what works for people and what doesn’t, and you learn how to be patient because this isn’t second-nature for a lot of people.”

A south suburban native, Jaicks, like other millennials, grew up in the computer and internet age. She said it’s easy for her generation to forget that others didn’t.

“A lot of people don’t know how to do this at all, so you have to give people an opportunity to learn it.”