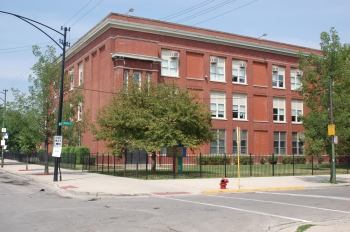 If Austin’s vacant Robert Emmet School is re-purposed as a community health center, local health care providers must be brought on as partners, some residents say.

The shuttered elementary school is the focus of a proposed $20 million conversion project. The re-purposed campus at the corner of Madison and Central would include health screening facilities, classrooms for health education and job training, and day care space.

The project’s backers include Sinai Health System and Oak Park’s PCC Community Wellness, which has an Austin clinic at 5425 W. Lake St.

The project is looking to partner with community groups, said Robert Urson, PCC’s president and CEO.

But Austin residents want assurances rather than promises. The campus, some believe, could help provide jobs and opportunities for neighborhood providers.

Dr. Julian Bowens of Jero Medical Suppliers, a Chicago-based provider of gowns, masks and other apparel, said her small company is usually shut out of such large projects. Bowens said local suppliers like hers, which is based on the West Side, should be brought on board with the Emmet project.

“You don’t have to look for partners, we’re right here in the community,” she said.

The proposed Emmet School project was announced at a public town hall meeting earlier this month hosted by Ald. Chris Taliaferro (29th). The alderman said this and any other proposed projects will be vetted by the community before anything is finalized.

Louis Armstrong Elementary, which has also sat unused since CPS closed it in 2013, has drawn similar interest by developers for re-purposing. Taliaferro said if other projects are submitted for Emmet, he’ll bring those to the community as well.

Residents have additional requests for the health care campus idea.

The proposed day care center would benefit by partnering with local providers in Austin, said community organizer Dwayne Truss. Malcolm X College, with its nursing and health program, is an obvious partner, Truss said. Some of Austin’s neighborhood high schools, as well as East Garfield Park’s Westinghouse College Prep, have medical careers programs to tap into, he added.

“There seems like an opportunity, if you get consensus behind the folks in the community, to partner with people who know those necessary skills,” he added.

Truss and other residents also want to make sure minority contractors are hired on any projects, preferably from the community.

The Emmet project has sparked interest but also much skepticism within the community. That reluctance stems from a long history people exploiting the black community.

“There’s a distrust because of the negative manipulation that’s been put on our community,” said Pastor Griff Taylor of New Sounding Joy Ministries, adding that he’s all for the “health care campus vision.”

The pastor, however, warns against allowing outside people to control black folks’ economic future.

“We can’t depend on them to train us for these jobs. What we need to say is, ‘What’s available?’ so we can train our people for those jobs,” Taylor said.

Urso said the project will hire from the community, and Taliaferro added that he’s reached out to some local providers already about the project.