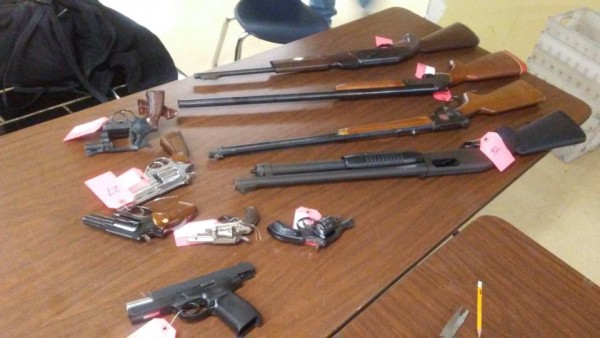 Forty-six firearms were turned in at a local Austin church Saturday, part of the Chicago Police Department‘s 10-year gun turn-in program to get weapons off the streets.

The program has netted more than 1,500 firearms this year from about a dozen turn-in events citywide. Since the program’s launch in 2006, just over 30,000 guns have been turned in, including about 3,000 replicas and BB guns.

In all, the department paid out $4,200 for real guns and $40 for fakes. Based on the department’s numbers, the city has distributed some $2 million in gift cards for actual guns and about $30,000 for replicas.

Residents are allowed to turn in guns anonymously.

One resident who did so told AustinTalks that she came traveled from the South Side after hearing about the event. The resident said she and her neighbors are active in getting people to get rid of their guns.

“I tell them, ‘Just drop it off at the fire station, just take it there and get rid of it,” she said.

A member and volunteer at her local church, she said there are just too many guns on the street now than ever before.

“Where else are they going to take them?” she said of the CPD program. “This is so important because these guns are just flooding into our community. Where are they coming from?”

Some residents are at first hesitant to come to such an event, Ford said. Some come inside first to take a look at what’s going on before returning with a gun, fearing that they’re going to be arrested, Ford said.

“We’re trying to calm their fears, and we’re trying to establish ourselves too, that this is a place where people can come,” Walsh said. “There’s a lot of people who I’ve talked to who are nervous about this process – can this gun be traced back to me?”

Residents are not asked to identify themselves or details about a firearm. They receive a number, which is called by one of the officers on the scene. Once a gun is taken and tagged with a number, residents receive their gift card and are free to leave.

Serial numbers are later checked to determine lost or stolen guns to be returned to an owner; the rest are destroyed. Any guns found to be involved in a crime can’t be traced back to an owner because of the program’s “no questions asked” policy, Ford said, adding that no one would ever turn in a gun otherwise.

CPD also reserves the right to refuse a weapon, she said. This was due largely to suburban and Downstate gun owners looking to dump their old stock for cash at these events, Ford said, adding: “We want this to be a neighborhood event for people who actually live in the community.”

The program collected 4,339 guns in its first year, according to a 2013 audit by the city’s Office of Inspector General.

Ford said anyone wanting to turn in a gun outside of an event should call 911 and an officer will come to pick it up.