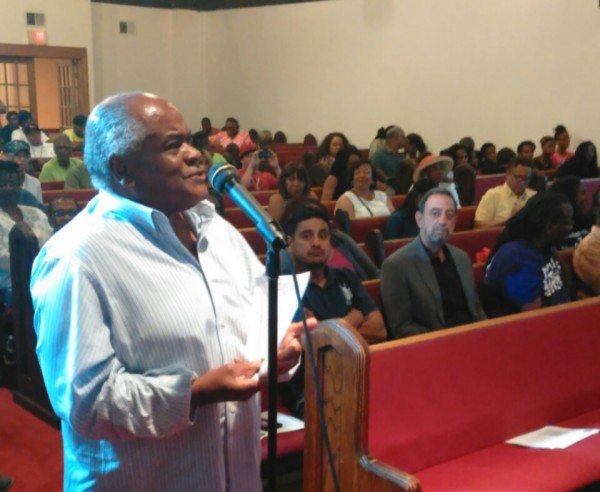 Some 60 residents sat in Greater St. John Bible Church for the listening tour that focused on Chicago’s “endangered population” of black neighborhoods. The 1st District commissioner will take his tour to the South Side next week but focused this week on Austin.

The event was tense as many residents spoke out in anger and frustration about their living conditions. Boykin and other elected officials and community leaders mostly listened.

“I’m tired. I’m 51 years old, and I’m tired,” said resident Brenda Thomas, who complained about the poor street lighting in her neighborhood that’s gone ignored by the city, and that’s also attracting criminals to the area.

“I need my light fixed. I’m afraid in my home. I’m about to get me a gun and start carrying it if I can’t come out of my home,” Thomas said.

“We got to start re-investing into human capital,” he said. “We’ve got to use every entity that we have. Each one of us in this room, we got about five or six levels of services that we can tap into.”

Passions and frustrations remained high during the two-hour meeting.

“I and many of my people are living in a nightmare,” he said. “We’re looking at confusion, fear, helplessness, hopelessness and, above all, anger.”

Much of the anger was directed toward the elected officials themselves.

Too many city lawmakers have sided with Mayor Rahm Emanuel over their constituents, many said.

One resident urged his neighbors to vote those lawmakers who backed Emanuel’s tax and fee increases out of office at the next election.

In response, Austin Ald. Chris Taliaferro (29th), said the mayor often withholds resources from wards whose aldermen oppose him. Needed resources, Taliaferro insisted, should not be used as bargaining chips by the mayor.

The first-term alderman added that he voted against those tax and fee hikes because they weren’t in the best interest of his constituents. (Taliaferro was one of 10 aldermen who voted “no” on a new water and sewage tax, according to Progress Illinois.)

The room’s anger, however, included some hope.

Some young people also took to the mic to offer solutions and their personal story.

Terry Keivious, 24, said he’s seen and experienced every hardship imaginable, including a stint in jail. He said he’s left that life behind and encouraged other young folk to choose a better path. Keivious also strongly supports having more youth programs.

“I’m living proof that they work. If they didn’t work, I wouldn’t be here,” he said.

Boykin said the solutions discussed this week at Greater St. John and other meetings will be put into an action plan and presented to the city, county and state leadership.