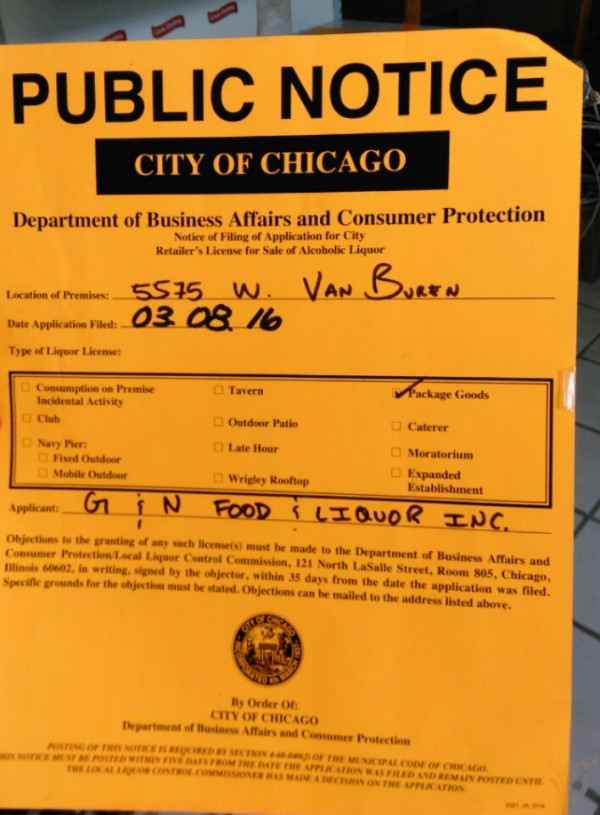 Reginald Mitchell was walking down his west Van Buren block this summer and had to do a double-take.

Workers inside a shuttered liquor store at Van Buren Street and Central Avenue were inside fixing up the place.

Mitchell, a longtime resident in the south Austin neighborhood, was surprised because he and other neighbors thought they’d closed that corner store for good last year.

Dar Raf Food and Liquor Store had occupied the space at 5575 W. Van Buren until June of last year, said Mitchell, who’s joining other neighbors in a petition drive to ban liquor sales in their 42nd Precinct.

Chicago residents can use an election year referendum to vote a precinct “dry,” and residents in the 42nd are eyeing spring 2017 to accomplish that.

But a vote next year will likely be too late to stop G & N Food and Liquor from opening at Van Buren and Central.

The new business filed its liquor license in May 2015, according to records from the city’s Department of Business Affairs and Consumer Protection. The license, which expires in 2018, was approved in May of this year.

“As far as I’m concerned, this license was brought in without the residents being notified of the outcome,” Mitchell said, insisting he and other neighbors only learned of its existence in March. Records from the Business and Consumer department show that G & N completed its license application March 3.

“I just happened to be walking by and seeing them working to put the shelves in,” Mitchell said.

Also troubling residents is how a new liquor store got approved despite their alderman’s objections.

Ald. Chris Taliaferro said he never received prior notice from the city about G & N’s license.

The alderman did say he met on three occasions with the owner, George Habeeb, who was seeking his support to open the store. Taliaferro said he told the owner each time that he wouldn’t support a liquor store or any business that’s not supported by his constituents.

Habeeb tells AustinTalks he doesn’t want to get into a “he said, she said” with the alderman and declined to discuss details of the conversation.

But he insists he did everything right and proper to attain his license for the Van Buren and Central store. He said he was surprised by some of the community opposition to his opening.

Habeeb added that he’s received support from many in the neighborhood. On a recent afternoon while getting the store ready, Habeeb and his cousin Nicola Eseed talked to a few people on the street inquiring when the store will open, including a woman who said the block really needs it.

He expects to open the store within a month.

Taliaferro said he learned of the license approval via an email from city officials to his general ward email account but not his direct alderman’s account. Taliaferro said he should have been notified more directly, adding that no liquor stores should open without an alderman’s or the community’s backing.

Habeeb said, to his knowledge, no one was misled about his license application, which took months to approve. As for community concerns, Habeeb said he had not heard any until recently – within the last month or so.

Habeeb, who also owns ABH Food and Liquor at 5345 W. North Avenue, said he wants to work with and invest in the community. Habeeb, who’s been in business for 30 years, said he plans to spend some of his proceeds on youth and other neighborhood needs, as he’s done at his North Avenue location.

“We want to help the community. We’re not here to harm the community,” he said. “This is what we do and who we are. Why would I jeopardize my reputation and my business by doing something like that?”

Habeeb added that some community fears may be tied to problems with the previous store at that location. He insisted his new store will be run professionally, and he wants to talk with any resident who’s worried.

He was also highly critical of Graham for the number of pawn shops opened in the 29th Ward under her watch.

Taliaferro, however, said he doesn’t believe his first term is tainted by a liquor store opening under his watch.

“I don’t think my promise to anyone has been violated because I will not support this or any other establishment without the support of the community, especially a liquor store.”

The alderman also expressed support for the precinct petition drive.

Residents have spent the last month canvassing the precinct for signatures. To date, they’ve collected some 200, said community organizer Dwayne Truss, one of the petition drivers for the precinct.

The number of required signatures for a precinct referendum must meet a certain threshold, according to the Chicago Board of Election Commissioners.

Truss and other residents said they plan to far exceed that threshold to ensure their precinct goes dry.

The 42nd’s boundaries are Central Avenue east to Lotus Avenue, and Flournoy Street north just beyond Jackson Boulevard. If it goes to a referendum and gets approved by voters, the 42nd would become Austin’s 36th dry precinct.

Residents say they want to ban liquor stores because they attract crime and loitering. Reginald Mitchell said he’s even seen people drunk outside the old store. He and other residents would prefer anything else to open there.

“It can be grocery store,” Mitchell said. “As a liquor store, all it’s gonna do is bring the undesirables back to our community. That’s where the problem occur at. Our No. 1 thing is we have to think about the kids in the park, think about the seniors that ride the bus next to the store.”

Lula Ward, an elder who lives across the street from the liquor store, said she rides that bus.

“My concern when they were open is so many people standing around; I’ve seen a few drinking,” she said. “My thing is it’s so close to the park. That’s where the kids go. And when you got that open there, who knows what will happen.”